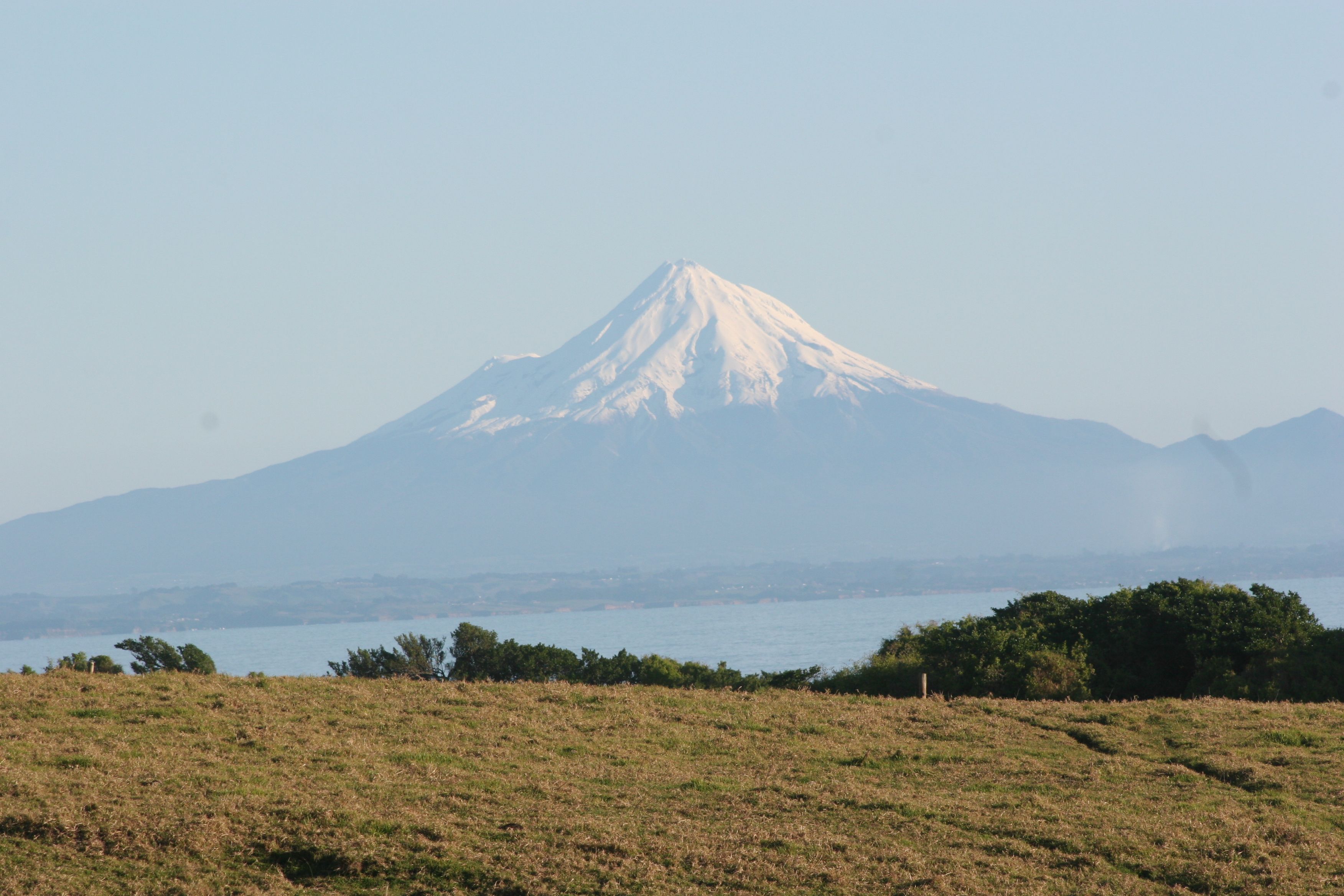 Day one started with a crack of noon start; a lazy lie in and a leisurely breakfast made even more pleasurable by the glorious sunshine and blue sky. Bach on 45 is basically a green painted shipping container shed with add ons, but cosy with a wood burning fire that we kept going all night. It is in a beautiful setting in the middle of an organic avocado and feijoa orchard with a view out to the coast. There is a babbling brook to the left as we look out, a small banana grove and a handily planted herb garden to flavour our senses and our food. Despite being the middle of July it was fine enough to sit outside at the glass-topped table for coffee and toast and bask in the late morning warmth of the sun. 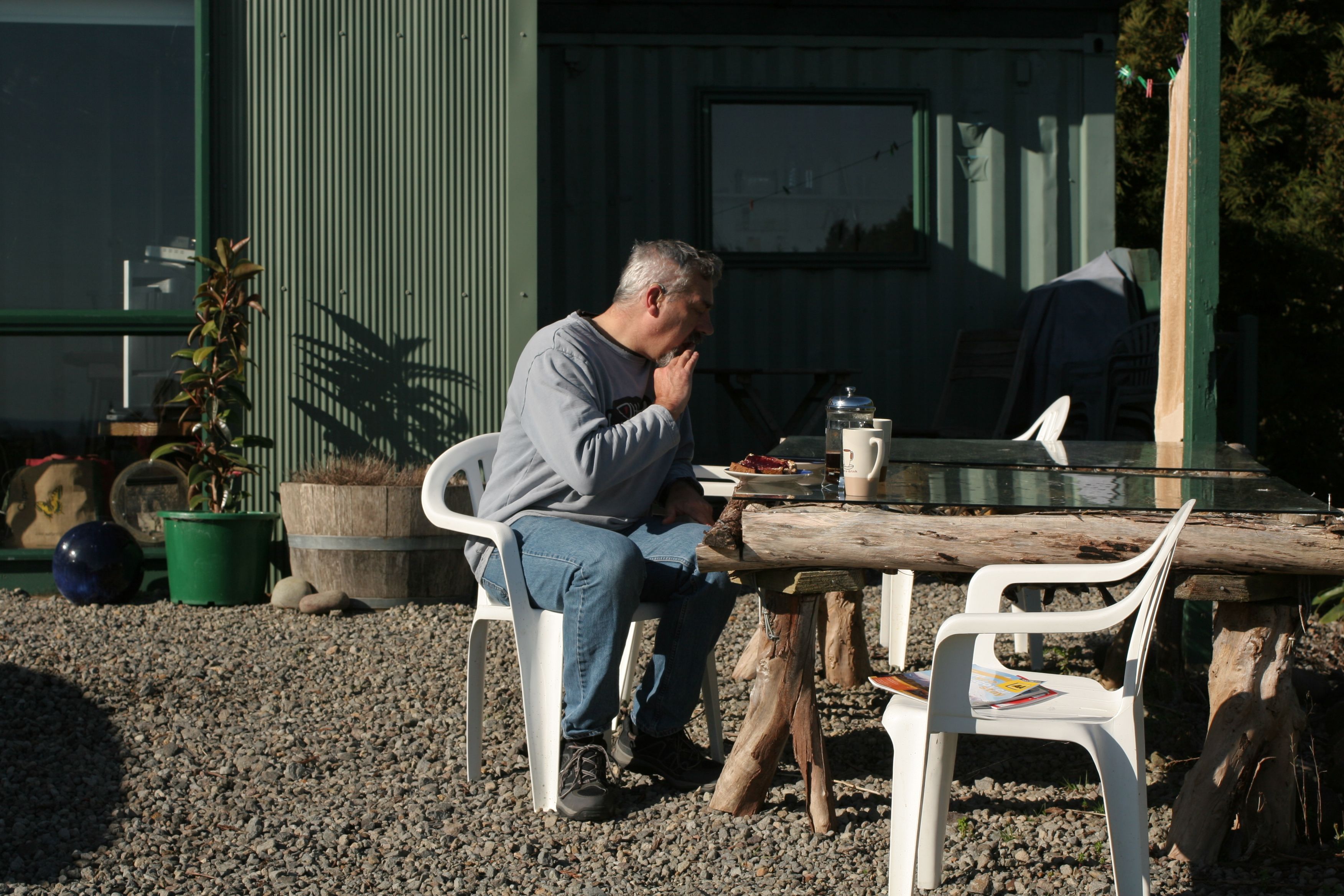 However, as usual, I was champing at the bit to get going and not waste a moment of the good weather and short time we had to explore. I had forgotten to bring the DOC brochures I had printed out hurriedly before we left so we decided that a trip into New Plymouth to Puke Ariki was the best thing to get some brochures and do the touristy thing. I was keen to do the 10km 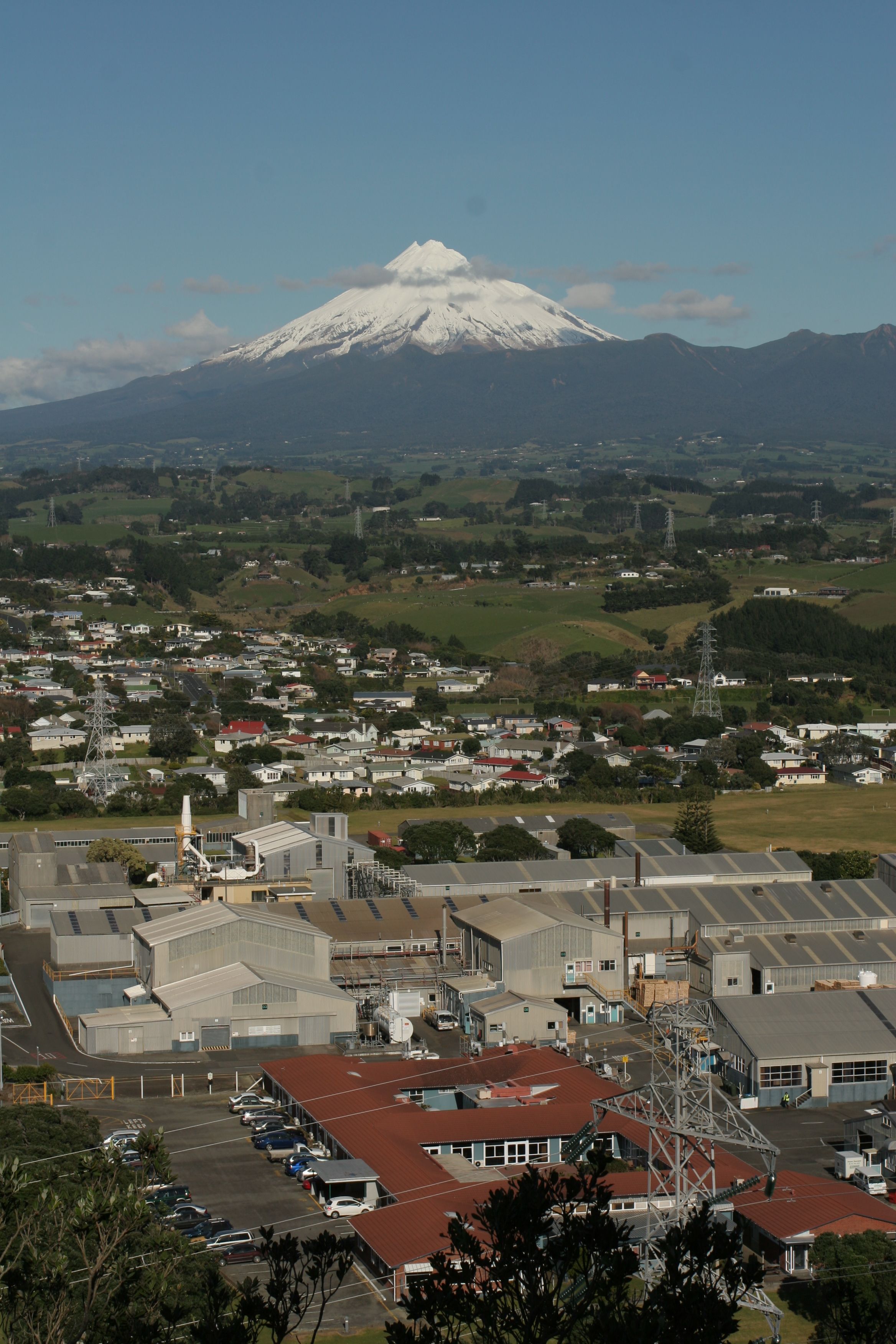 Coastal Walk on hired bikes as it looked interesting and was probably a good way to get our bearings. Puke Ariki, NPs i-Site and museum, is right by the sea and Ken Lye’s famous Wind Wand is on the Coastal Walk right in front of it, so once we had our brochures we went to the space around it to look at what we had picked up and make a decision. After much prevarication with me getting just a tad frustrated with the inaction, we decided to head to one end of the Coastal Walkway to see if we could hire bikes there since there seemed to be no sign of them at the Wind Wand. Paritutu Rock was located but no sign of bikes so we decided to do what we should have done at the beginning and ask at the i-Site where we could hire them; a couple of quick phone calls ascertained that two of the places suggested by the i-site were either closed for winter or out of business. We decided to climb 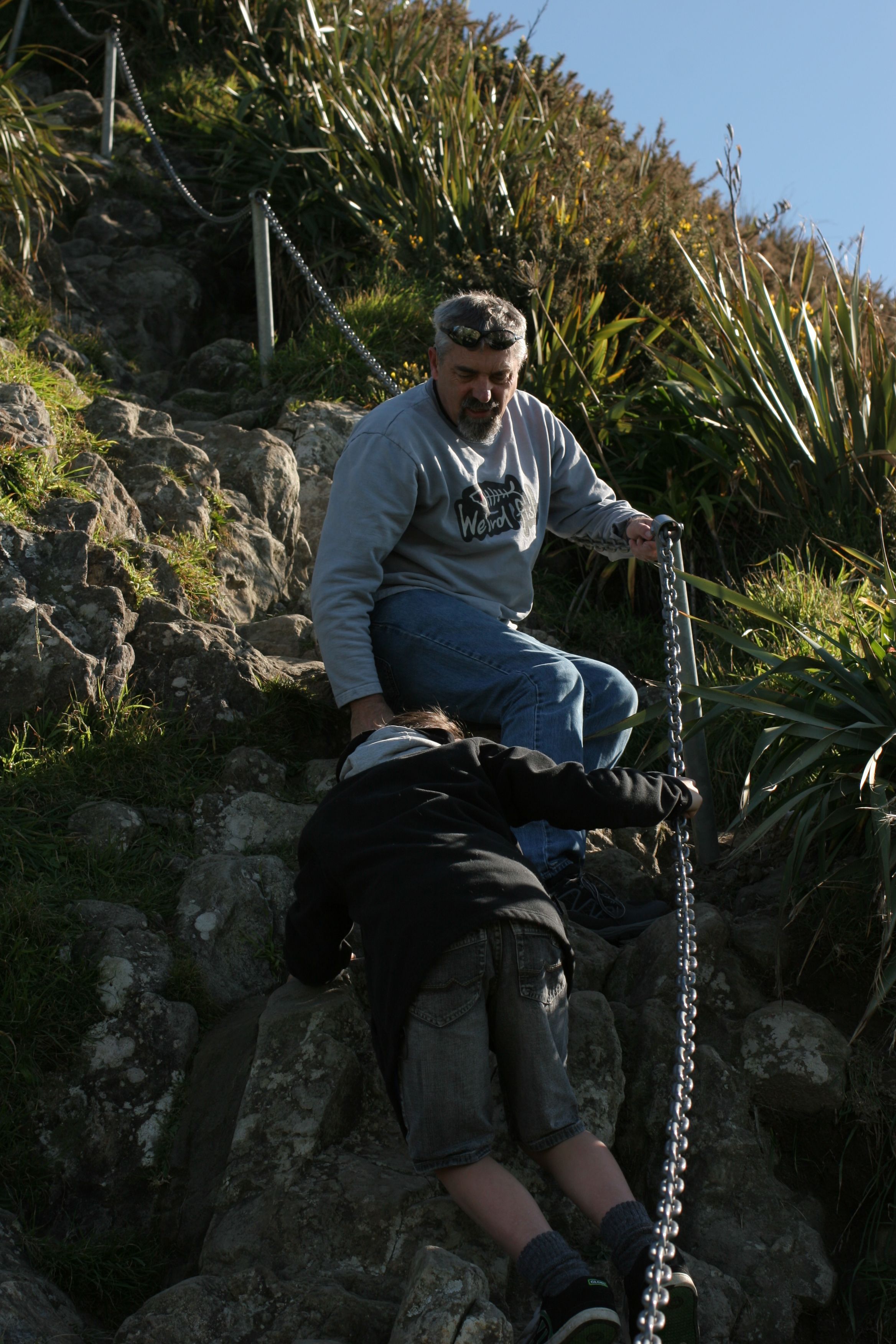 Paritutu Rock instead. Paritutu Rock is one of several large volcanic plugs by the coast and in the ocean. We started off climbing steps, steep but not difficult, which gave way, about halfway up, to natural rock and a safety chain. Aonghas is not happy with steep and high but with Nigel’s patient and calm encouragement – no mean feat since he is uncomfortable with heights out in the open too – he clambered up the rocks and made it to the top. Lachlan, of course, leapt confidently and agilely up at a rate of knots and was sitting waiting at the top for us. The height certainly provides great views over New Plymouth and the clear sky meant that the resplendently snow-capped Taranaki dominated the skyline but we could also see Ruapehu and Ngaruahoe over to the East. Coming down we passed a whole group of 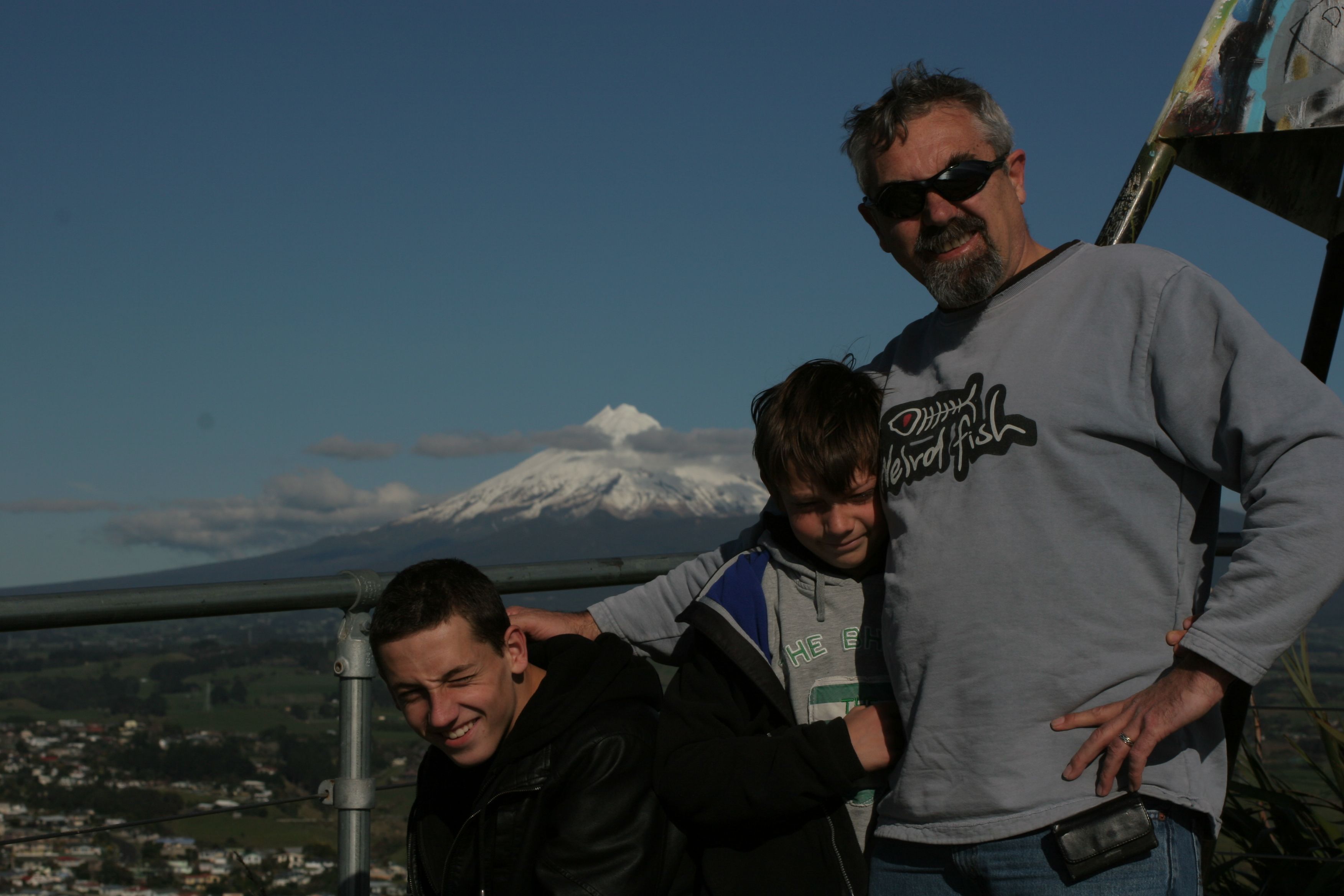 teenagers, nimbly climbing up armed with a tray full of bottles of pop – clearly Paritutu Rock is a favourite local haunt with the young of NP!

Aonghas decided that he deserved an ice-cream for such a sterling effort and so we headed into town to find a cafe. We stopped by a bike shop first to find out that we could hire bikes there so will probably go back later in the week. We realised that the effects of our 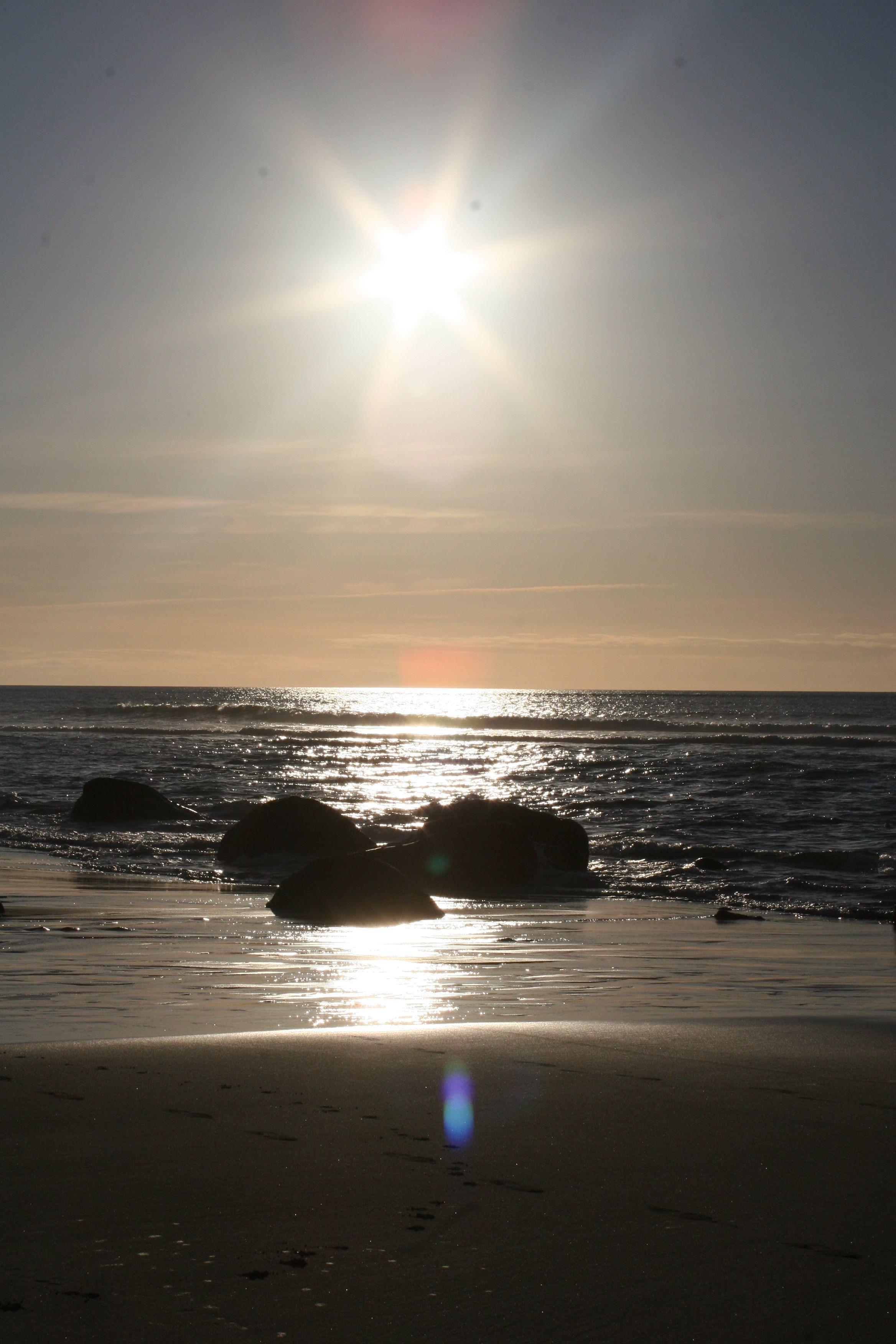 substantial breakfast had worn off so ice-cream turned into snack as we sampled the wares of Elixir on Devon Street. Wedges; home-made bread and dips and French toast were hungrily wolfed down whilst we decided what to do next.

I wanted to go to the beach and nobody seriously objected (or maybe I didn’t give them the chance!?) so we decided to explore the beach at Oakura. The black sand seems even blacker here than at Raglan and as we walked down the beach it waslittered with scattered rocks and boulders. I love the sea and the sea-shore, the sounds the smells, theuntamed, untameable nature of it all; it makes me feel excited, just a little scared of 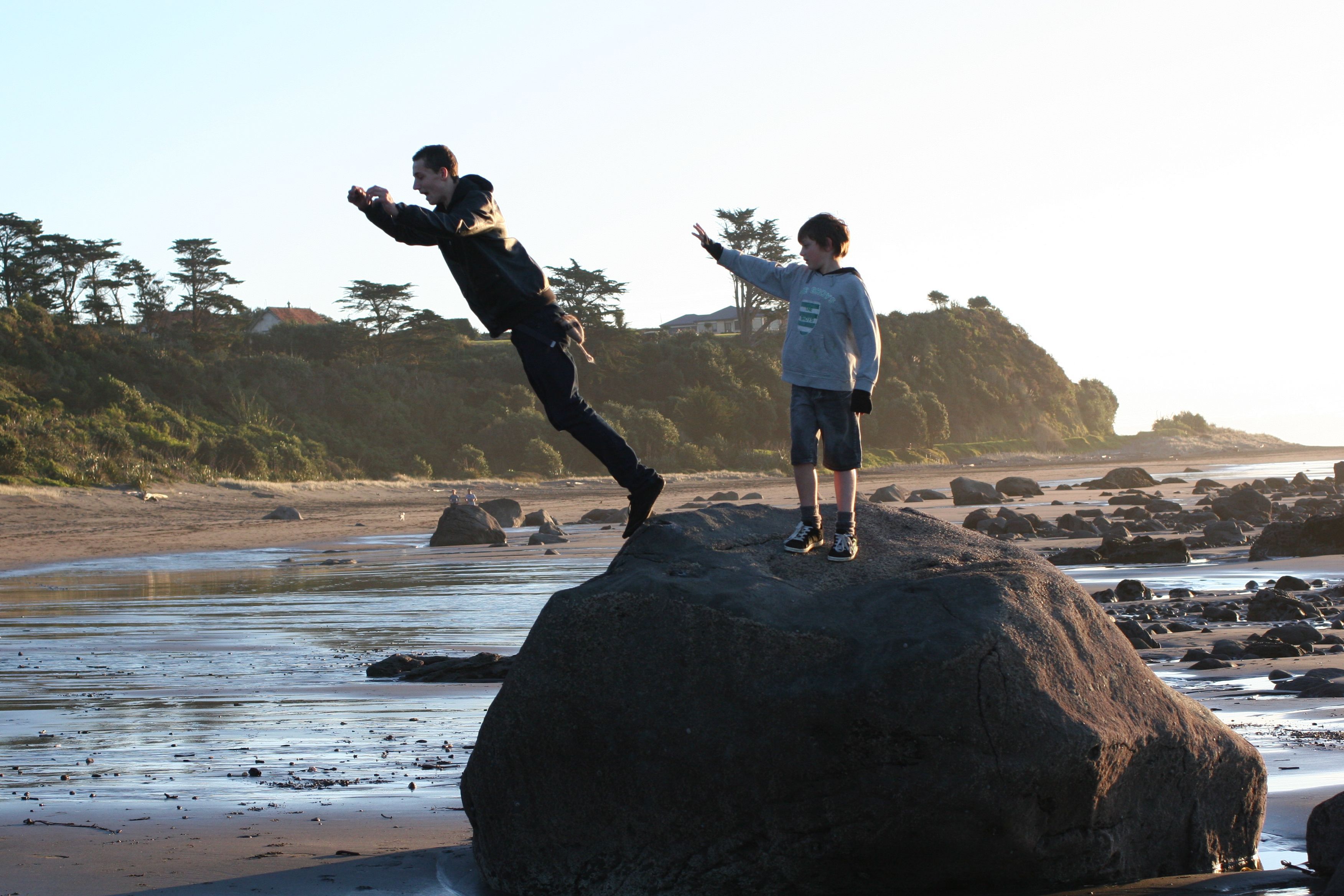 its power and I am mesmerised by the constant movement of the waves as they roll in, crash and then are sucked back out again. I took far too many photos of the sun shining on the water and even more as we watched it go down and it turned the world orangey-red! Time for tea!