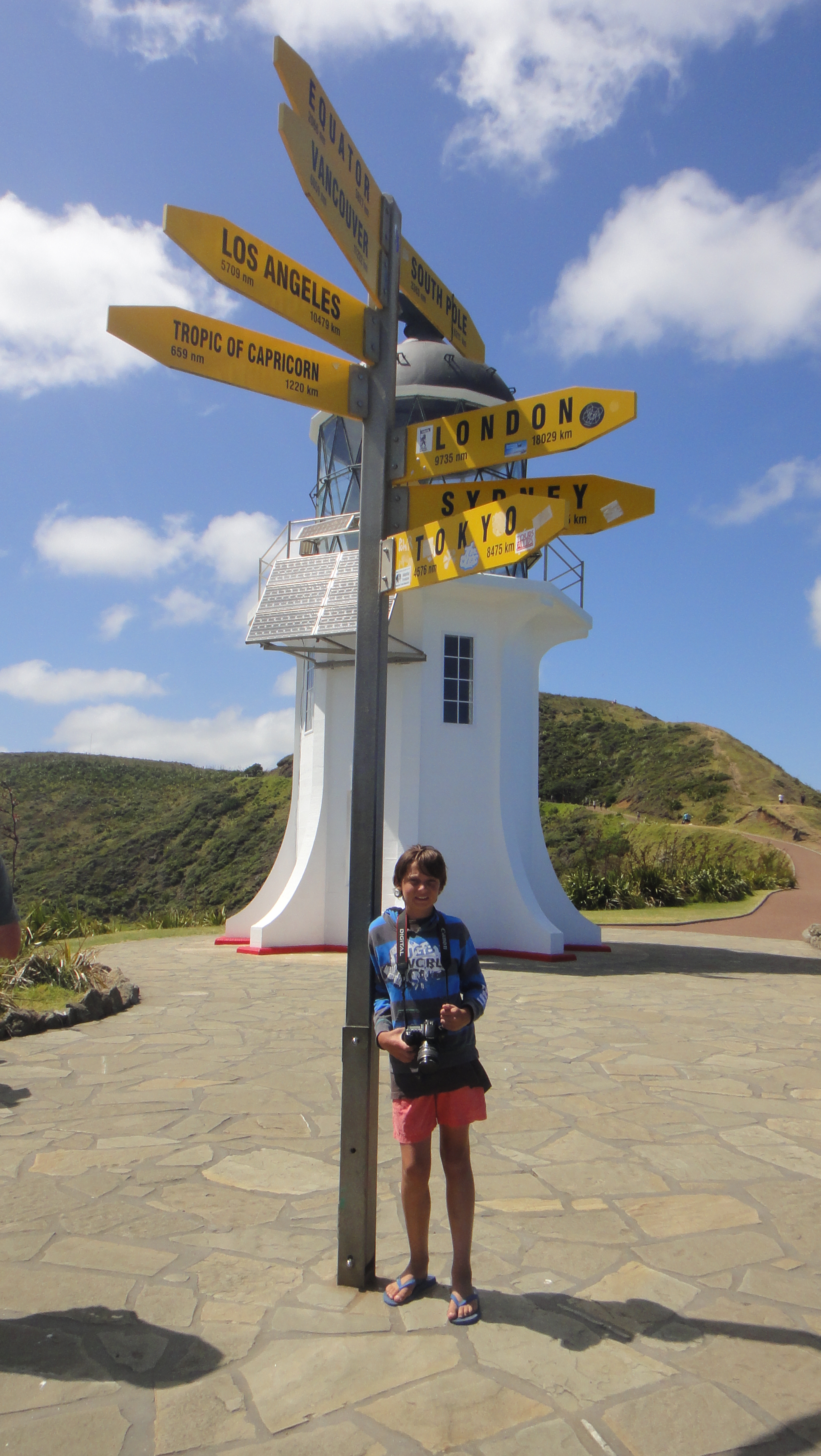 After last year’s trip to the “Top of the South”, this year we thought we would follow up with a trip to the “Top of the North”.  Very little planning and very late too but but we have car, tent and a map  – all you need for a road trip.  Lachlan didn’t get to come again as he was working.  Hard life when you are a teenager needing money to fund an extravagant lifestyle of Magic cards, trendy clothes and nights out with the boys!

We decided to head up the SH1, peel off at Brynderwyn and up to Dargaville.  This is Gumdiggers country – the whole economy from the mid 1800s to mid 1900s was predicated on digging the gum out of the ground where Kauri trees had fallen centuries ago  to ship back to Lancashire and Birmingham to make into varnish.  The gum is a bit like the white blood cells that form scabs to help the healing process when we cut ourselves.  When the Kauri trees are damaged the gum leaks out to heal; it collects in the crooks of branches and on the tree trunks.  Where the trees had fallen the gum was buried with them.  The gumdiggers probed for the buried Kauri trees and then dug down to find the hardened gum.  In areas where the Kauri trees were still standing they “bled” the trees for the gum.  Many of the diggers came from Dalmatia (what is now Croatia) and were known as Dallies.  They lived in shanty villages in huts made out of sackcloth or corrugated iron and baked earth sods.

Dargaville was once a thriving port but looks a little sad nowadays.  Nevertheless, there has been some effort at regenerating the place and we found a great little cafe for lunch.  It is situated on the curved reaches of a wide, brown, muddy, tidal river which is quite impressive from above.  The Dargaville museum is definitely worth a visit – we spent a good couple of hours in its tardis-like depths.  It is a treasure trove of collected memorabilia of life in the area; all manner of trinkets, household objects and tools of the trades undertaken by the inhabitants of the area.   However, despite an impressive display of lumps of gum and carvings made of  gum, gumdigging equipment and detailed explanations of how it was extracted and the lives of the gumdiggers, we left the museum still not knowing why the gum was mined!   We found out a little later in the day when we stopped at a shop selling Kauri woodware and gum jewellry.  The main market for the gum was England and the USA where it was made into high quality varnishes.  As the supply of gum dwindled and the good quality lumps were dug out, the smaller, low grade gum was used to make glue.  Eventually, the trees that had been “pegged” to bleed the gum out of them died and fell, the deposits in the already fallen trees was too deep and difficult to dig for and the gumdiggers had to find something else to earn a living.  Many of them stayed in the area, some had made enough money to buy land and turned to farming, others had other trades such as carpentry, building or ironmongery.  It was mostly single men who came over from Croatia; they settled with Maori women and stayed, others went back to their families in Croatia or had already brought their wives and children over.  It is strange to see the many road names with the “ich” suffix and shops and businesses with Eastern European names.

We found a great DOC campsite at Trounson on the edge of the Waipoua Forest where we stayed a couple of nights.   It seemed quiet when we first arrived late in the afternoon but by 10pm the place was full.  We are used to DoC sites with minimal facilities so were surprised to find that there were proper toilets, hot showers and a fully equipped kitchen.  The place is well known for being able to see kiwi at night, so as the sun went down we headed off into the bush with a red torch trying to walk as silently as possible.  (Not very silently with a teenage Aonghas!) The forest was like Piccadilly Circus, red lights beaming everywhere and the footfall and whisperings of  probably a hundred or so people along the 3km of track!  We were excited when we heard kiwi calling and scuffling in the bush but we didn’t see any.   Nigel and I decided to do the whole walk the following night; we set off early to avoid the crowds but despite sitting quietly in several spots for extended periods of time and hearing them again, we still had no luck sighting any kiwi.

One of the main reasons we had gone to Waipoua was to see the giant Kauri.  We didn’t manage to get this far north when we came to NZ in 2005 on holiday and the Kauris have been on our wishlist ever since.  Once upon a time the Kauri covered the northern part of New Zealand.   Huge swathes of forest were buried in some sort of cataclismic event hundreds of thousands of years ago, but the forests regenerated and when the European settlers arrived in the early 1800s they quickly recognised that these mighty trees with their long straight trunks were invaluable for ship building, houses and furniture.  The timber industry, like the gum digging was to decimate the Kauri population as trees were felled to send to America and Europe.  Thousands of tons of timber was wasted as the methods for getting the logs from the hillsides down to the ports was brutal.  Like anything that seems plentiful, the people benefiting from it don’t see the long term effects of their actions.  Now there is a huge conservation and regeneration project underway to re-forest the land with these beautiful and majestic trees.

We were amazed at the number of large Kauris that are in this forest.  Up until now we have seen the odd large Kauri and stands of young Kauri in the forests in the Coromandel, and in the Waikato.  Here in Waipoua Forest there seemed to be a significant number.  It is difficult to know how healthy the Kauri are as the 21st century has brought a new blight – Kauri dieback disease.  Interestingly though, whilst we had to disinfect our footwear to prevent spreading the disease in the forest area around Trounson, there are no such measures in the tourist areas where the large Kauri trees are.

Tane Mahuta is the tallest Kauri tree in New Zealand and it is truly impressive.  So too are the other trees we walked to; The Four Sisters – four Kauri fused together at the lower trunks that then soar high up together;  Te Mata Ngahere, the second tallest Kauri.  We also walked past Cathedral Cove which is a group of Kauri in the middle of the forest that tower up like the columns of a gothic cathedral to Yakas whose roots are protected by a boardwalk which means that you can get up close for some “tree-hugging”.  The walks through the forest are all on prepared paths and boardwalks and visitors are urged not to stray from the path as the shallow feeding roots of the Kauri are delicate and easily damaged.  The Kauri are inspiring and I am ever reminded about how small we are in a world that can produce such beauty and splendour.