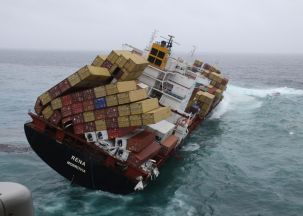 The newspapers here have been full of the World Cup – the NZ Herald has even had a special section for the last 4 weeks called The Rugby Herald.  The front pages of all papers have been dominated by RWC matters, Dan Carter’s groin, referee’s decisions, Tindall’s kisses, England party boys, oh and some rugby too!  Today for example the main part of the NZ Herald has pages 1 – 5 dedicated to the RWC and then 10 pages of the Rugby Herald.  There are 6 pages of National news, 5 pages of World news, 2 pages of other sports news, and 4 pages of Business news!  I think this illustrates very clearly what makes the average Kiwi tick!  Lost in amongst these very important news stories this week is one of the biggest maritime ecological disasters to befall NZ in years.  The Rena – a container ship has run aground on the  well-known, well-documented and charted Astrolabe  reef  just a few kilometres off the Tauranga coast.  The Rena has been stuck on the Astrolabe reef  now for 12 days.  So far it has leaked more than 350 tonnes of oil into the water and approximately 80 containers have fallen off the ship.  Bad weather is threatening the clean up and the pumping of the remaining 1000 or so tonnes of oil still on the Rena,  and there is a very real risk of the heavy swells shifting the ship off the reef and it breaking in half.    Beautiful, golden beaches are thick with oil and thousands of volunteers are helping clean up.  (I have volunteered but have not been called up yet!)  Sea birds including rare Blue penguins and petrels are being washed up coated in oil and wildlife experts are working hard to rescue them.  Many more are beyond help.  It threatens to be the biggest ecological disaster to hit NZ and it clearly comes second to the rugby!   I love this story, though – jackets for the Blue Penguins to keep them warm and stop them from preening their feathers and ingesting the deadly chemicals from the oil and the cleansing agent.  We don’t live far from Tauranga and head over there to swim and play in the surf reasonably regularly.

The coastline is beautiful and the bay is also home to small islands, some of which are wildlife reserves.  They are all threatened by the oil, the islands especially because they have rocky coastlines rather than the sand of the mainland and the oils gets under the rocks and is almost impossible to get rid off.  We are watching the progress of the Rena closely and hoping that the oil can be pumped off before too much more of it escapes to damage the fragile maritime ecosystem.

But, like the rest of the country I will come back to the rugby!  Desolation for the Welsh on Saturday evening!  The papers are full of the injustice of Warburton’s sending off.  the negative way that the French played following it and the pluck of the Welsh for taking the game to the French!  As far as NZ is concerned Wales won and France lost.  They didn’t have many friends before the game and they have even fewer now!  We sat in our living room like the rest of the country urging the Welsh on, hoping that their 14 men would overcome the 15 Frenchmen, and they so nearly did!  There were thousands of Facebook comments on the RWC FB page all criticising the referee, the way the  French played and extolling the virtues of the attacking Welsh.  However, the simple fact remains that France did win and they will be playing the All Blacks next weekend in the RWC Final.  And that is the delight in the title of this blog – delight that the ABs beat the Wallabies – not just beat them but annihilated them, and now all the hype is around what they can do to the French on Saturday night.  Let’s just hope that they don’t choke on their dreams!