Easter fell early this year which meant that we had a very welcome five day break during term time.  Despite having lots to do both to catch up and in preparation for work as well as house and garden maintenance, we decided that we needed to get away.  A break from technology, computer screens   and brain strain was definitely needed.  So we headed off to Dickey Flat to go camping with some friends who have a boy the same age as Aonghas.

Dickey’s Flat is in Karangahake Gorge which is famous for the goldmining that took over the area during the “Gold Rush” in the 1800s.  We had had a day out there a few weeks ago to cycle the Gold Trail and were fascinated by the history of the place.  It is amazing to think that what is now a quiet, rural area was once the throbbing hub of a huge industrial community.  The rusting dereliction of the massive cyanide tanks that were used to extract the gold are overrun with plants as nature reclaims its place.  Swathes of forest and bush were cut down and cleared to build the gold processing plants; ancient tall Rimu, Kauri and other trees were felled and used for beams and buildings or shipped off to Europe and America. 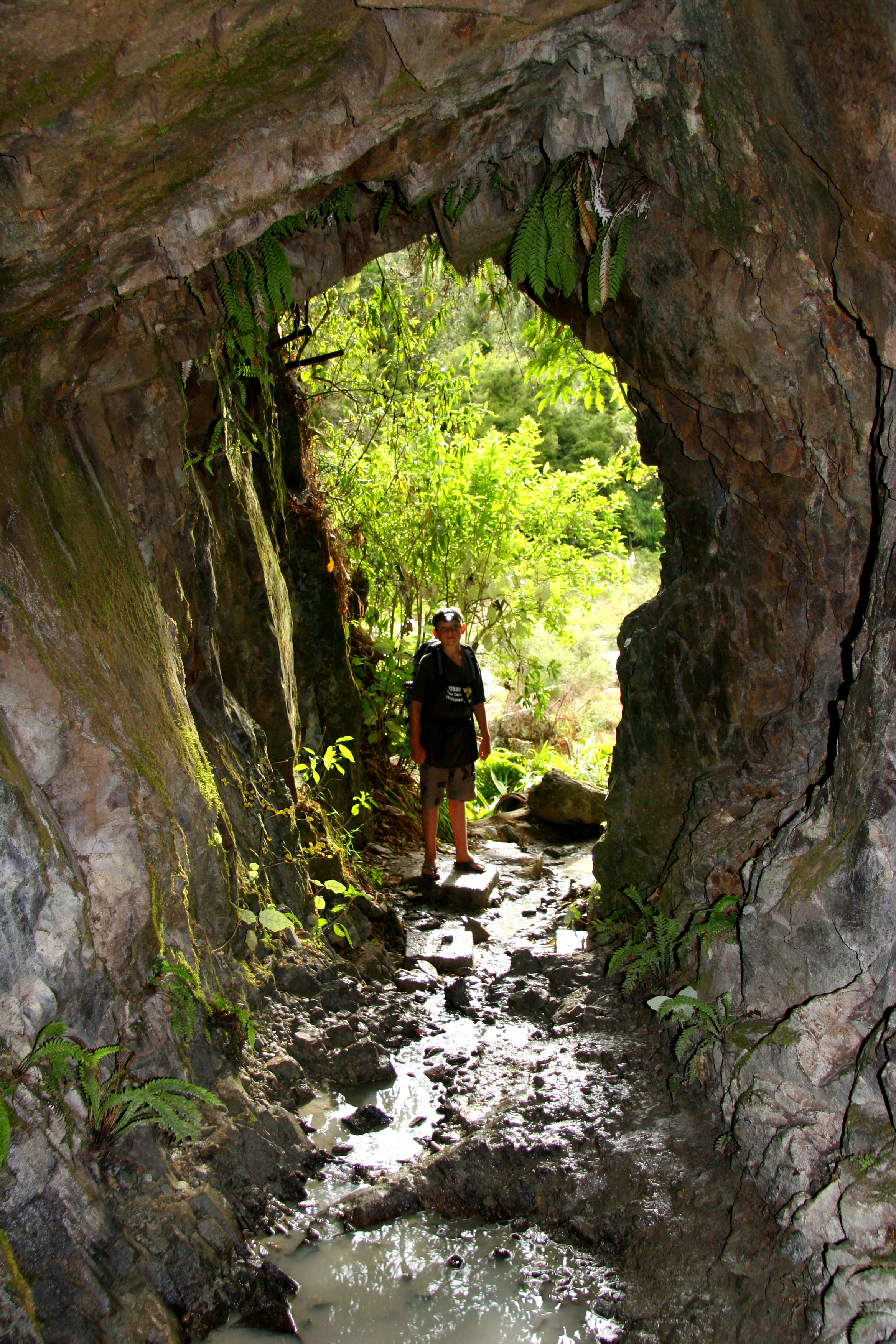 There is evidence in the river that flowed through the campsite of the pipeline that was built by the miners to carry water between Waihi and Paeroa; mill races where the river was diverted to create deeper channels to drive the machinery.  The access tunnels that were cut through the rocks are now used to get to the waterholes where we dived off rocks, swam and explored the river bed hopping from rock to rock and wading across swirling pools.

Despite the busyness of the campsite – we struggled to find a spot on Friday lunchtime and had to carry all our gear a good three of four hundred metres from our car to the site and estimate that there were probably a seventy or so tents on a site that DoC reccommend is for 35 – it was remarkably peaceful and relaxing.  The densely packed “teenage village” that sprung up opposite us during the early evening only really disturbed us after midnight when they decided to play spotlight in the woods behind us! 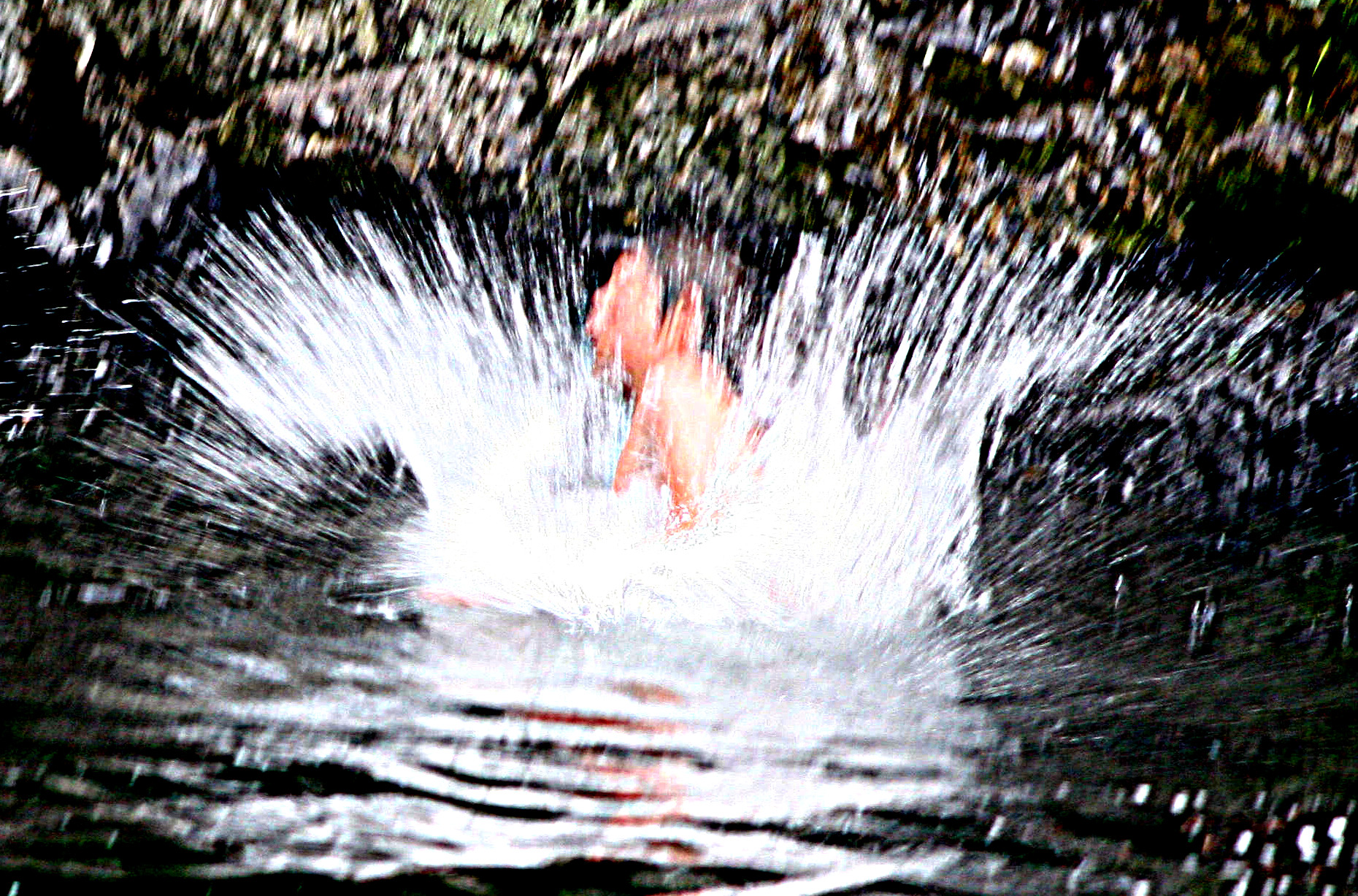 We spent most of our time playing and swimming in the river, lazing around the tent reading, playing cards or watching the boys doing all of those things.  On Easter Sunday,after the obligatory Easter Egg hunt, we decided that we should really do something active to counteract the copious amount of food and wine we had consumed so we consulted the brochures, looked at the map and talked to a friendly ranger. 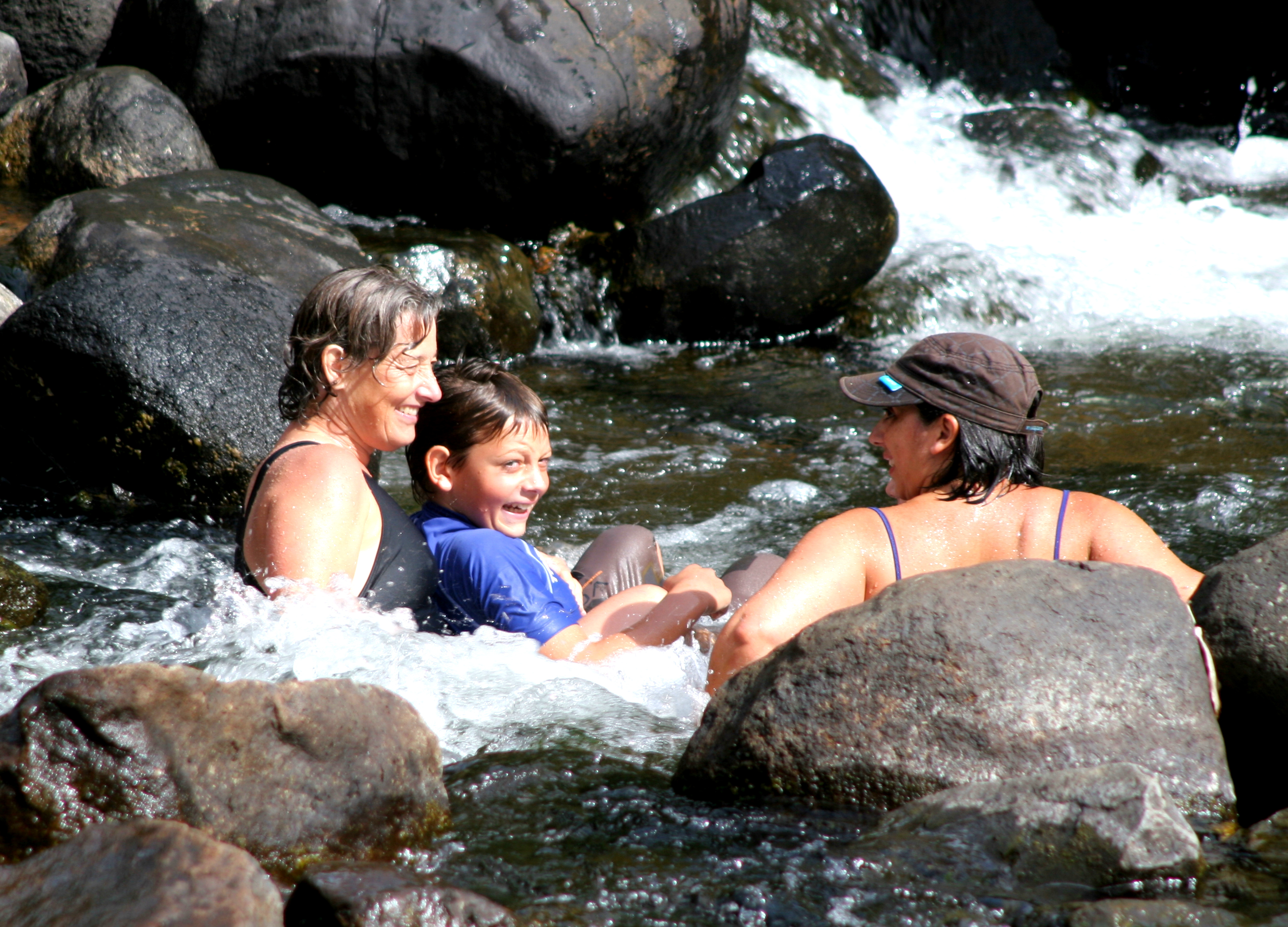 He suggested that the walk we were interested in would probably take us about two hours, that if we drove out of the campsite and parked our car at the other end and walked back to the campsite, it would be mainly downhill and easily manageable for the average person.  Teresa was happy with that; two hours was at the limit of her comfort zone but downhill would be fine.

So off we set.  “This is quite a long way in the car.” says Teresa, as we drove to the start of the walk.  “We’re coming back on ourselves though,” says Denny, “so it’s not that far”.   Hmmm! 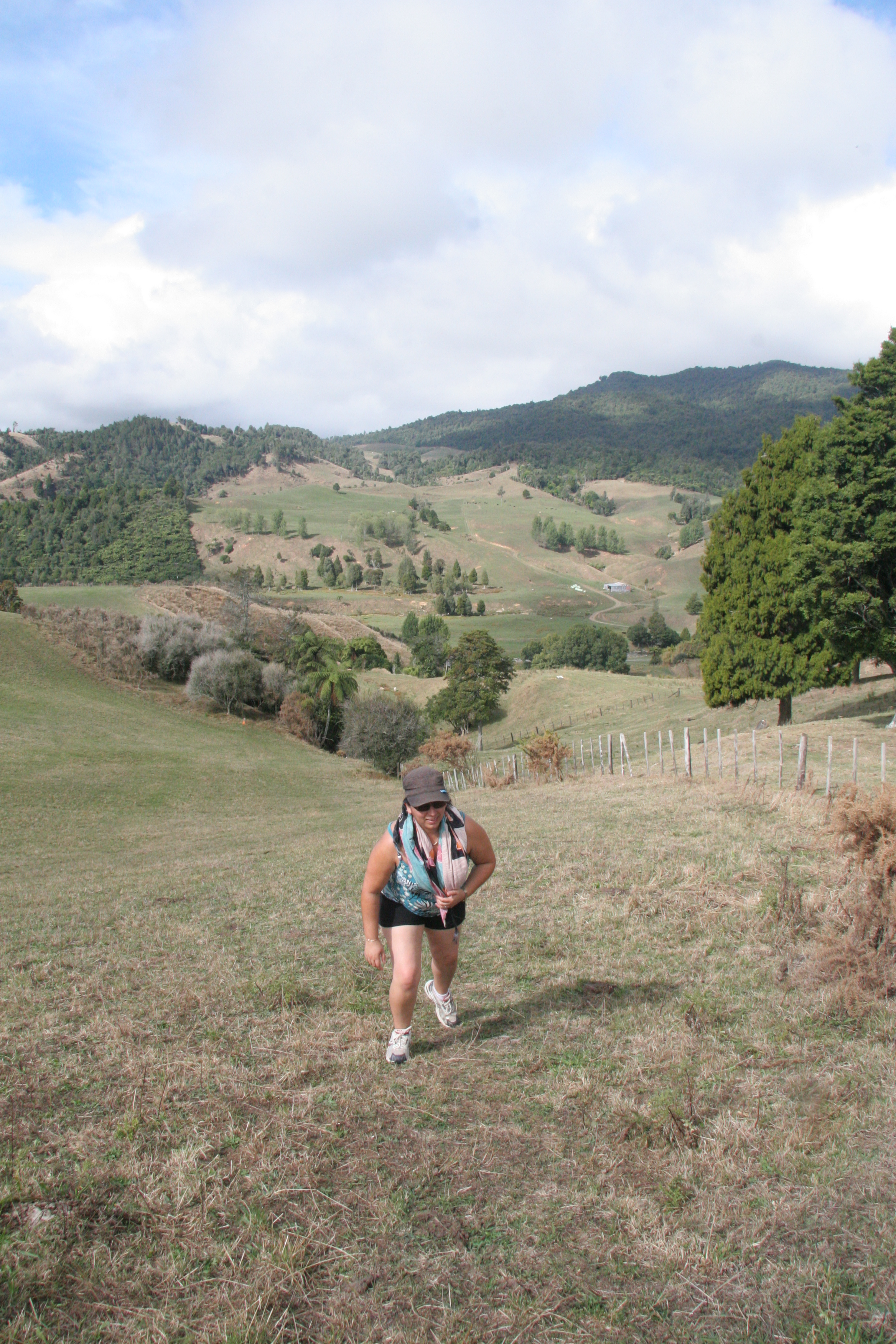 The first part of the walk was UPHILL through some paddocks.  It was hot. It was tiring.  And if there had been one more field of up, Teresa would have stopped and turned back.  However, we started to go down, and we were in the bush so we were shaded from the sun.  The views from the paddocks were beautiful and it was interesting to note the difference in the colour of the grass in the different fields.  We are in the middle of a drought here in the North Island and the ground is dry as a bone.  The river is about two feet lower than it had been when Teresa and Denny were here last year at the same time.  We walked up through paddocks that had also clearly been sprayed to kill the gorse as all around us it was brown and dead.  Gorse is an invasive species that was introduced to NZ by the English and Scots settlers and it has all but crowded out many of the native species in many places. 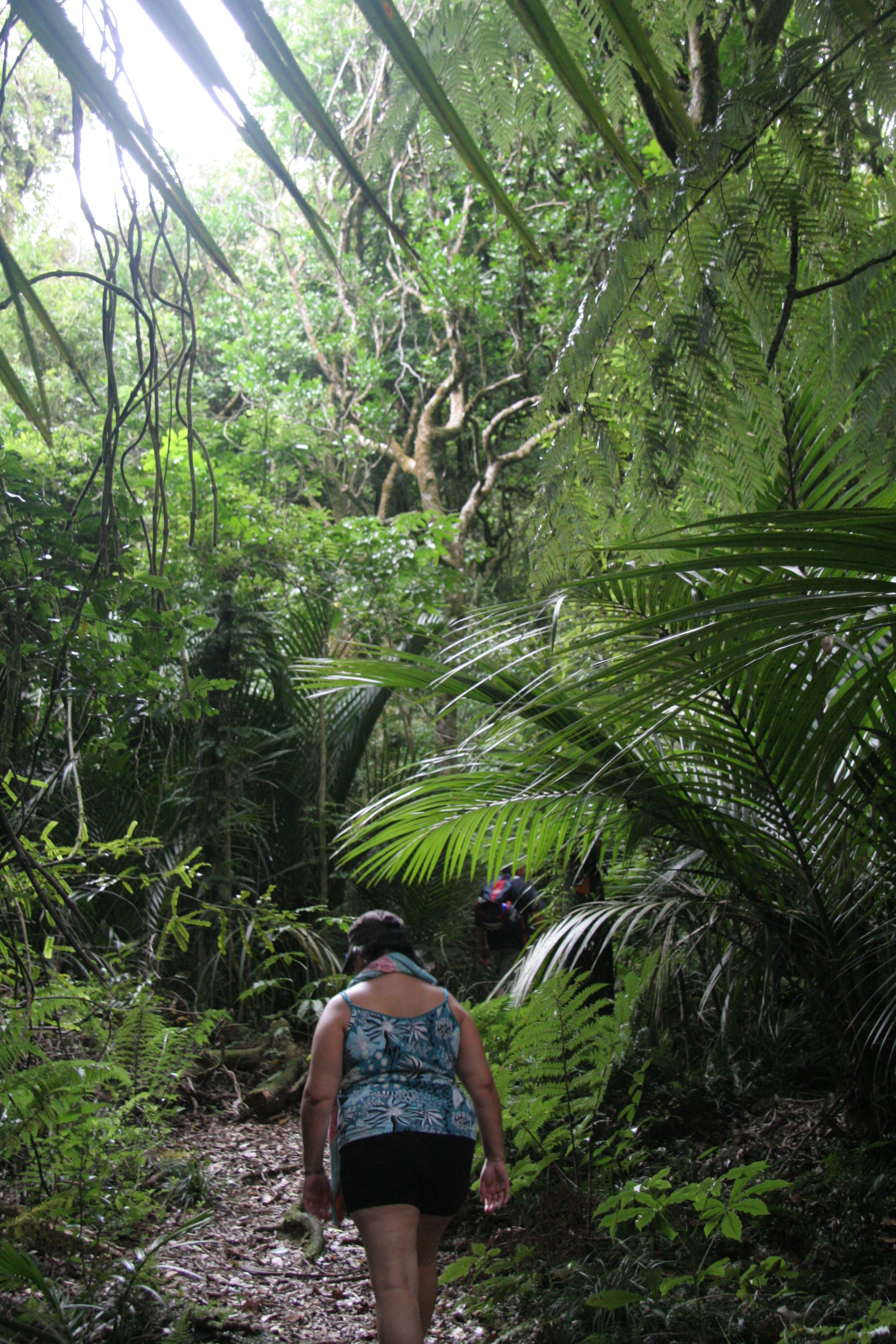 The lusher bush and the shade that it brought was welcome but the downhill was short-lived as we followed the undulating path.  The ranger had told us that there was a section that, in reverse, was almost too steep to walk upright, but that downhill was more negotiable especially in dry weather where there was no mud to slide on.  We anticipated that it wouldn’t be long until we got there but as we made our way up and down through the bush it seemed like it would never come!  We stopped frequently to take photos and drink.  The bush was varied and as we descended – we were on a gradual descent despite the ups in between – the flora changed.  We noticed it most as the light changed where it had more space between the trees to get through to us; when the plants were dense and low we sensed the moisture they gave off, and when the trees were tall we could feel the draught of the breeze and the light as it filtered down to us through the branches.

The steep dowhnill finally came; it would definitely have been treacherous if it had been wet, but the extreme aridity meant that the ground was little more than dust which shifted as we descended and we almost rode it like powder snow or scree, at times only just in control. Teresa used the trees to bounce off like in a game of pinball! 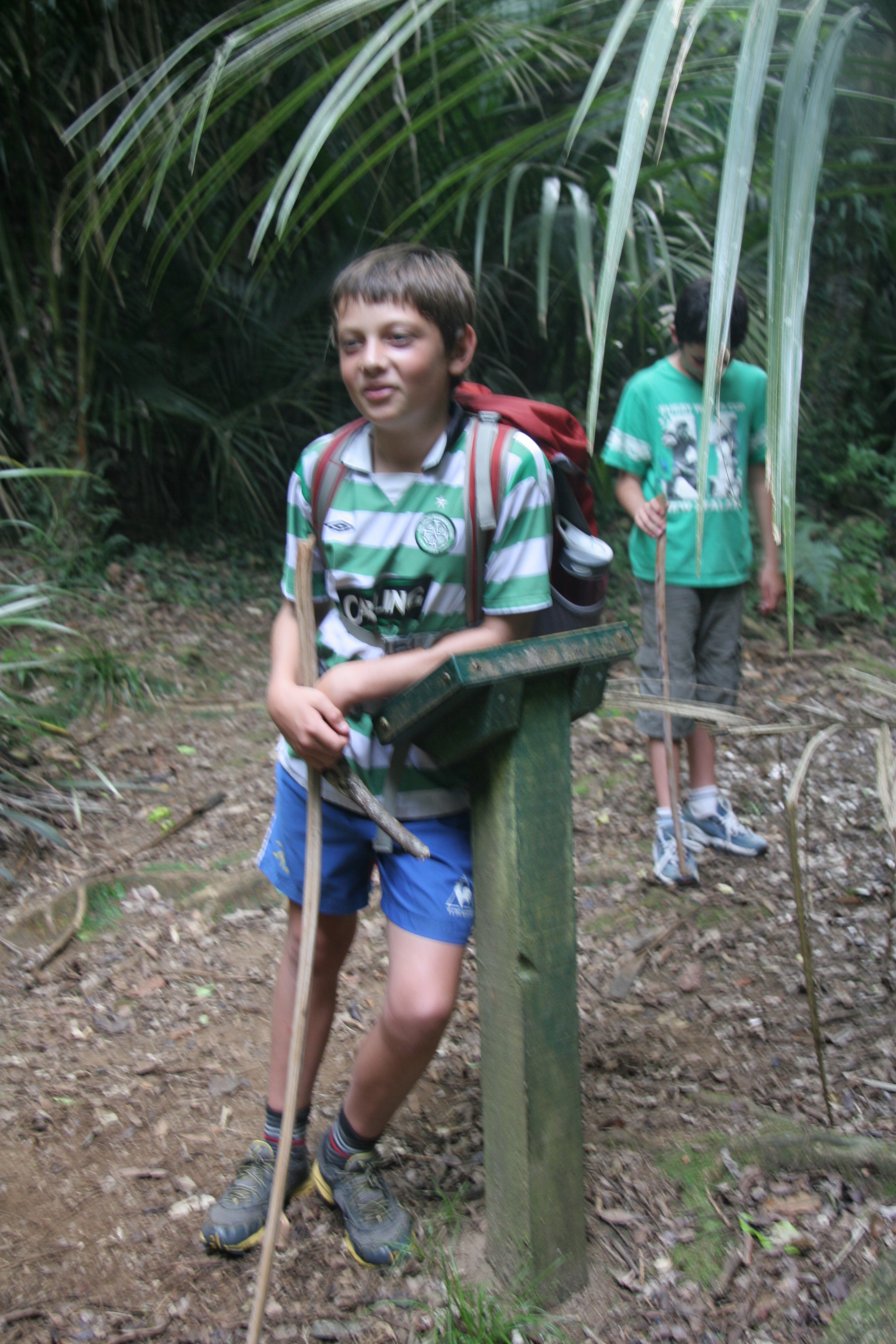 We caught up with the boys who seemed to be draped around a waymarker, had a brief photo stop and then they hurried Teresa on.  By this time we had been going for about an hour and a half; as Teresa moved onwards Gus revealed what he and Gav had been hiding.  The sign that read: “Dickey Flat: 3hrs”!

The way continued to be “undulating” but it really was beautiful and the variety of the trees and plants in the bush provided us with something to talk about and was a distraction.  Teresa was starting to be discouraged, her feet were sore, her legs were sore and she was tired.  But she kept going – she had no choice!  In her own words; “the only thing that is keeping me going is the fact that I have to!”

We finally reached the river where we anticipated that the “undulations” would cease as we followed the river along to the campsite.  We were wrong.  The path started to climb once more, and then it descended, and then it climbed…. Even when we reached the second river crossing the path continued to meander up and down the steep hillside that formed the bank of the river.  I guess that we should have realised that the Karangahake Gorge is not called a gorge because the river banks are flat! 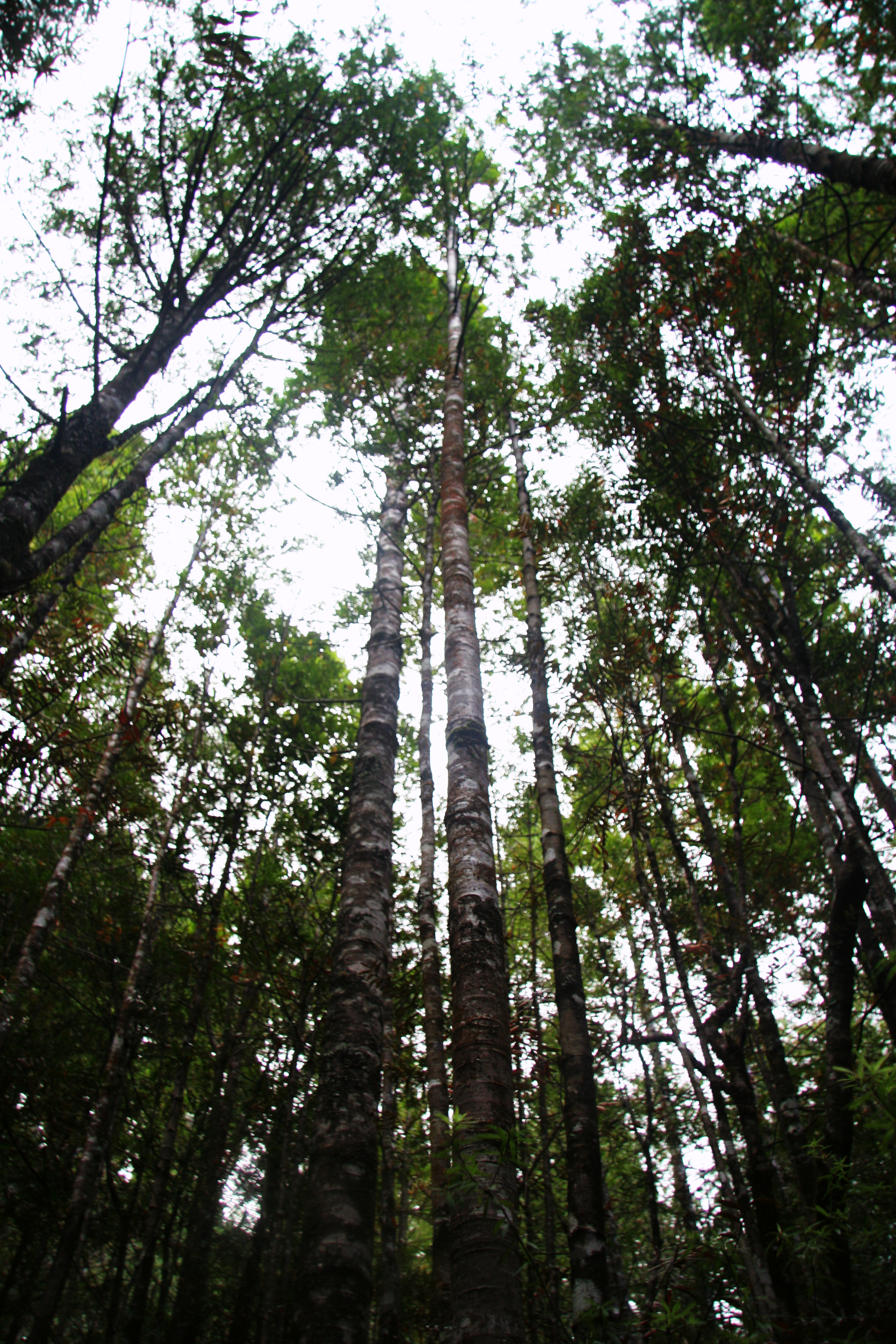 However, we still managed to delight in the scenery especially when we came to a ricker stand.  A ricker is a young kauri tree; these were densely packed, probably no more than a metre apart over an area as far as we could see.  Mostly spindly young trees with trunks about a couple of inches diameter, but interspersed with bigger ones and even the odd large tree.  Even the larger ones would only be considered “teenagers” in the world of Kauris where some of them are so big that five or six people cannot link hands around them.  The light was amazing – by this time it was close to 6 o’clock and dusk was falling – there was also a hint of mist and the air was damp so the light that filtered through the waning sun and the trees was almost translucent.

Crossing the river provided some light relief and a break from the tramping and it also allowed us to soothe our hot feet in the cooling waters.  There was still another 40 minutes or so of undulating pathway before we finally reached the campsite. The light was going fast and there was a sense of urgency to get back before dark. (although despite that Teresa and I did manage to spend about 15 minutes trying in vain to photograph the Kereru that perched happily in a tree, evading our journalistic lenses as he hopped around, munching on Miro berries!) We did get back; four and half hours after setting off on a two hour walk!  The boys and I jumped straight in the river to wash away the sweat and relieve our tired muscles but not before putting a glass of wine into Teresa’s hand and a bowl of water to soothe her feet!

Great work Teresa G – and you didn’t get to push me down the hill! 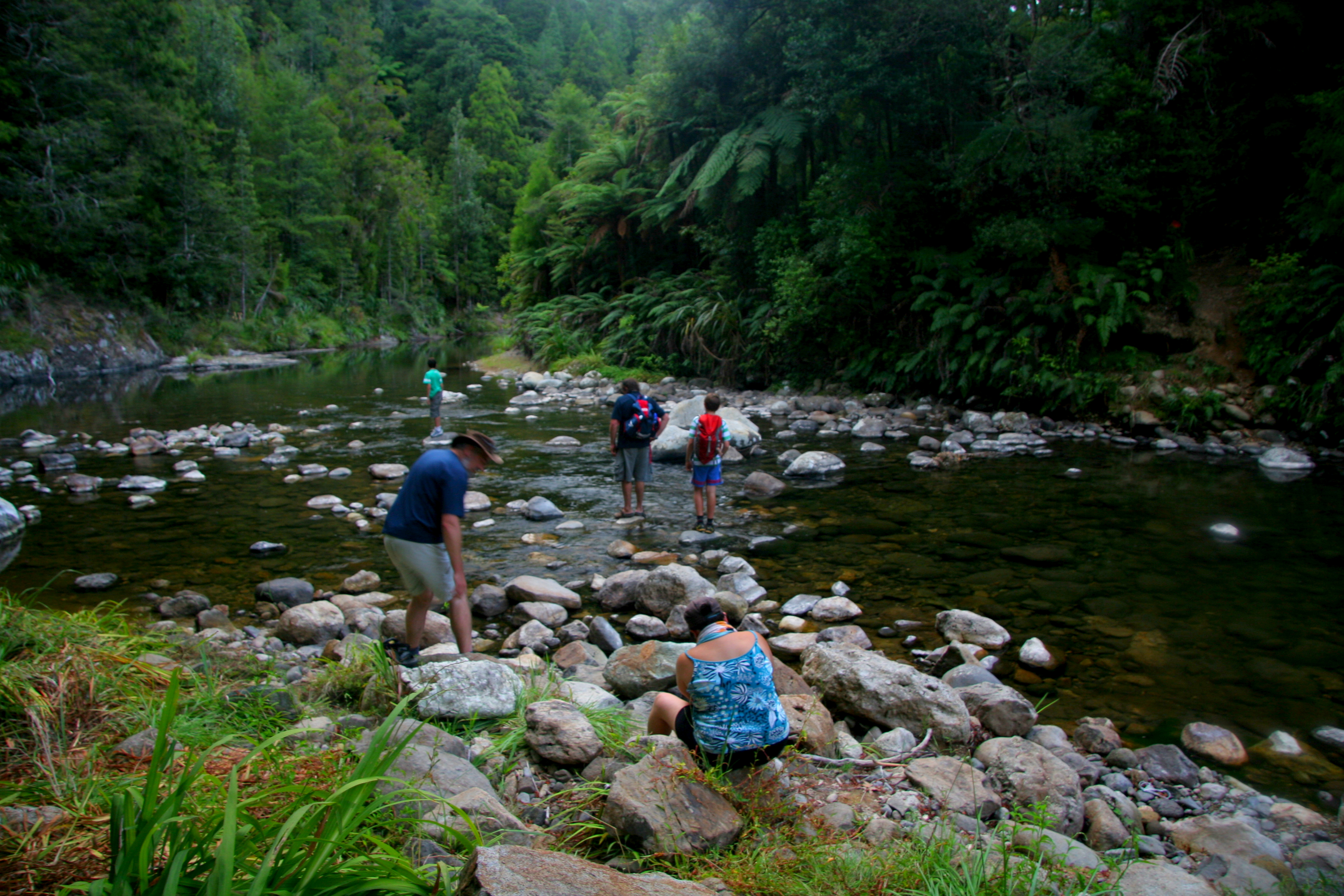