Gale force winds and rain were forecast for the rest of our time on Stewart Island. But we had cagoules and merinos and we grew up in the north of England and Scotland so we are no strangers to adverse weather conditions. There is some mileage in the notion that when you are expecting the worst anything else feels like a bonus.  So a day spent dodging showers, with the wind in our hair and plenty of sunshine in between times made us feel very fortunate! After our long day on Ulva Island we had a lazy start to Sunday.  The conservatory was a beautiful place to sit and read, it absorbed the sun and afforded us a stunning view over Ringaringa Bay.  But after an hour or so the heat became unbearable and Chris and I decided that it was time to make the most of the sunshine and headed out to explore leaving Nigel and Aonghas in bed. 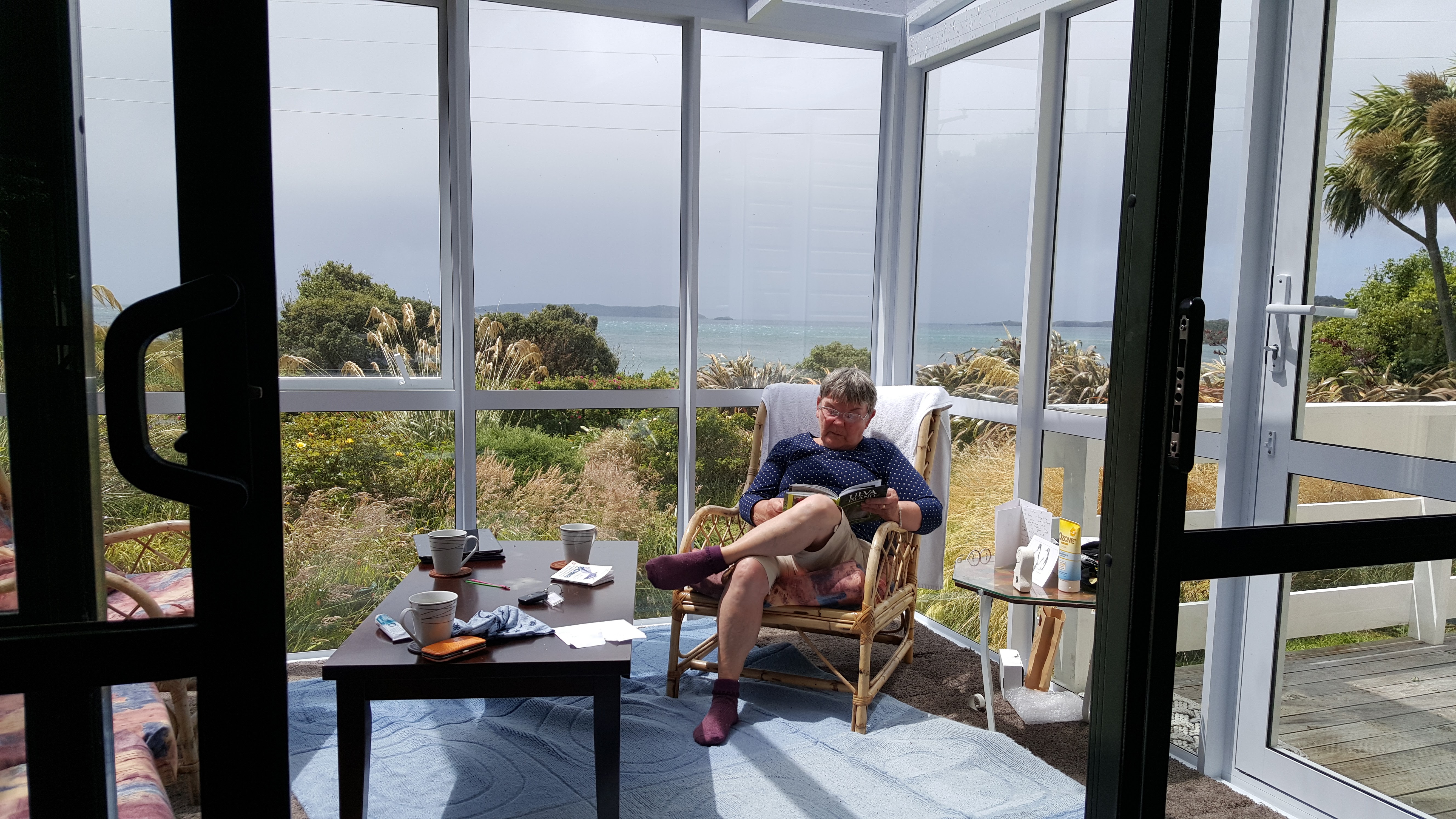 The cottage we were renting came with a little 4wd which was a real boon. According to the DOC information it was a 40 minute walk from Ringaringa into Oban Township – what a delightful name – but it was quite hilly and by car was just 5 minutes which meant we could cover more ground and stay dry! 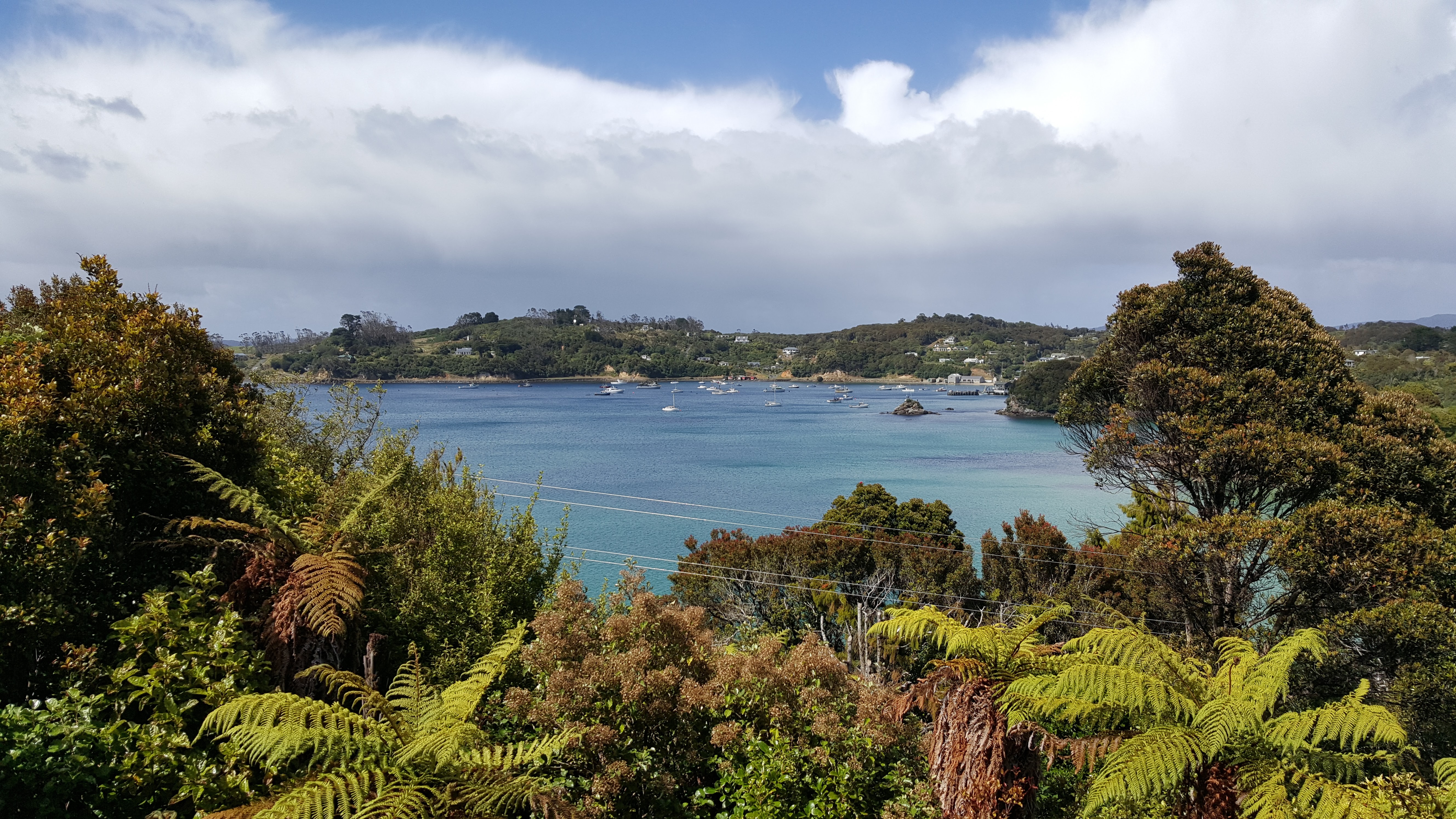 Our destination was Moturau Moana a public garden gifted to the NZ Government by Miss Noeline Baker in 1940.  It houses a collection of NZ native plants and we spent half an hour or so wandering around.  The rain held off and we had a great view across to Oban.  We both agreed that although it was a pleasant spot, had we made the effort to walk all the way from Oban we would have been a little disappointed.

Back into Oban, there was great tumult. At first we thought the new arrivals from the recently docked ferry were just taking photos but as we drove past we saw the object of the excitement – a sealion casually phalumping up the street.  He was a real celebrity, stalked by townsfolk and visitors alike as he made his way up the road.  A sharp, sudden downpour sent everyone scurrying for shelter and having snapped our shots of him we went home. 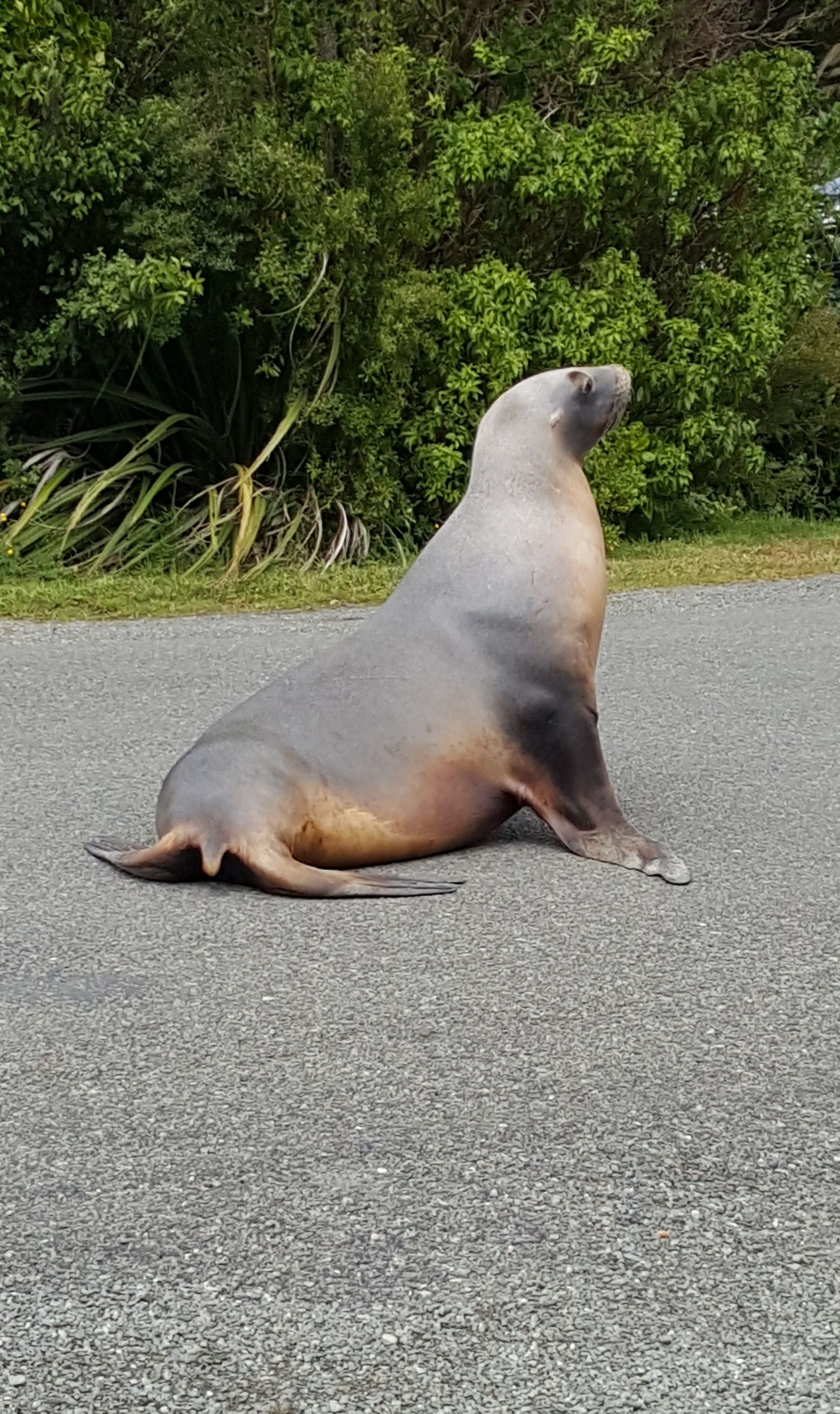 A quick lunch and we were off again to walk along to Horseshoe Point. The path leads unpromisingly to start with through the refuse station but soon onto a dry, dusty track lined with old, twisted pine trees which cracked and groaned in the wind. A rope swing strung from high up in one of them entertained Aonghas for a short while. Then the pines gave way to shorter shrubs and bracken and the track narrowed and meandered up and down.  Out of the trees we were less sheltered from the wind but the sun was out and it was not too cold.  We didn’t see or hear a lot of birds but we were graced with the presence of kereru which turned up just as the sun did – just look at the iridescence of its beautiful green head and shoulders! 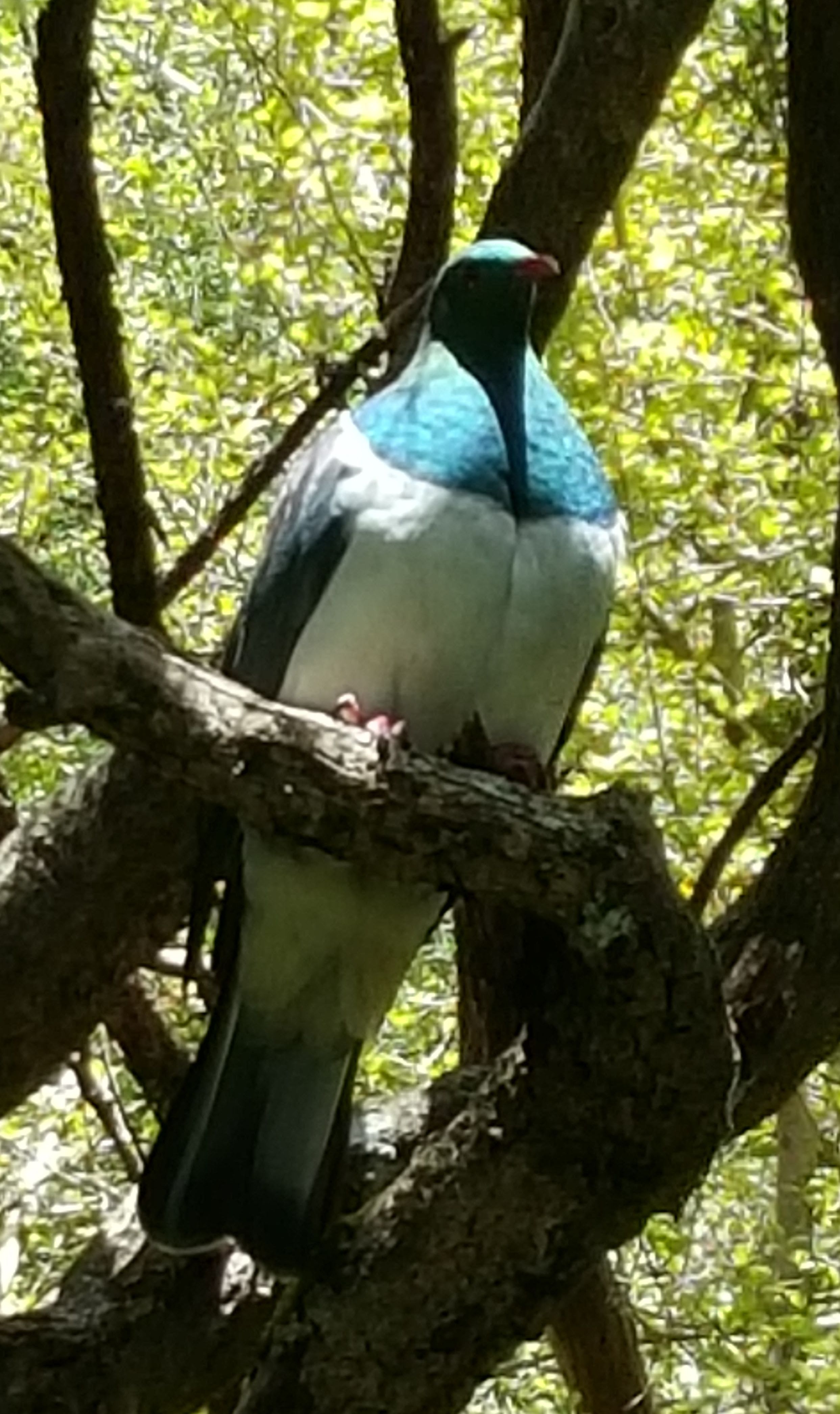 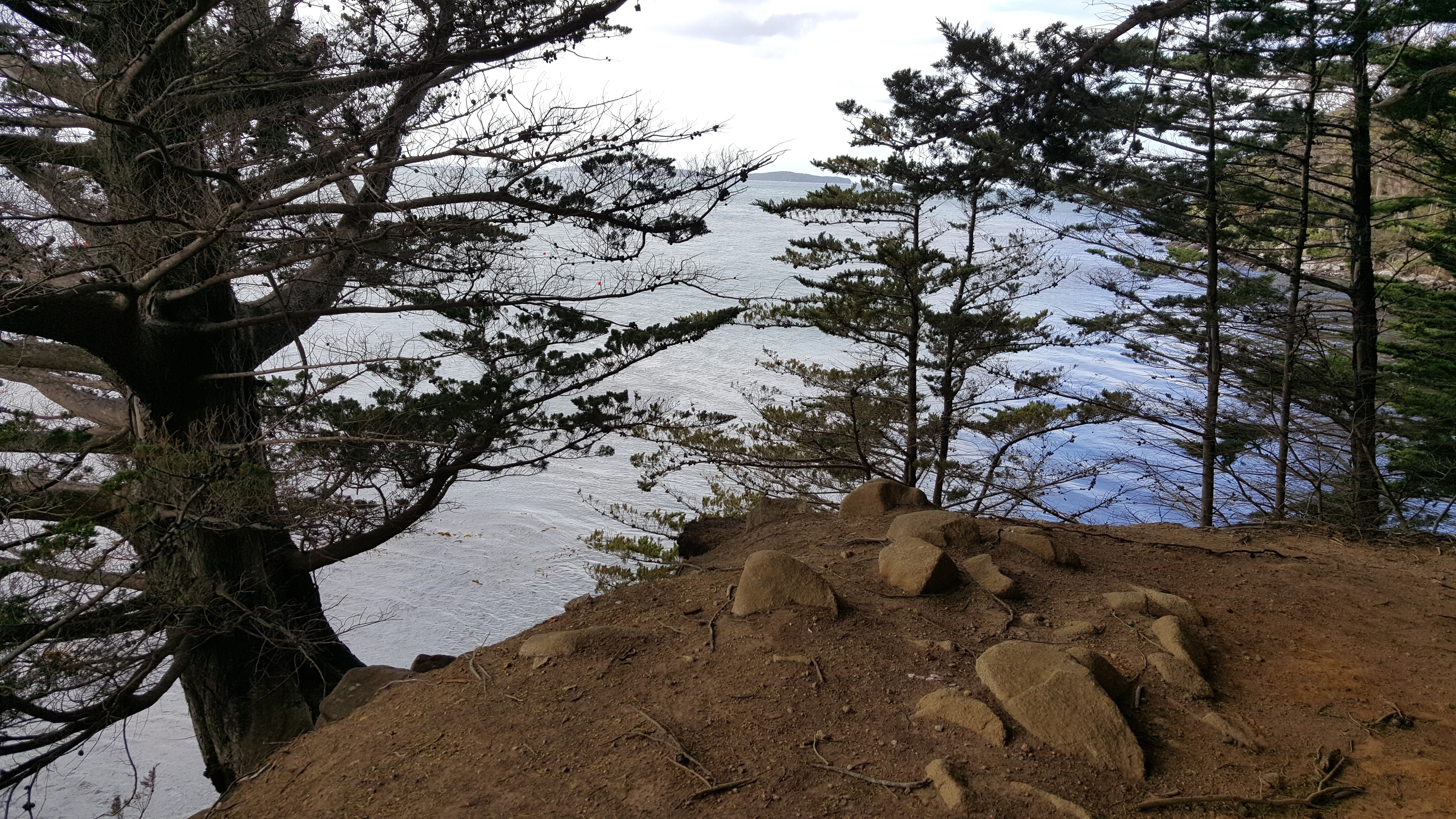 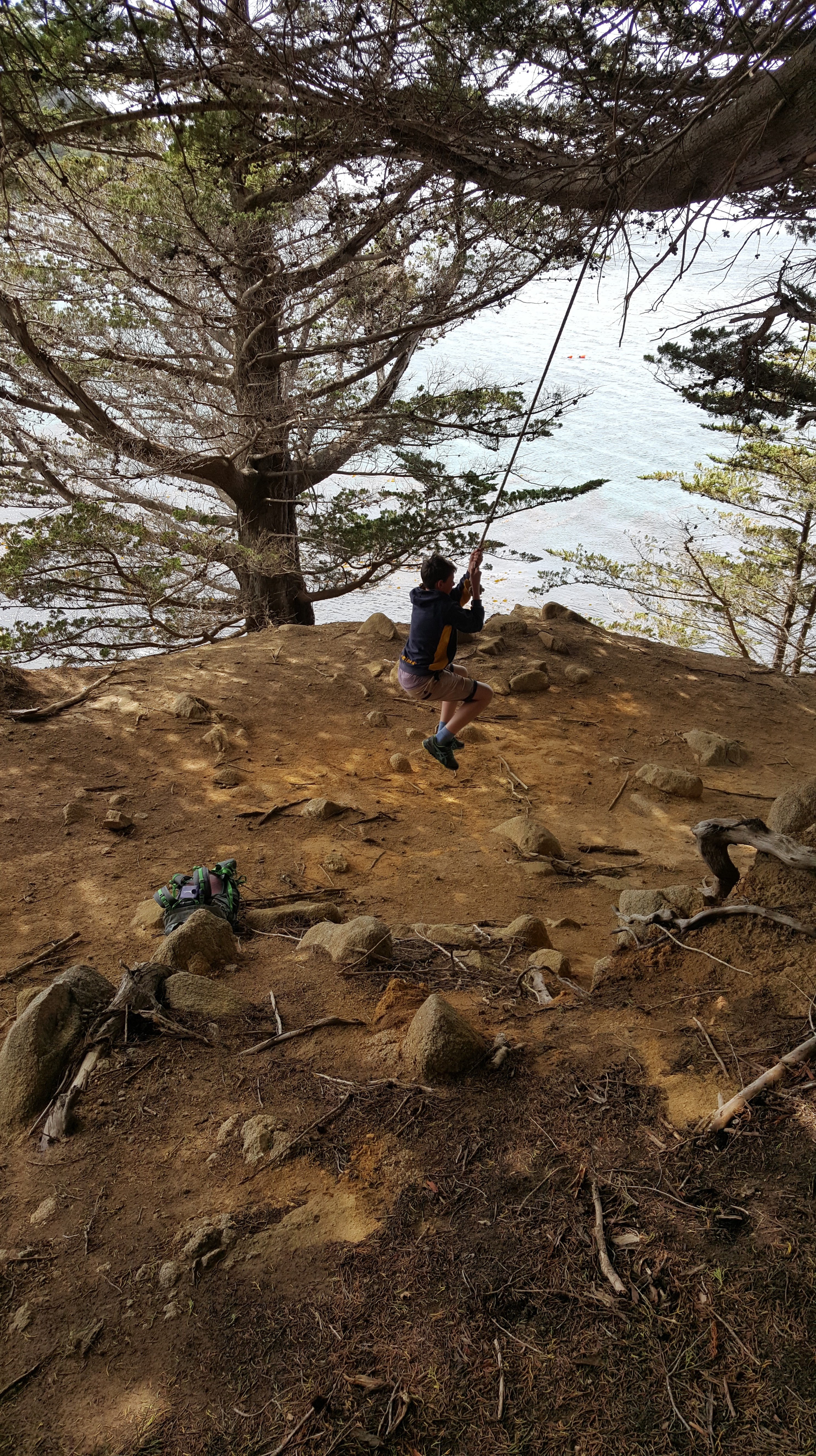 The end of the peninsula is marked by an old, metal trig point and another spectacular view out across azure blue sea to more of the islands that scatter the Stewart Island coastline.  It seemed a perfect place to continue a tradition of mine to do a handstand on trig points around the world. So I did!

“Stewart Island anchors more than Maui’s canoe. It anchors in its rocks, rivers, and rugged shores and in its garnishment of plants and animals, the hope of generations unborn that places like this will always exist.”      Neville Peat, 1992

“Te Punga o Te Waka a Maui, the original Maori name of Stewart Island, positions it firmly at the heart of Maori mythology. Translated as “The Anchor Stone of Maui’s Canoe“, it refers to the part played by this Island in the legend of Maui and his crew, who from their canoe (the South Island) caught and raised the great fish, (the North Island).  The more commonly known and used name however is Rakiura. Translated as “The great and deep blushing of Te Rakitamau” an early Maori Chief, seen today as the glowing sunrises, sunsets and the Aurora Australis or Southern Lights.” We weren’t fortunate enough to see the Aurora but we did see the anchor chain that connects Rakiura to the mainland.  It is a sculpture designed by local artist Russell Beck and is located at Lee Bay at the start of the Rakiura track, a 32km three day tramping track. Controversial when first installed it now appears to have acquired an iconic status. Its large, rusty red chain links are quite impressive and certainly provide a great photo opportunity for the young and young at heart! 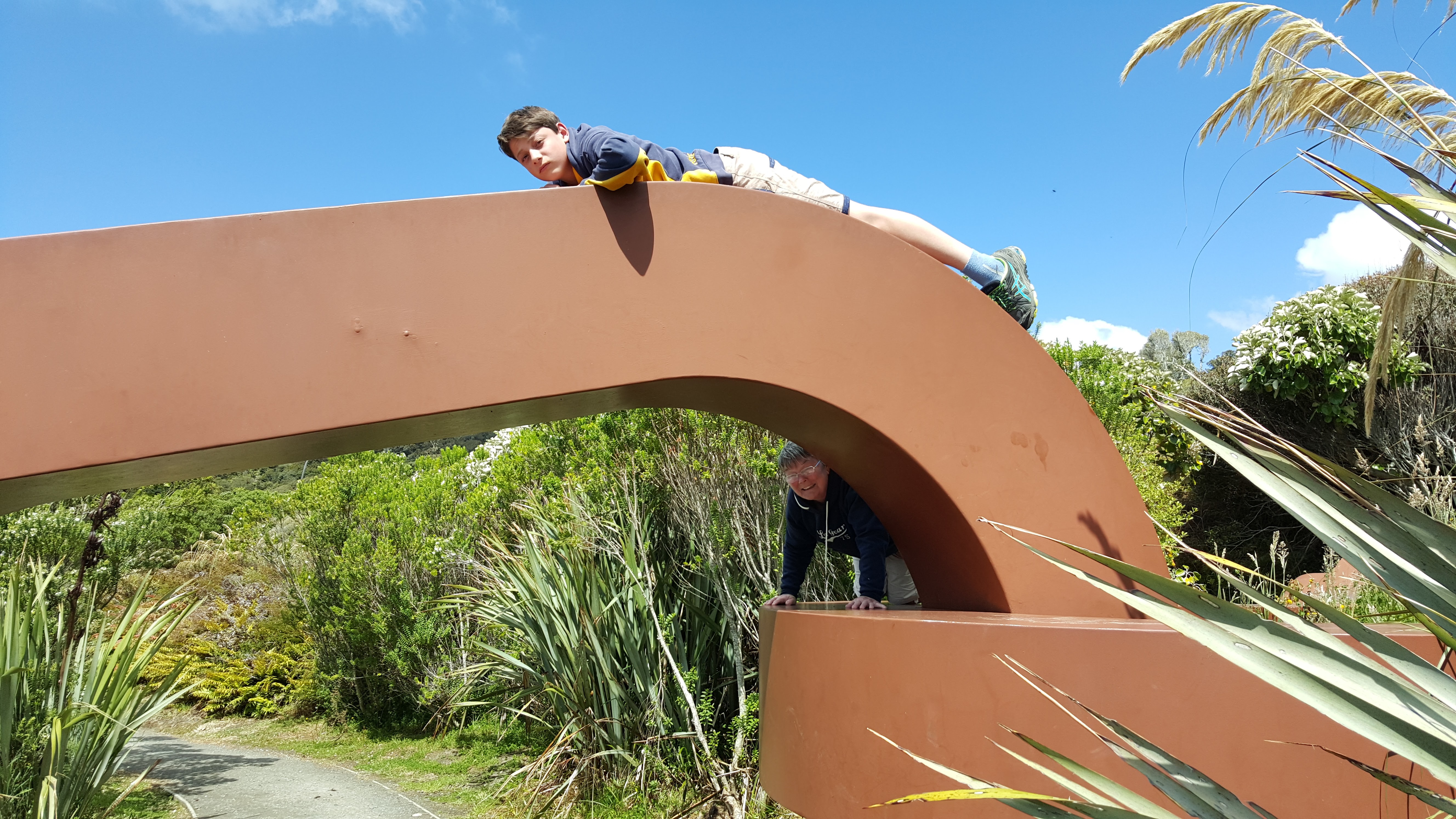 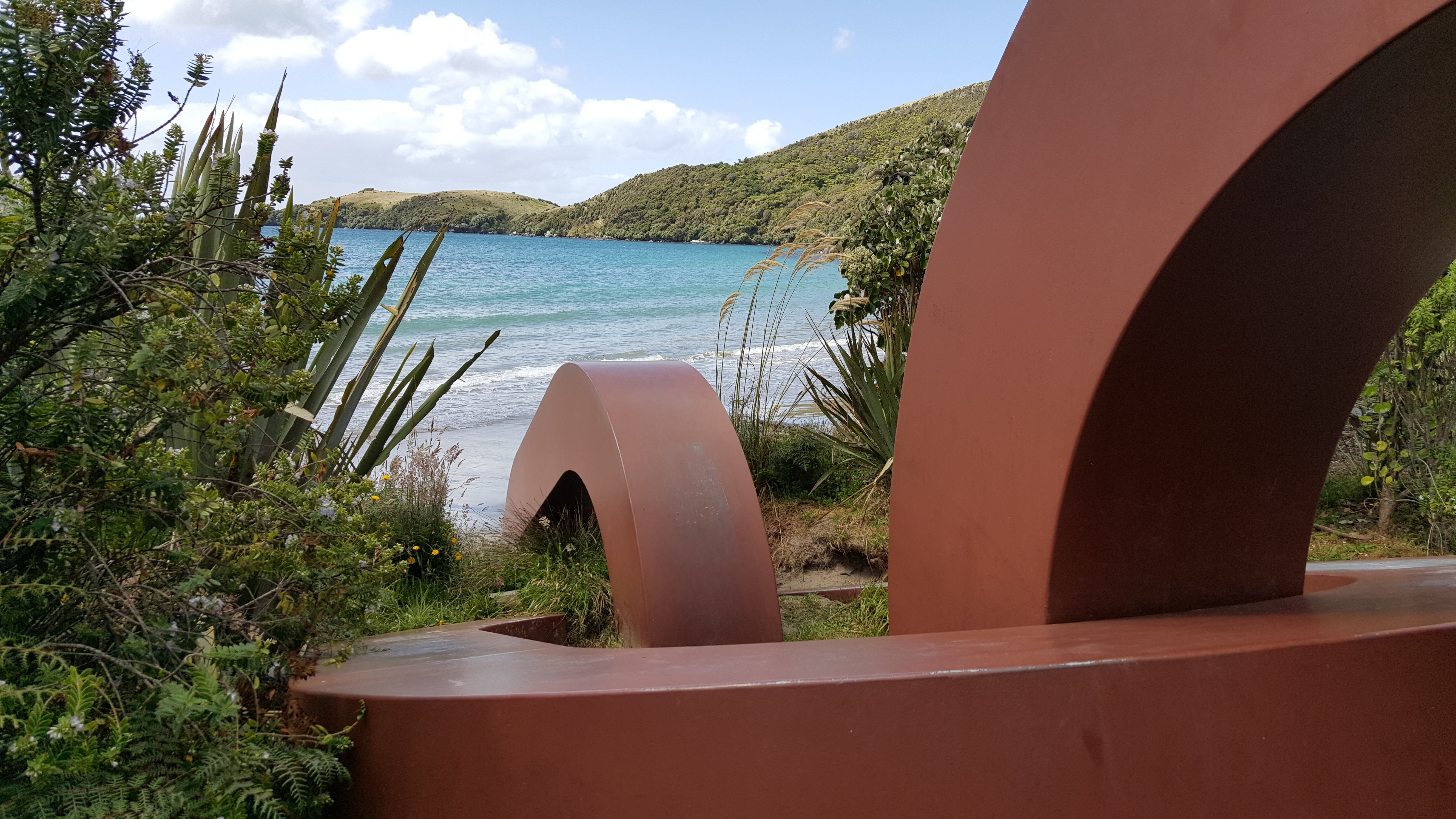 There is not a lot in Oban but it boasts three restaurants for the many tourists that visit.  “The French Crepery” (I have to cringe at the incorrect spelling, sorry!) was very high on Aonghas’ list of places to go so we decided to have an early tea (it closed at 5pm).  One bonus was the range of vegetarian options for Nigel and the savoury crepes were very good and came with a wholesome, comprehensive salad not just a limp lettuce leaf and a few  bits of chopped tomatoes and cucumber.  Aonghas, of course, went for a sweet pancake too but was disappointed when his favourite traditional lemon and sugar pancake came with icing sugar and not castor sugar. Nevertheless, he made a valiant effort but had to be helped to finish the huge dollop of ice-cream that came with it…! 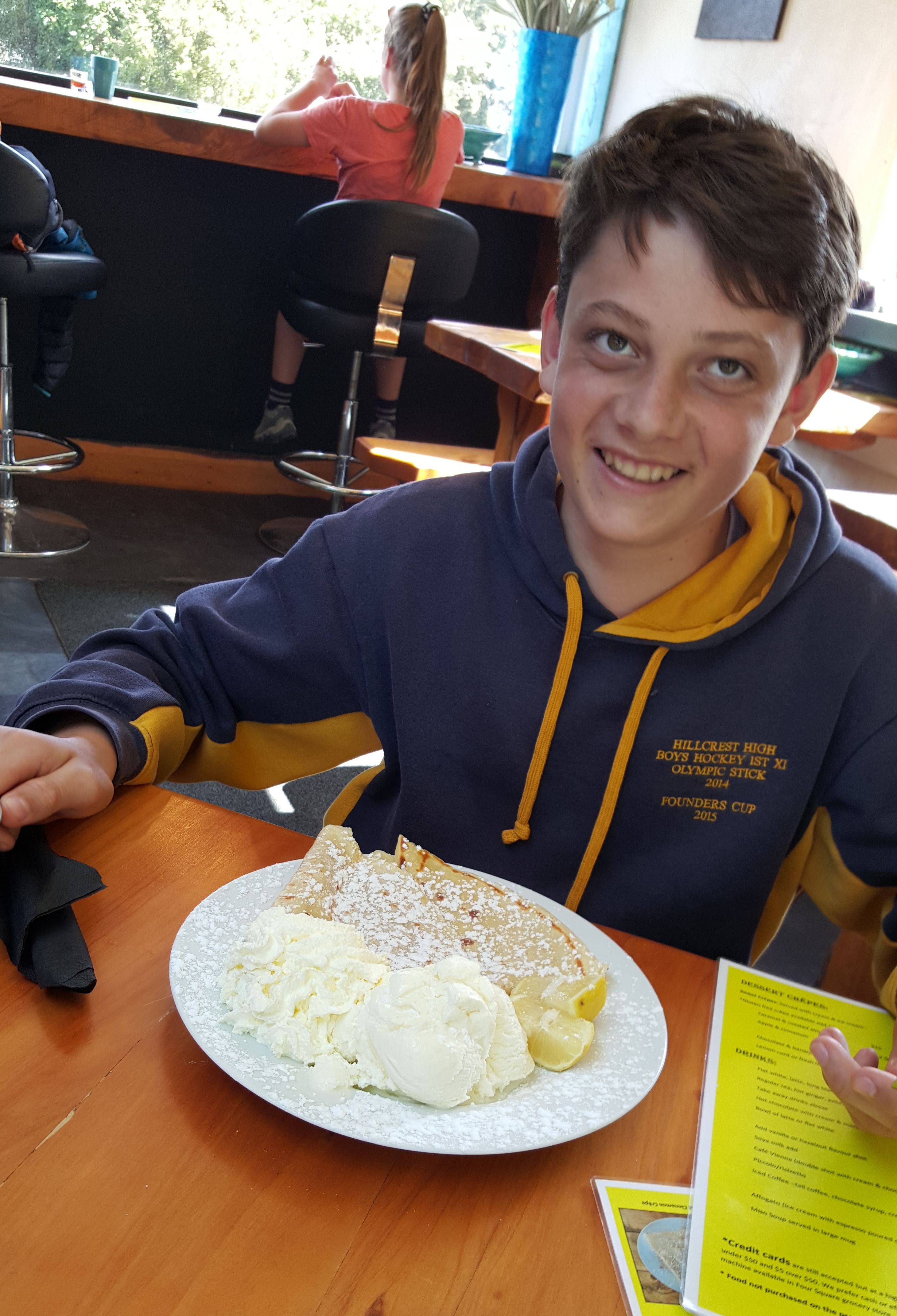 All good, because he worked off the sugar keeping warm whilst playing Nigel at giant chess in the freezing cold wind that whipped the sea front. 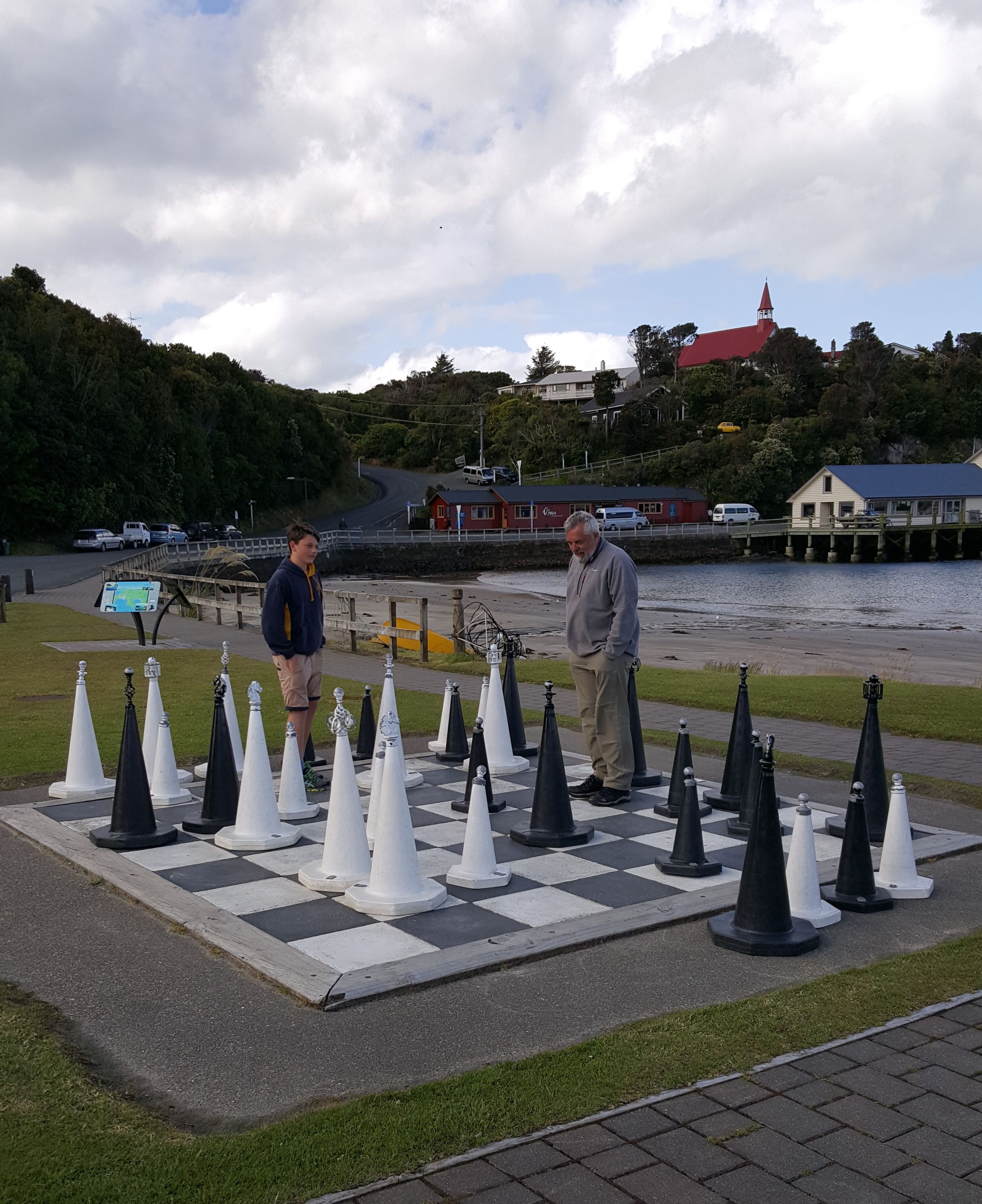 Back home to our little piece of paradise for a game of cards – we taught Chris how to play “Hearts” – before an evening walk down to the beach to go penguin spotting. 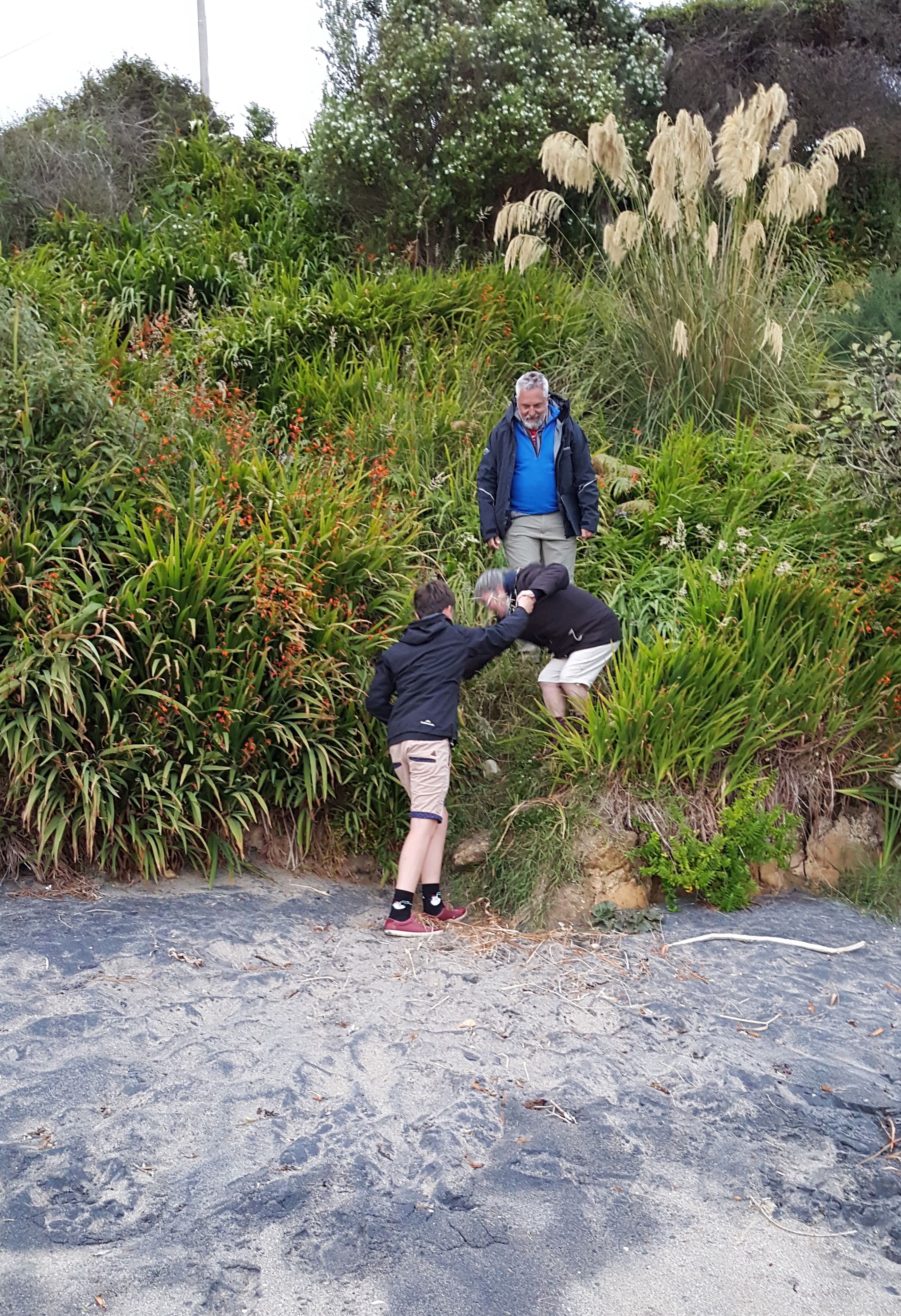 On arrival we saw some tracks which we thought might be penguin tracks leading from the sea across the sand to the bush line.  Not sure how many pairs might nest in the same vicinity we thought it was worth hanging out. It was a beautiful evening down there, the sea was calm and the light breeze wasn’t too cold and we were well rugged up.

We kept vigil for an hour and a half and, although we saw a penguin swimming in the sea, it dived beneath the waves and must have headed to a different beach as we never saw it resurface. Reluctantly, we headed back up the steep, narrow but short path in semi-darkness to our home for the week to round a great day off with a wee dram. 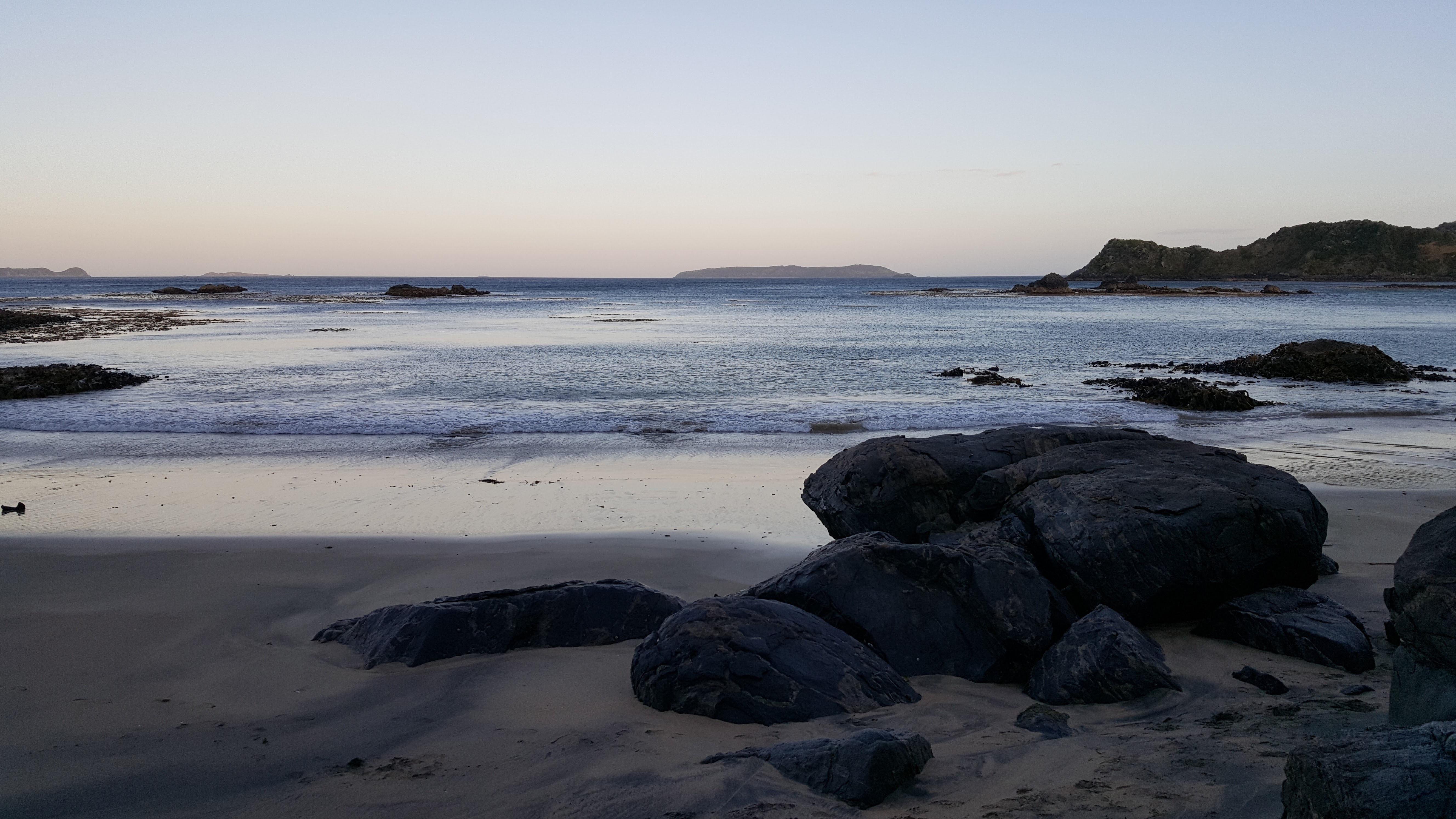