So we’re settled into our new house, started to get to grips with the garden – even bought some plants, a shredder to mulch the prunings and the falling autumn leaves.  We have plans to create a veggie plot and swap some of the decorative perennials for fruit trees.  Aonghas has already planted some carrots and marigolds ( or marlegods as he calls them!) in the boxes outside his window.  The early Camellias are starting to flower and we have a carpet of deep pink petals in our garden.  Roses are still blooming but the trees are wearing their autumnal colours and looking glorious in rich shades of yellow

through orange to red.

Well, what have we been up to..?  Boys have finished summer sports and are training for their chosen winter sports.  Lachlan is continuing with rugby, but has taken up squash and, as he is in Year 10 he is allowed to use the weights room at school.  Aonghas has decided to try hockey this year and is enjoying that – he even scored a goal last week!  Lachlan is also running regularly and still cycling.  Next weekend he is heading to Rotorua to take part in the Moon Ride – a 12 hour mountain biking marathon.  He is riding as part of a team and they will take it in turns to do the 15km circuits from 10am

to 10pm.  We were down there a couple of weekends ago and all had a go on the tracks. The Redwoods is a great forest with masses of mountain bike tracks of all levels.  Aonghas coped really well with them and ventured down the Dipper which even I braved, though Nigel decided that caution was the better part of valour and chickened out!  (we won’t hold it against him!)

We were down in Rotorua as I was taking part in a Duathlon, we decided to make a weekend of it as it was the last weekend of the Easter holidays, and our friends Liz and Chaz were also there with their boys, Jamie and Josh.  Liz was competing in the Duathlon too, as well as a couple more of our friends.  We stayed in the Thermal Holiday park – the same one we stayed in when we 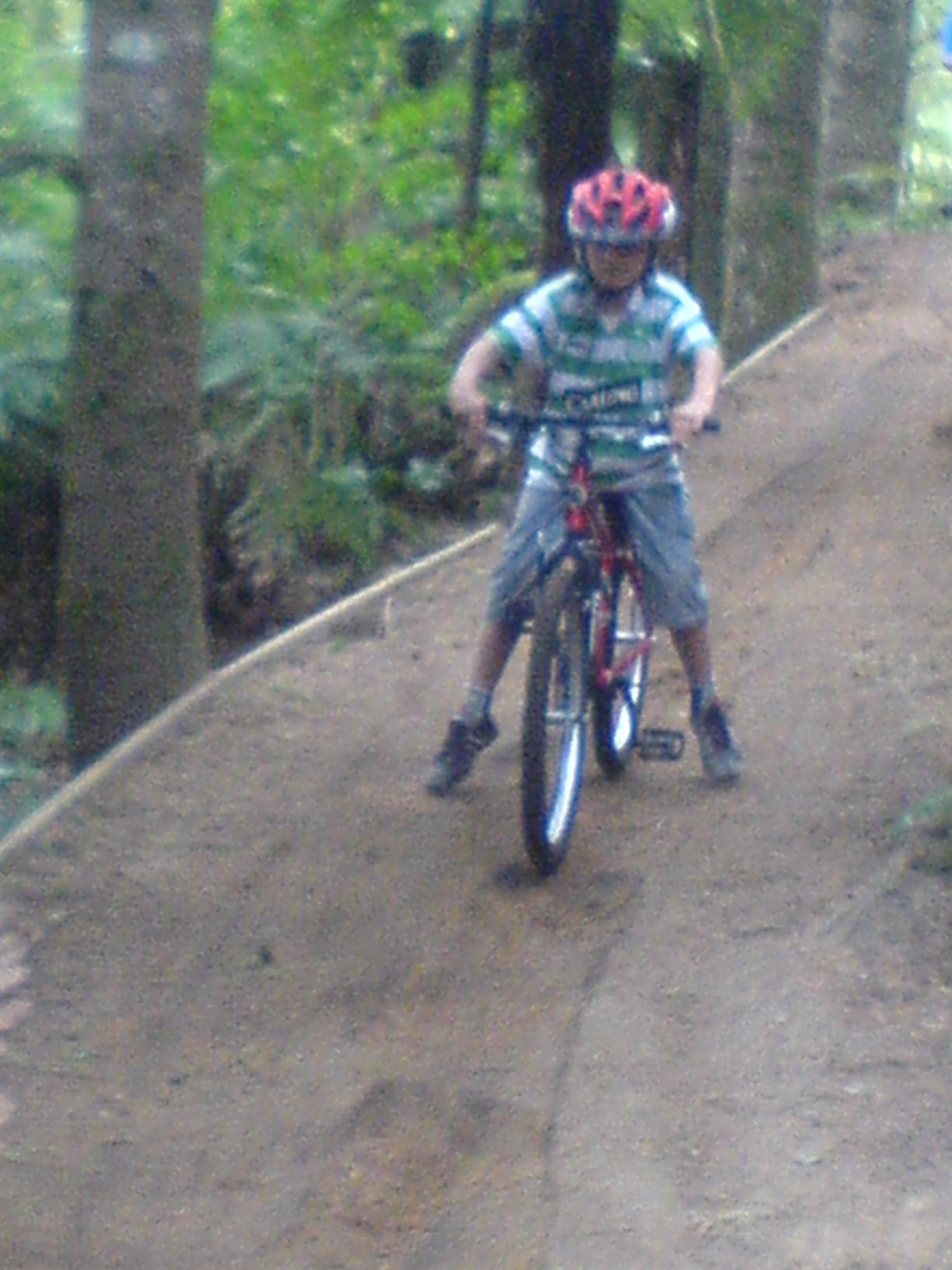 were here on holiday in 2005. We rented a self contained unit which, in estate agent speak, made good use of space – compact and bijou!  The advantage of the park are the hot pools, plenty of running around space for energetic boys, a games room as well as a television! After a couple of weeks of glorious weather we had a weekend of rain and wind, so the going was soft and muddy!  We set off with the wind and rain lashing our faces, but once on the way and into the forest, we soon warmed up.  The pressure was off as far as times go because of the weather conditions so we just relaxed and went with the flow.  Obviously a good move because I ended up with a time 5 minutes faster than the last duathlon I did and a top 10 finish!  We hung around in the cold and wet for the spot prizes because you never know ……. that $2000 bike might just have your name on it!  Sadly it wasn’t to be..maybe next time!  But, boy were those hot pools good when we got back to the holiday park!  A couple of hours later and nicely coddled we emerged to head back home!

We stopped off at what has become a bit of a regular, favourite spot for us – the Fat Dog cafe.  Huge portions of scrummy food and plenty of veggie options for Nigel.  Heaps of sald with home made burgers as well as BLATs, fries, wedges ….mmm,  my mouth is watering just thinking of it!