So, Nigel and I have escaped for a real holiday. Overseas, together, just the two of us. I feel a song coming on! No, sorry, I won’t even go there!

Anyway, we’ve run away to paradise. Tahiti. I might write some other blogs to tell you about what we’ve been up to here, and our photos will all be on Flickr as usual.  But this evening’s blog is just to recount the adventure we had today.

Our plan for our time away is to be as active as possible. Two reasons – one, we just don’t like sitting around sort of holidays and two, we’re in training. I’m running the Abel Tasman trail event in two weeks time so just need to keep my legs moving and, in January we are both doing the Old Ghost Road.

We explored what guided walks were on offer so that we could learn about the local flora and fauna and history. We couldn’t find any that went on ‘real’ walks although we were given the number of a local ‘sage’ who we tried to contact but were unsuccessful.  Undaunted, we decided to go it alone.

Mark, our host at our accommodation, Mark’s Place, told us that a well visited view point called Les Trois Cocotiers (three coconut trees) was accessible by a less well-travelled route from just a few kms around the road from us at Vaianae. It is also possible from Les Trois Cocotiers to continue on to Le Belvedère which is where most people walk from.  Our plan was to try to get across to Le Belvedère and then return by the same route.

Mark dropped us off at the start of the metalled road just a few metres further on from the shop at Vaianae. He gave us some basic instructions as a starting point but told us to call in at a place called “La Maison de la Nature” and introduce ourselves and say that Mark had sent us. They would give is more detailed information about the route from there.

On the way we chatted to a local who confirmed what Mark had said; it would take us about an hour and a half to reach the col and then a further 90 mins to get to Le Belvedère. However,  unlike Mark he said the route was quite straightforward and well way-marked.

The first 30 minutes climbed gently up a metalled road past houses which varied from being simple dwellings, with gardens full of fruit trees, chooks and dogs to more lavish houses with well-manicured gardens. There are dogs everywhere here.  Even though they bark they tend to stay put even when there is no fence but I still find them alarming. 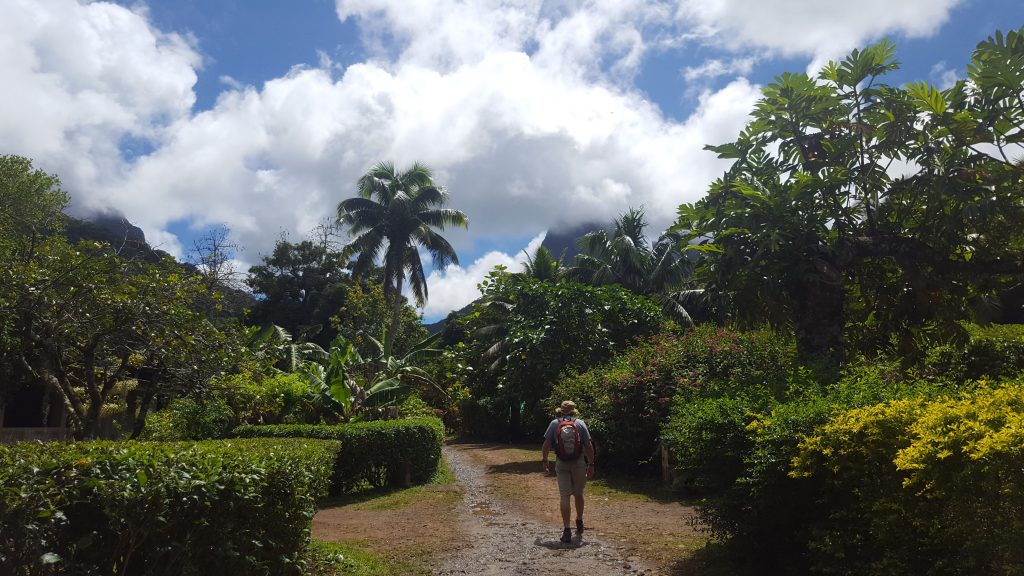 Our first challenge came when the road split. One way went over a bridge and then turned sharp left up the hill. At the bend was a white house. The other road turned left up the hill and it seemed to be the continuation of the road we had been following so we took it.  About 100m higher up there was this sign; 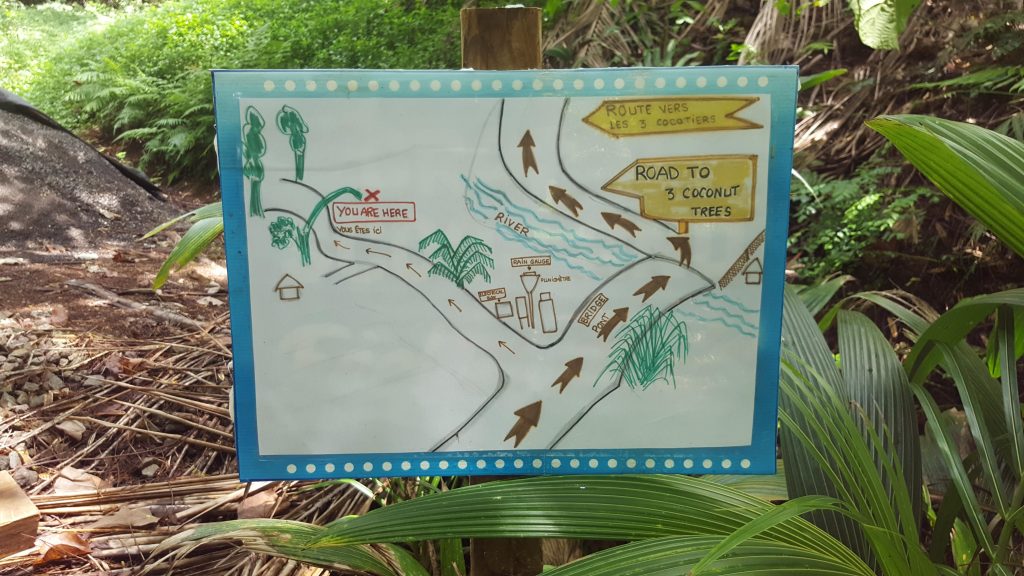 It might have been more useful to put it at the junction!  So back down we went,  over the bridge and up the rougher road.  Ten minutes or so further on we came to a building.  By this time the road was more overgrown,  the trees much thicker. There was a sign but it only had a phone number on it.  It looked like the whole place was being renovated.  To the right we could see a large shelter with a sort of climbing wall.  We climbed the wooden stairs which kindly asked us to walk ‘doucement’ to a balcony where a pair of jandals sat on a mat. We called bonjour,  but got no answer and didn’t feel that we should walk in so we continued up the track.  However, it went past an upper entrance to the building where a man was working a saw of some description.  We introduced ourselves, said we were staying at Mark’s Place and that he had said to call in.

His instructions were as follows.  Continue up the path,  at the windmill turn right,  continue on until you get to a stream. There used to be a bridge but it’s broken so just follow the track across the stream then turn left.  Keep going to the col. At the col, head left for about 10 minutes to the viewpoint where you can see north and south.   It should take about 45 minutes. To carry on to Le Belvedère, go down at the col for about 20 minutes or so then the path traverses, meandering up and down through beautiful terrain.  Roughly an hour to an hour and a half. ..

Off we went. No sign of a windmill (We saw it on the way down) but a junction of sorts – the single track path through knee high grass was clearer to the right.  Then we spotted a sign post hidden under the tree.  Confirmation. 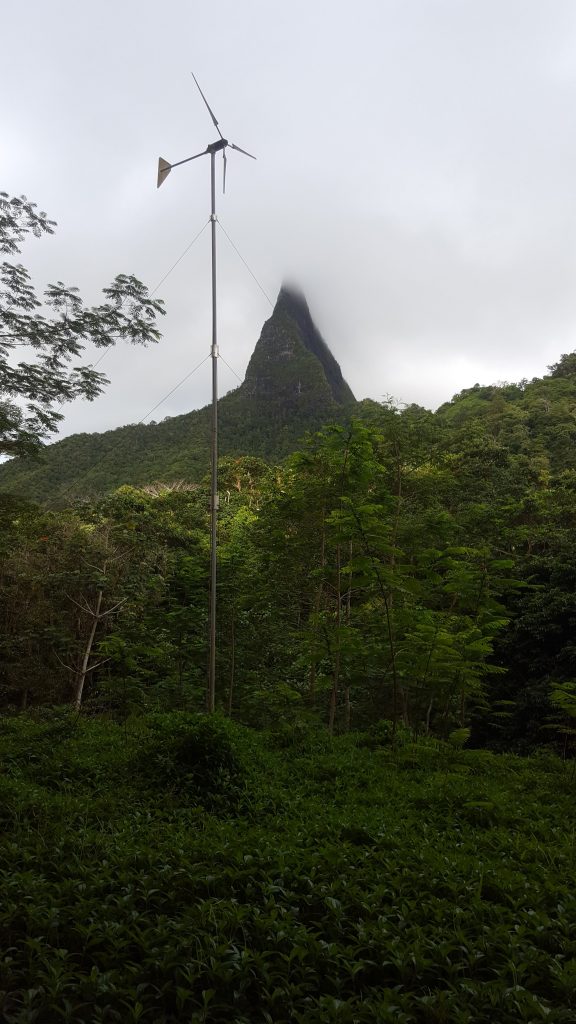 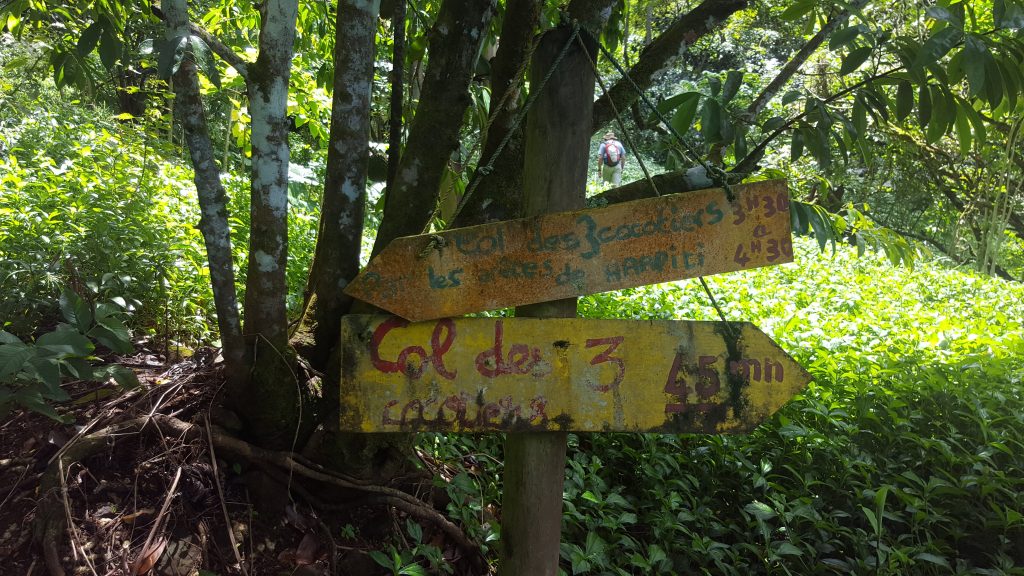 Reminders that La Maison de la Nature used to be, and may well be again, a ‘Colonie de Vacances’ for children lay half buried in the grass and vegetation.  Rope swings, balance beams, stepping stones and other adventure challenges. We came to a waterfall at a stream with a broken crossing but not what we would call a bridge and there was no obvious way on.  From the way the description had been given, I didn’t think we should have got to the stream crossing yet anyway.  So we looked for another way on and found a grassy track heading up to the left. It wasn’t well-defined but it was definitely a track and there were more kids’ adventure type obstacles half buried.  Convinced we were on the right track we continued.  Until a fallen tree seemed to block the way.  Maybe not,  we thought, and went back down looking for another option.  But not finding anything we went back up again.  The fallen tree negotiated we refound the path. A little further on we started to descend gently on a grassy slope, back to a single track in knee high grass.  A junction gave us a choice of continuing down or turning sharp right.  A rope looped between wooden posts helped to convince us that this was the right way.

Now we came to another junction.  A wide grassy shelf headed up gently to the right, to the left, a narrower steeper path.  I went up it to recce. It seemed to continue on as a well defined path, but we weren’t sure it was heading in the right direction.  We tried the other way. After 20m or so, there was another wooden activity challenge but then the path seemed to head back down in a loop. 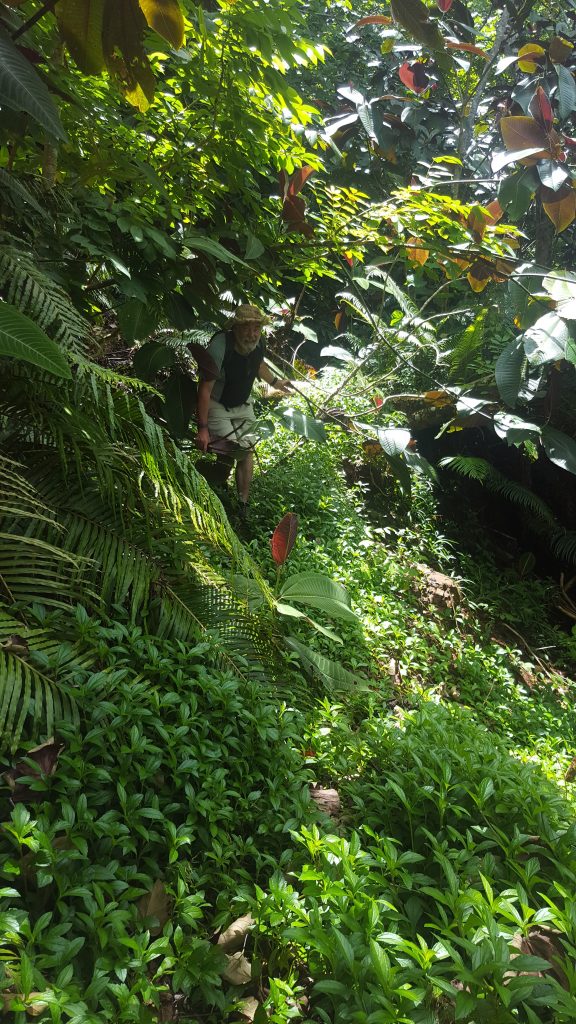 We decided to go left.  On we climbed.  The path was rugged, steep at times, very rooty with quite a lot of fallen vegetation and we had to keep our eyes peeled to stay on track but it was clearly a path. All the way up were had enjoyed the changing vegetation, the lush tropical plants – the sort that I once had as house plants in my bedroom as a teenager in the 70s. The colours are beautiful,  bright red hibiscus in the trees around us and also splashes of colour on the path where the blooms have fallen. 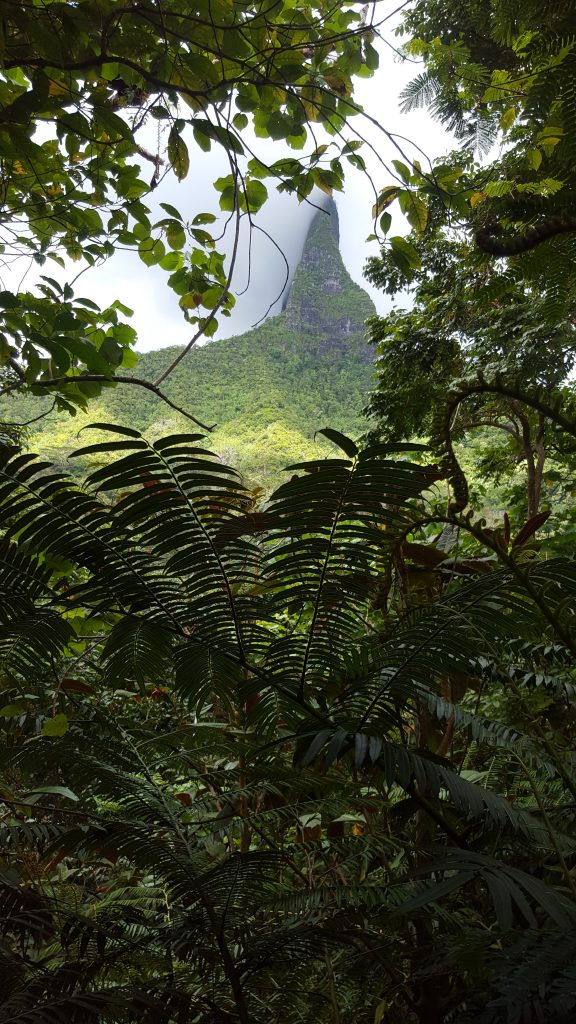 The path started to climb more steeply and through the trees we glimpsed the impressive tall rocky peaks, half shrouded in mist. We were still waiting for the path to turn right and eventually it did. After having spent the last half an hour on a ridge we descended into a bowl of trees. Quite different, dark but not foreboding.  We were still searching for the way on when we suddenly noticed the trees.  Tall, incredible buttress roots, gnarly and twisted into the most surreal shapes.  We marvelled at them,  realised these were the chestnut trees or Mapes that we had read about, and thought about sitting down and having lunch. 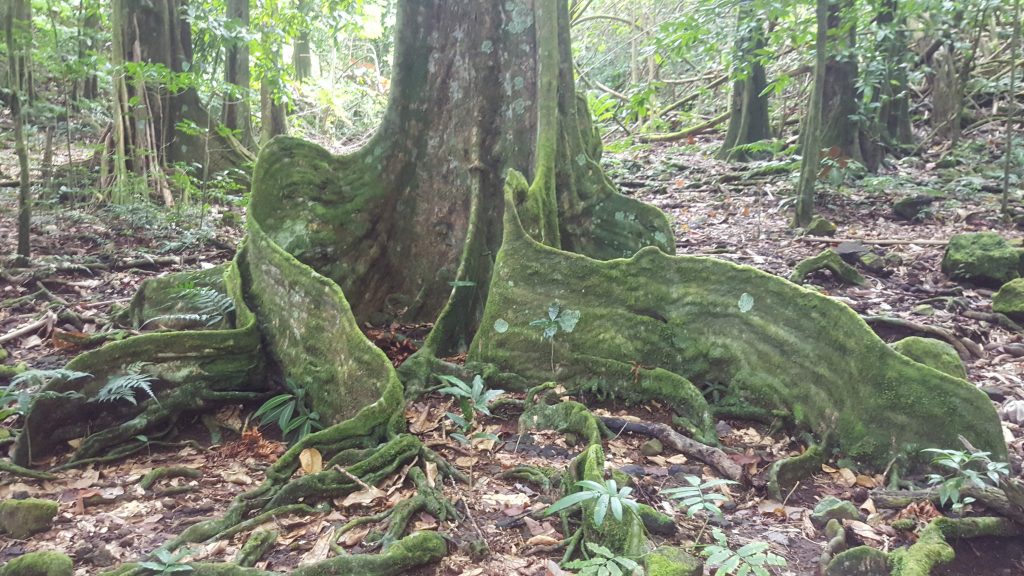 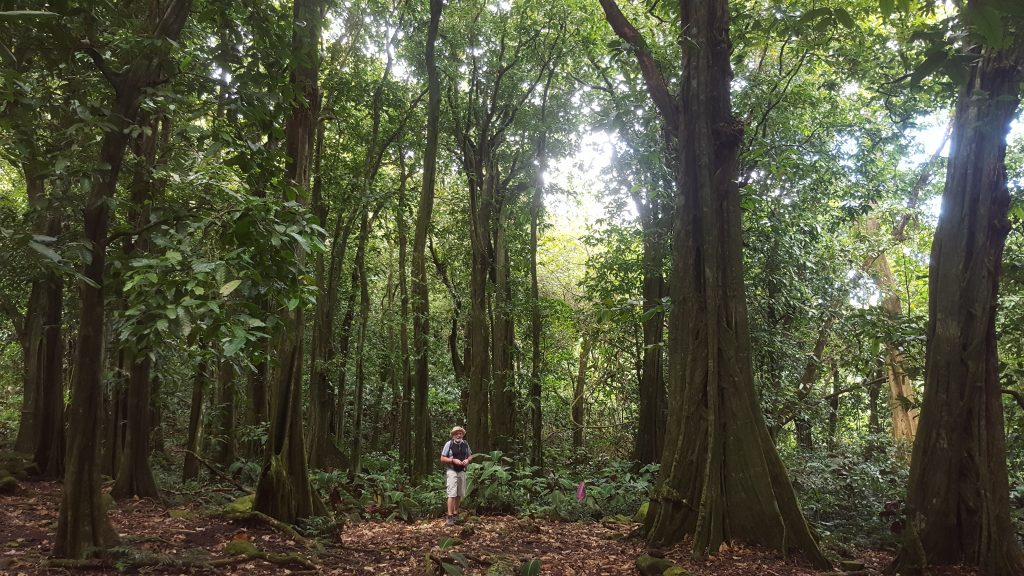 We decided we couldn’t have far to go by everyone’s timings so thought we would press on.  Despite thinking that we needed to stay right, we weren’t happy that right took us down hill.  So we went left,  uphill thinking it would swing back round.  After bushwhacking our way through more fallen trees and rotting vegetation up an indistinct but definite path we came to a stream and small waterfall which we crossed.  We were clearly climbing higher,  the canopy was lighter,  we could see the sky.  Surely we would hit the col soon!  I battled my way up and got to a point where I could see down to the ocean on the west side of the island.  But just more forest behind me.  A path alongside a stream led us up to an impressive black wall of rock with a path to the left. 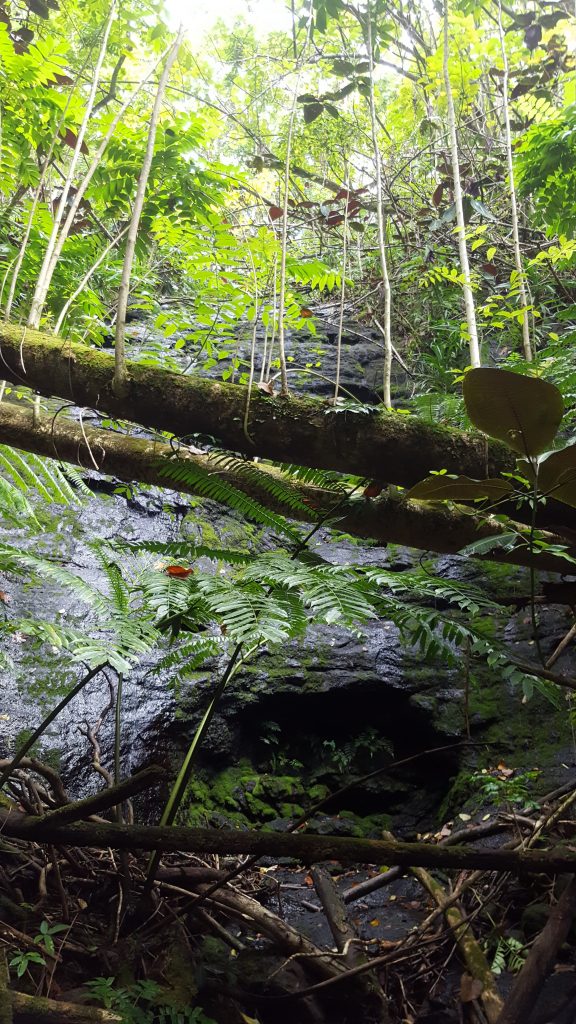 By now we were well past 45 minutes.  This was not an easy route.  We seemed to be heading in the wrong direction. We must have gone wrong way back down at the ‘shelf’ when we chose to go left and not right.

We turned round.  On the way down we noticed slash marks on the trees. In NZ in the back country, hunters and bushmen mark the trees to help them back track.  We started to think that we must have come across the traverse route from Tuatapae which we had read about.  It didn’t take long to get back down to the Mape forest where we spent 15 minutes or so just checking that we hadn’t missed a way on.

Feeling quite weary now and very frustrated and annoyed that we had missed a turn off somewhere, we knew we should really eat to put some energy back in our bodies. We had been bashing through the bush for over an hour but were reluctant to stop until we knew where we were.  So, we retraced our steps. Back down to the ‘shelf’ in no time. As we had thought the first time,  it simply looped down to the waterfall. I crossed the stream and climbed up the other side.  An unlikely route as it was not easy. The stream that fed into the waterfall bounced over dark rocks and I scrambled over and through but could find no easy path.  I heard Nigel call me. 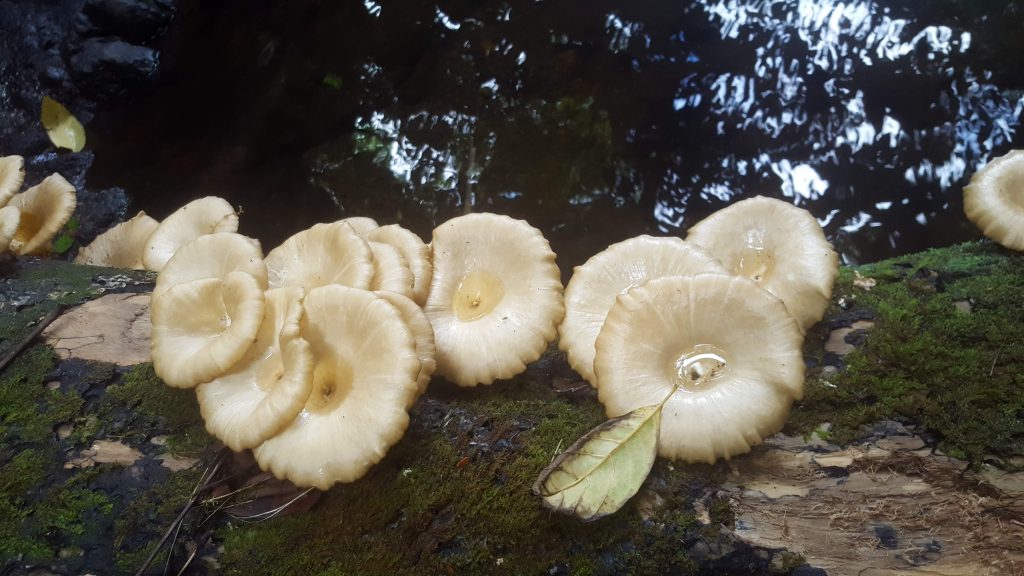 Just a few metres back down the track he had spotted some bits of wood.. broken structures of some kind which he assumed were more of the kids adventure stuff.  Looking the other way,  a track down to the stream was more obvious and Nigel then spotted more wooden debris.  The broken bridge 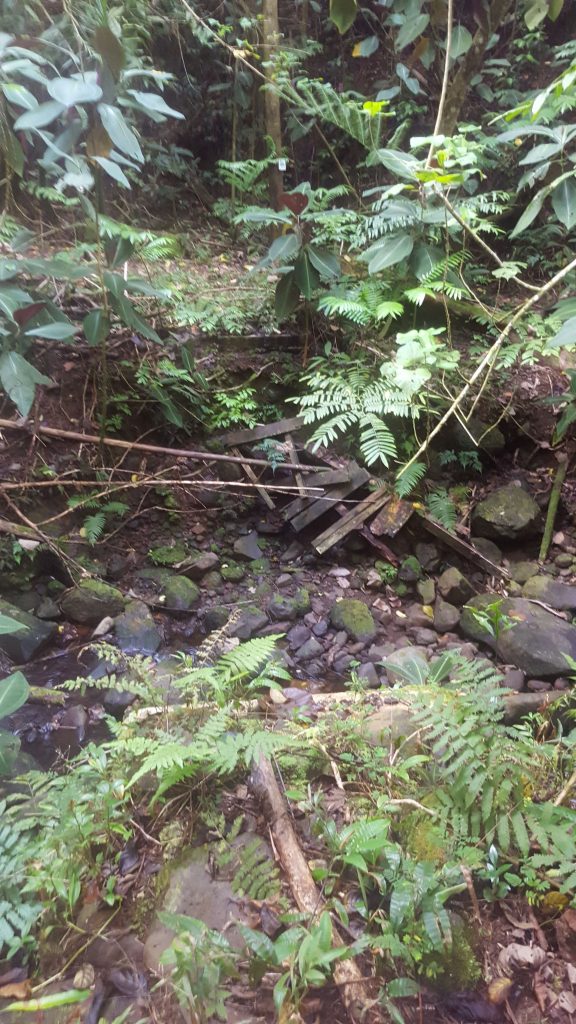 We were back on track! With renewed energy we set off up the much easier, open track.  Still quite gnarly,  lots of trees roots, the path zigzagged up the flank of the hill, the stream gurgling beneath us.

A few very rickety bridges were crossed very gingerly and a couple of fallen trees negotiated. But it was well signposted with Xterra race markers. 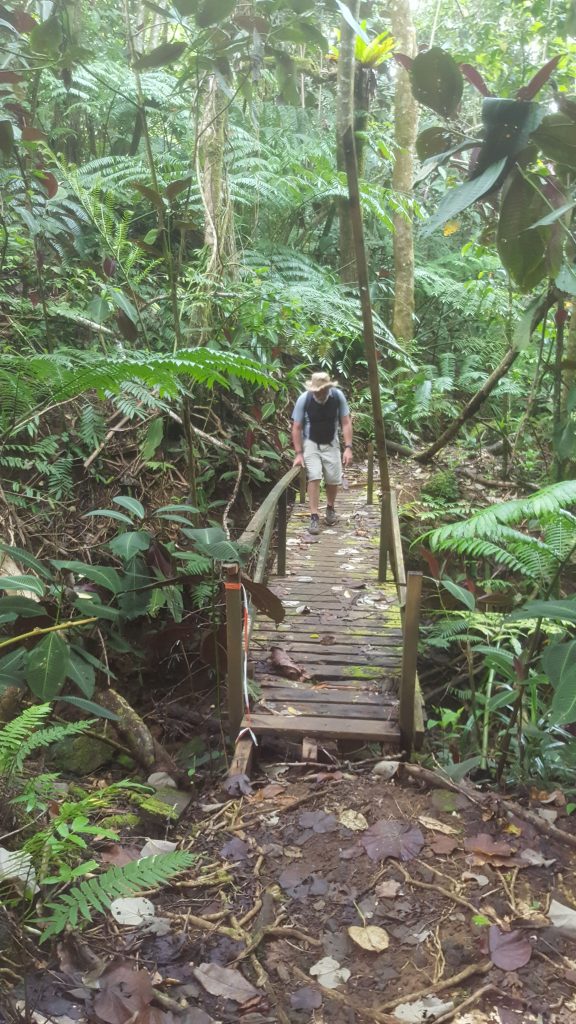 35 minutes later we reached the col!  10 minutes after that we looked out north and south at the coast and along the ridges at the peaks shrouded in cloud.  Stunning! Worth the effort! And time for lunch. 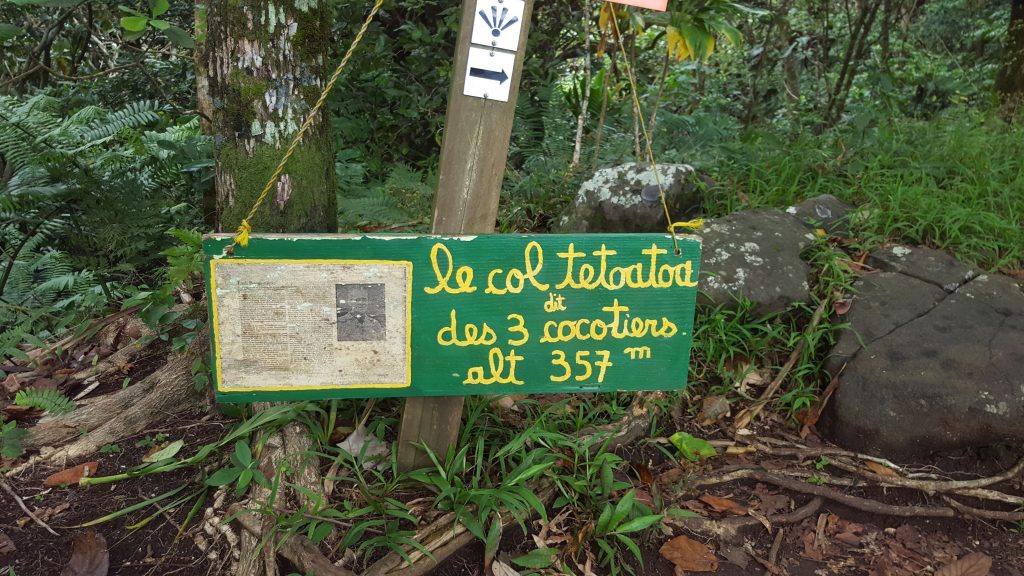 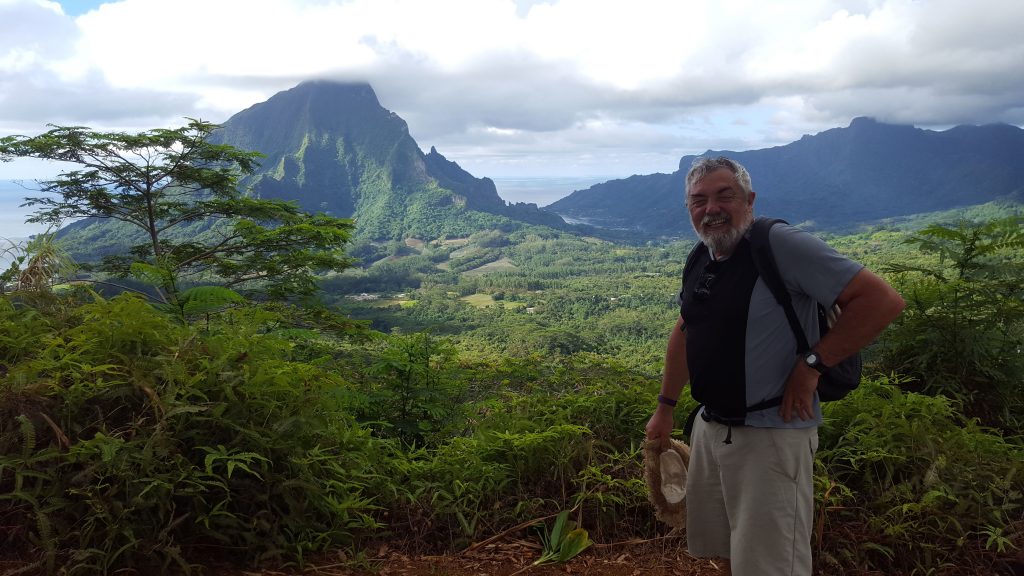 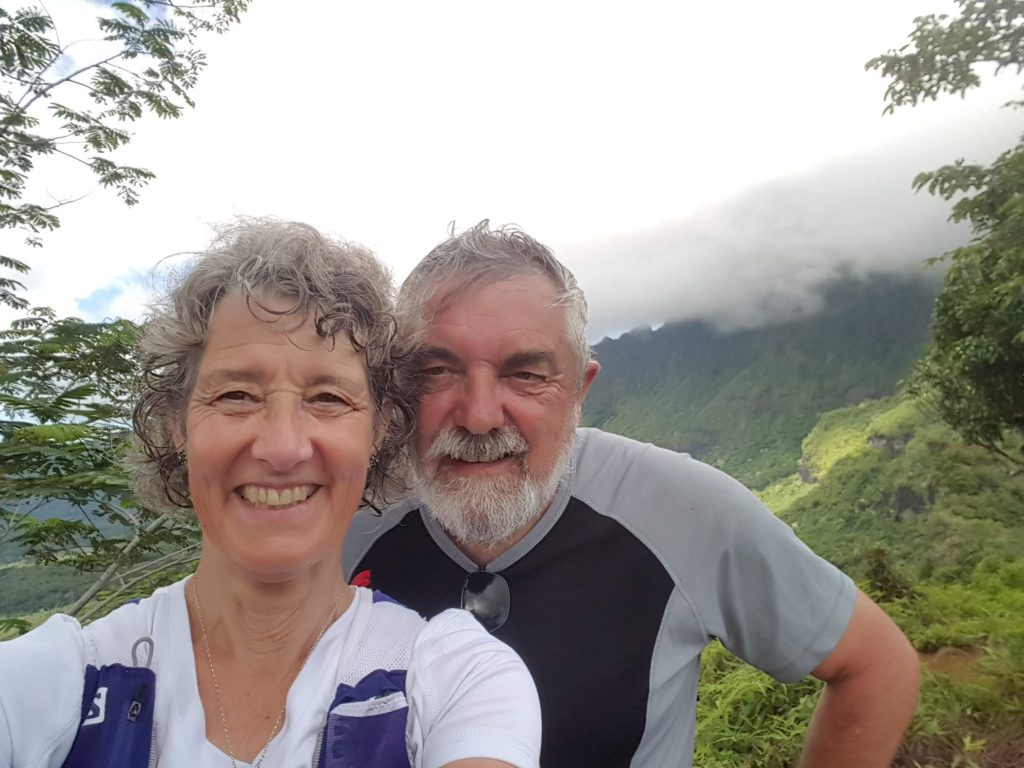 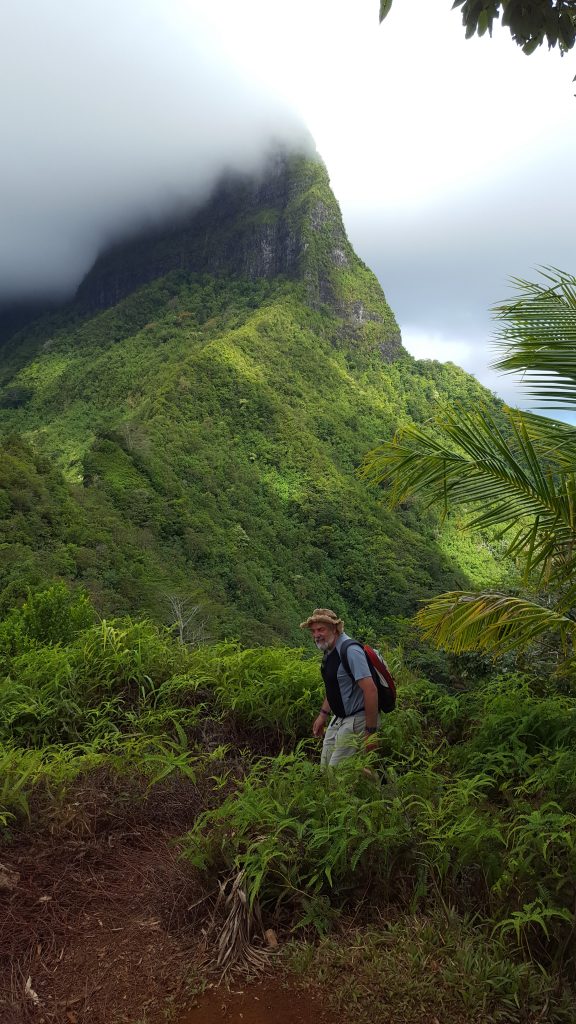 Down was uneventful.  And quick.  Despite stopping to take photos of the abundant, colourful and beautiful flowers on the way. We called into the Vaianae store for refreshment…a nice cool Hinano beer, and we trudged the last 3km back along the road.

Total time on feet: over 6 hours!