Balloons over Waikato and an unforgiving rugby pitch

A couple of things to report today apart from the news that it looks like the weather is finally going to break. A trough of low pressure is coming in from the Tasman Sea and the temperature has already dropped, the sky has darkened and the rain is on it’s way.

This week saw Aonghas’ first rugby ttaining at Marist Rugby Club. He is in Grade 9 Gold team and he seemed to enjoy his first session –

certainly held his own, and was one of the fastest on the pitch so hewas quite pleased with himself. Lachlan has been doing pre-season training at school for a couple of weeks now but it has mainly been fitness work. However they had a pre-season friendly match against a South Auckland team who were bigger and faster than them on Saturday morning. The result was predictable but, in fact, they held their own for the first half and have the makings of a good team. There are several players who have not played rugby before or only played a little bit so the team looked a bit hesitant at times when players didn’t know what to do in set pieces. They were reluctant to meet the tackles (understandably so – I wouldn’t either!!) which meant that the South Auckland

lads (mainly Islanders and Maoris) got a chance to get up a head of steam so were almost unstoppable. Lachlan, as usual, was to be seen hanging onto their legs as they charged down to the try line. He managed 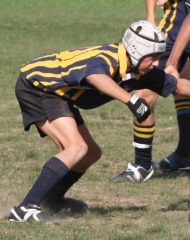 to make quite a few try saving tackles and his coach was quite impressed with him. In terms of ability the teams were quite evenly matched but bulk, pace and fitness certainly won out in the end. All the lads were battered and bruised afterwards – the pitch was bone dry and as hard as hard, photos show the dust rising as they ran – another reason not to want to go to ground! The rain will be welcome! After the match we went back to the school for some refreshment. This isn’t a usual thing but as the team had come down from Auckland – 2 hours away – we felt it was important to feed them! I helped serving the food and along with the other Mums who helped was amazed at the politeness of all the boys. Lots of thank yous, no pushing and shoving – they were all a credit to their schools and parents.

balloons. (what is the collective noun for hot air balloons?) It is an annual event and balloons come from all over the world – this year there was Darth Vader from Belgium! We didn’t catch much of the ballooning earlier in the week – they do all sorts of activities but nearly all start at 6.00am or happen during the school day! Most of the events occur at Innes Common by Hamilton Lake (Rotoroa) However, on Saturday evening the “Night Glow” was held at the University so we wandered up to see what it was all about. Amazing! We didn’t have the best viewing position as we were round the side but the show was pretty

spectacular nonetheless. As the sun went down and the moon came up and darkness fell the balloonists were b

usy inflating the balloons. As we watched we noticed more balloons – they seemed to be really close together and almost jostling for space – snuggling up against each other as they swelled. It reminded me of dough rising when you’ve put the bread buns too close together and they don’t have space to expand! The balloons lit up in time to the music – some of the choreography seemed a bit random but on the whole it was

well done. There was a sort of space age theme due to the presence of Darth Vader I think, but lots of appropriate and popular music for the theme which got the crowd involved. Once the balloons had done their bit it was time for the pyrotechnicians. The wonderfully choreographed firework display, with a clear sky as a backdrop, was quite stunning. Managed to get a few pictures and there are more on

flickr. though they are never as good as the real thing!

This morning we thought we would make the effort to get up and watch the “hurdling” display!? Balloons jumping hurdles – well you just have to don’t you? So despite a late night last night we dragged ourselves out of bed, packed up some honey sandwiches, made a couple of flasks of tea, grabbed some blankets and the camera and headed out to Lake Rotoroa to see the final ballooning display. It was a lovely morning, as the darkness dissip

ated the sky turned a beautiful red and then blue. A few clouds but generally blue and still though cold. When we arrived we wondered why some people were going in the opposite direction to us but there seemed to be plenty of folk on the common and we could see the bright orange flares of the hot air balloon burners so we pressed on. Wandered around for a bit, Lachlan and Aonghas had a peer into a balloon basket whilst the owners explained what all the gadgets were for, noticed that some of the balloonists appeared to be packing things up and soon found out that the morning’s display had been cancelled because it was too windy! It didn’t seem that way on the ground but apparently up the in the sky it was, so that was that! What a disappointment! Getting up at 5.30am on a Sunday morning for nothing!!!! Oh well! Boys had a play in the playground, we took some photos of the Pukeko and then headed back home and spent the next five hours playing Monopoly – Dad won! Enough said!

Monday 4th brought reality to Lachlan and Nigel when we had to start school and work. Lachlan went off a little nervously

as he really had no idea what to expect unlike when he started QES which he had been familiar with since he was born! He came home smiling though so it can’t have been all bad. In typical uncommunicative teenage boy fashion getting any real information from him was like getting blood from a stone! Aonghas and I had a leisurely day at home – it was too hot to o anything else! We walked to the library to get signed on there and check or e-mails and then went to register with the doctor and dentist – all in one place with the chemist, physiotherapist, homeopath etc so really handy. Everyone is really helpful and very pleasant.

The University campus is pretty neat with tree ferns here and there and Maori carvings fronting some of the buildings. Starting a new job

is always a bit of an anti-climax I’ve found as you have this great expectation but then can’t actually do any real work as you are too busy finding out about how the place runs, what the systems are, meeting people, finding out where to have lunch, where the loos are, etc, etc. The folks that I’m working with are really cool though and a week in, I think I’m starting to find my feet. Also found that there seems to be a delayed jet lag – by the middle of the afternoon I could happily fall asleep at my desk.