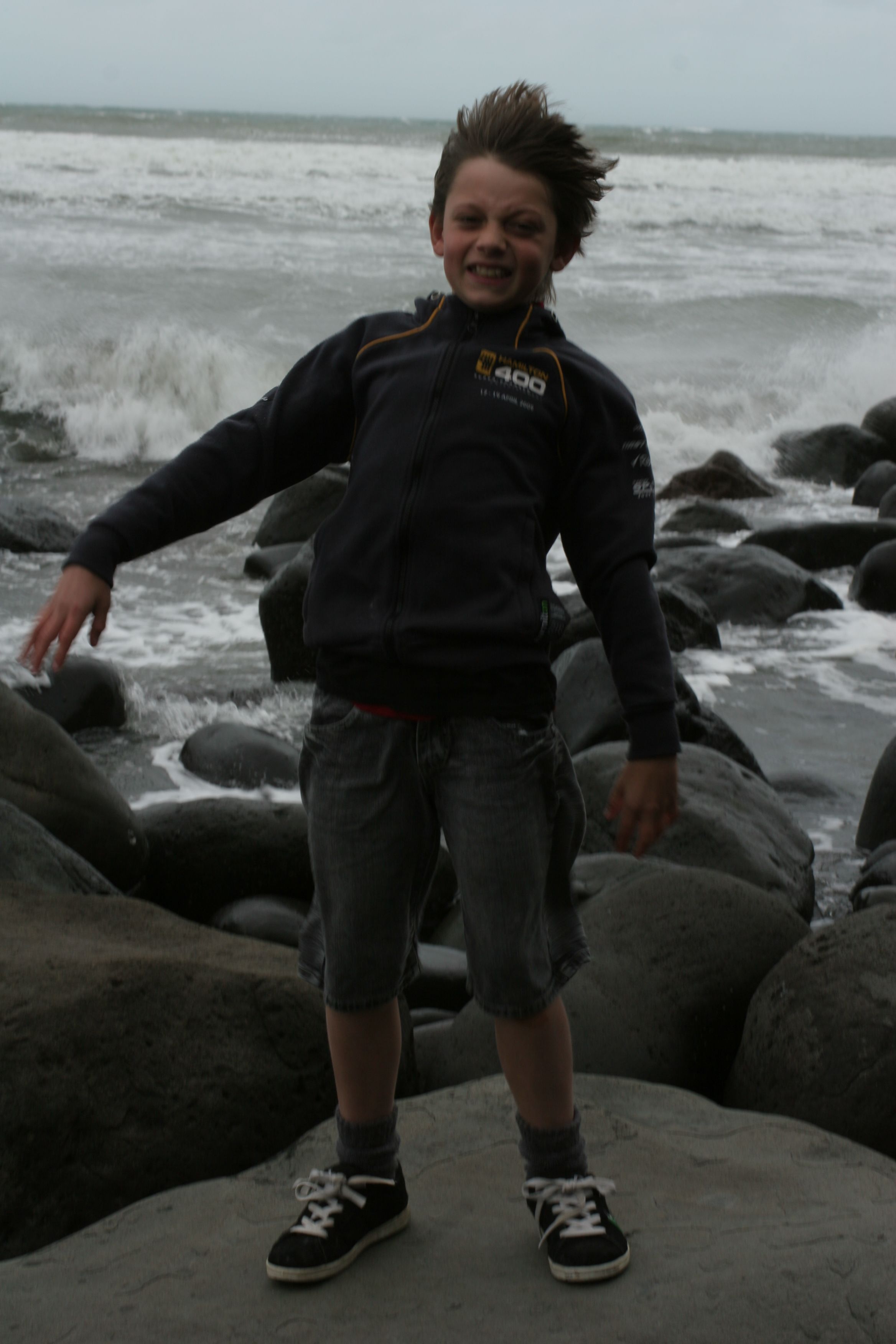 It rained all night, and rain on a tin roof always sounds like it is a lot heavier than it really is! It was windy too and the sound of that is similarly amplified when you are in a small tin box. Nevertheless, the small tin box was warm and cosy and by the time morning came around the rain, at least had stopped. Another leisurely morning, I was resigned to it by now and in fact was happy to stay sleepily snuggled up in my duvet, with my own personal bedwarmer (Nigel!). However, we couldn’t stay there all day as “that would be a waste”! I was keen to explore down the coast and maybe have lunch in a cosy cafe and buy something nice in one of the craft shops that I had been told were dotted around. Surf Highway 45 is a route that according to the guide “passes dozens of surf spots and many more cafes, art and craft studios and eclectic antique shops”. So we piled into the car and set off for Opunake, deciding that we would go straight there and then stop at places we had earmarked on the way back. The wind buffeted the car all over the road and Nigel must have had a good work out maintaining a straight line! It has to be said that we were quite disappointed with the villages/towns we went through; sad, ramshackled, abandoned looking places with tatty buildings, sprawled along the roadside, sometimes a pub or a bar or a village store. I guess that they may look a little different in the summer and maybe they were closed up for the winter; it is true that this is a surf haven which comes alive in the summer months and the population balloons. The beaches are often a few kilometres from the road, so there is a disconnect between the two, maybe there is no real 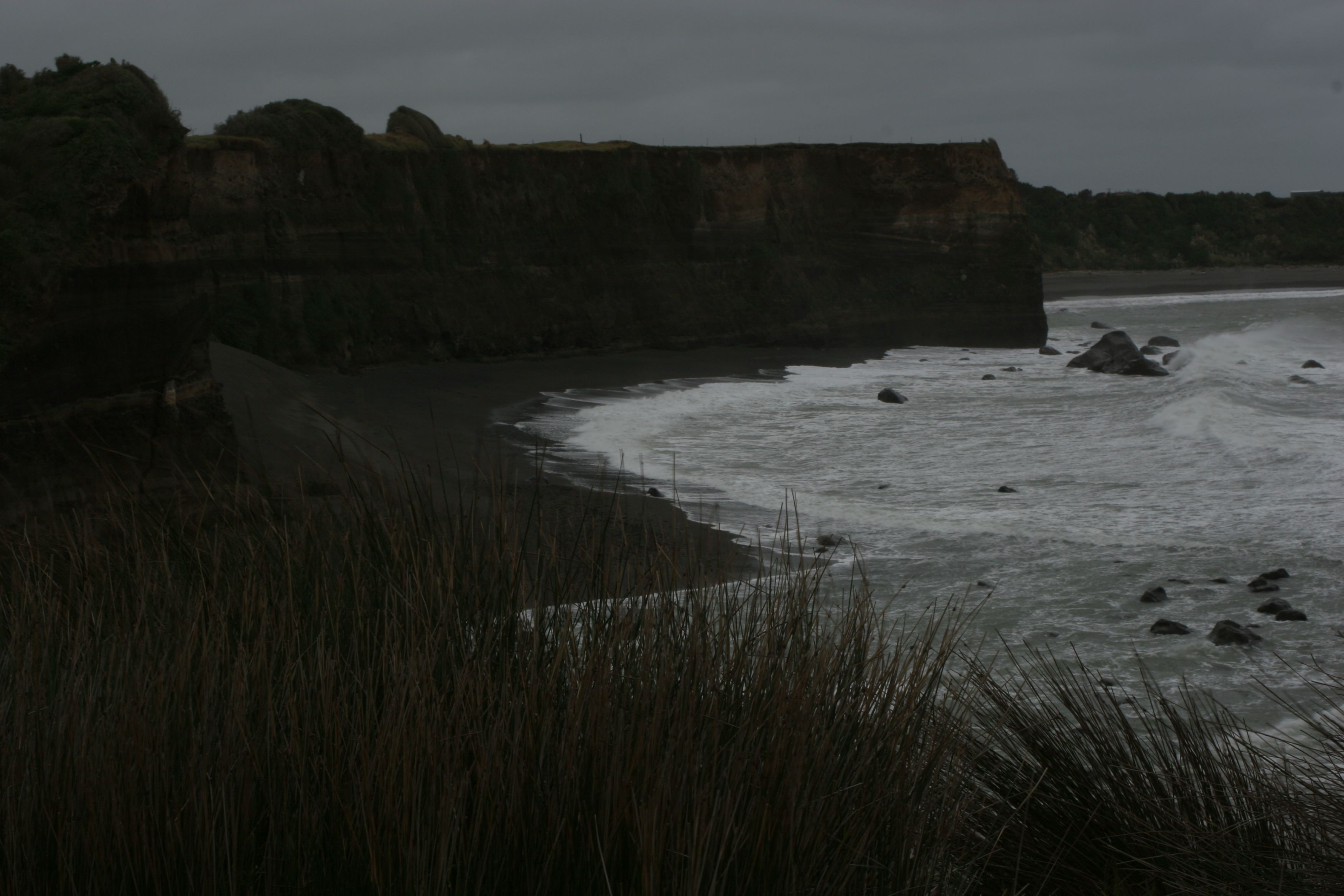 reason to have a community except in the summer?

Opunake is actually on the coast so the beach and the town are close together. It is a bigger community than any that we had come through and “home to distinctive murals, cosy cafes, eclectic shopping and a laid-back surf culture”. It certainly has murals and they definitely brighten up the place on a cold wintry day, we found one cosy cafe although I guess in season there may be others that simply shut up shop in the winter, as for shopping – well there was little evidence of any opportunities there! After a brief walk on the beach we found refuge in the Sugar Juice Cafe which is certainly worth a visit – great coffee, a huge range of delicious food, warm and welcoming. Go there!

The (World Famous) Egmont Soap Factory has its home here too – push on the boarded door with its faded “Open”sign on an old wooden shed with a tin roof, and you find a draughty room with a couple of tables laid with baskets full of different coloured soap. The cloying smell of mingled fragrances is heavy in the air and almost makes your eyes water. It made me think of Christmas parcels we made up for elderly great aunts and grandmas with handkerchiefs and bars of lavendar soap. We almost turned 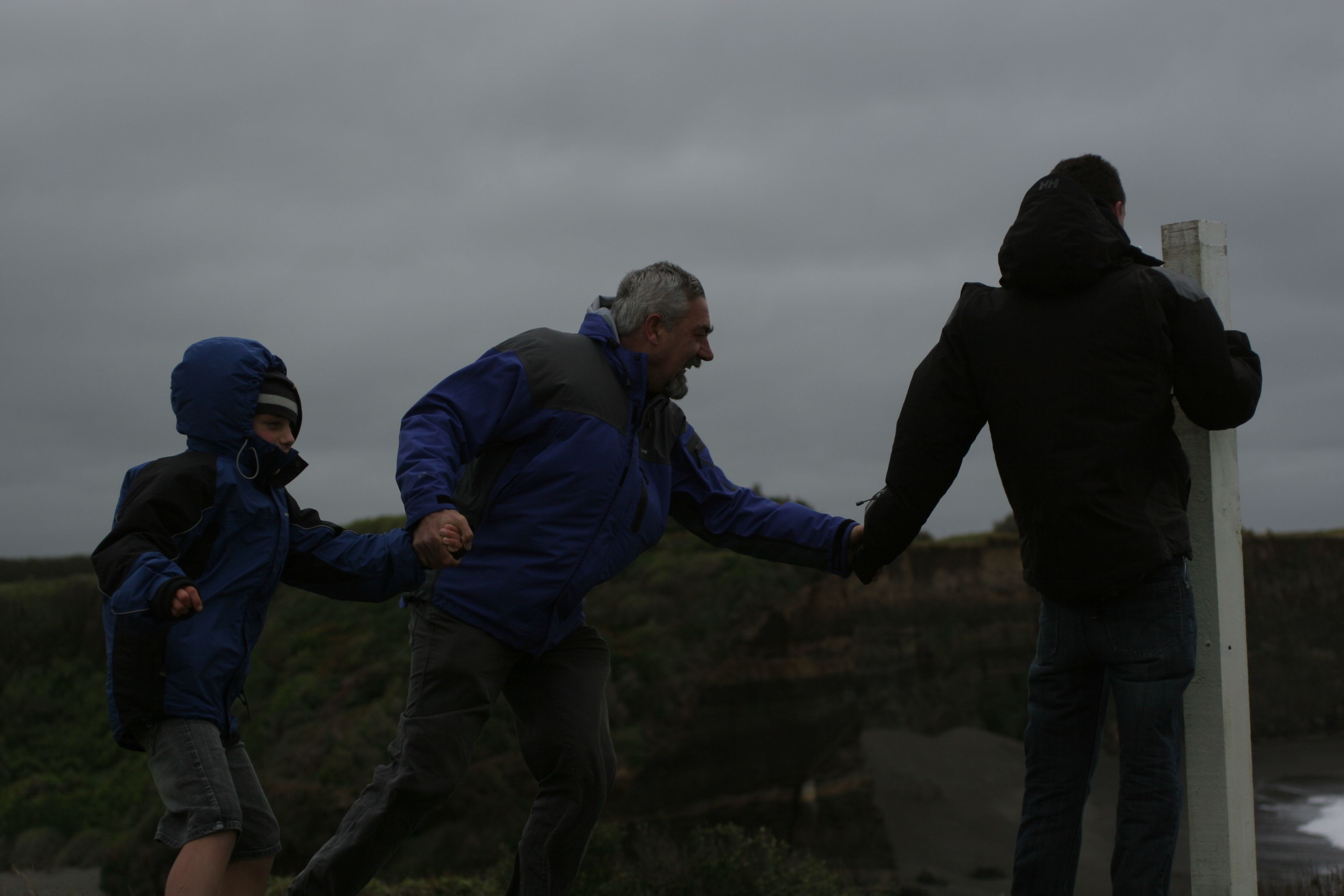 to leave as an old shabby looking man shuffles out of the back room and greets us; he is a garrulous chap with a friendly smile and he engages us in conversation. Where are we from, doesn’t he know me from somewhere? He has relatives in Hamilton and he starts to tell us tales of meeting people and always remembering a face so he must have seen me somewhere! He tells us how the soap is made and how as a retired Chemist he got involved in the business and which big companies buy it and use it wrapped in their own packaging, how they have developed the lines and have branched into sensitive skincare products. The most interesting part, though is the machinery he has developed for making the soap; a collection of cast off contraptions from dairies and other agricultural establishments that he has adapted and refined, for example the machine for stamping the pictures on the soap is an old cheese press. It is real No8 wire stuff and it would have been fascinating to see it all in action. Winter is clearly not manufacturing time, though and for the moment it just looks like a pile of old machinery that has been stored indoors before sending to the tip! We bought a few bars of soap (how could we not?) and he gave the boys a free sample bar each before we carried on our exploration of Opunake.

Lachlan was reluctant to brace the cold south easterly and walk along the coast and, I have to admit, there was a part of me that said let’s 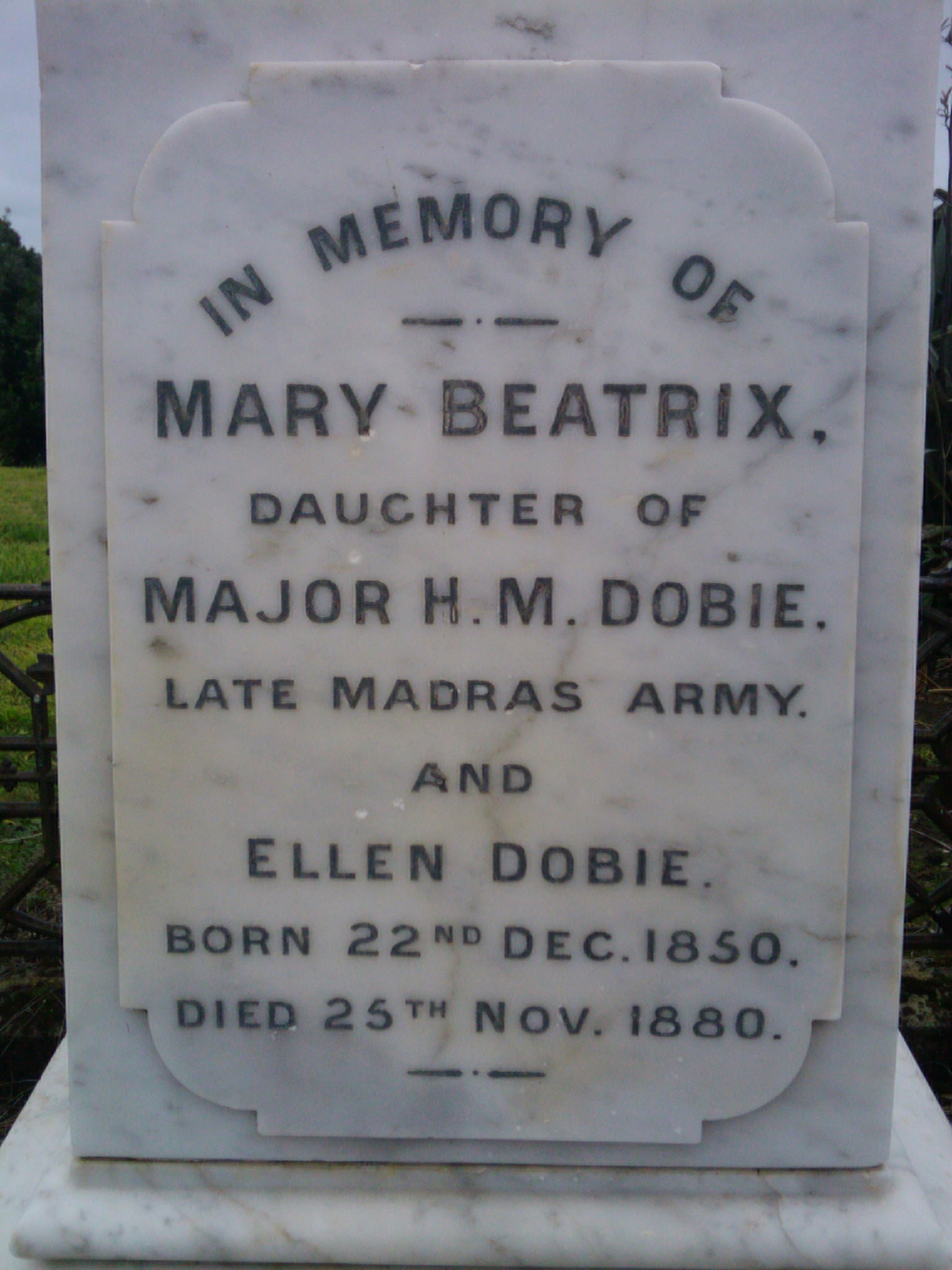 just go back to the bach and curl up by the fire. But we were there, and it may be a while before we go back and it would have been a waste to drive all that way just to sit in the bach and not see what we had come to see! So we wrapped up in all our woollies and waterproofs and strode out to face the wind. The coastal walkway takes you first to a small graveyard where lie a few souls from the Armed Constabulary that were stationed at Opunake in 1880. There is a quite large memorial erected by the non-commissioned officers and men of the Armed Constabulary in honour of Mary Beatrix who died at the age of 30 in Opunake. We thought it strange that there should be such a large memorial and speculated as to the reason. Googling is a wonderful thing and with just one or two clicks I have found the story behind the name.

We walked on along the cliff top that follows the river out to the ocean, the wind at times gusted hard enough to blow us off our feet; fortunately it was blowing onshore but even so I was a little nervous! I love the wind, though, and despite its strength it was not too biting; we were wrapped up warm and it 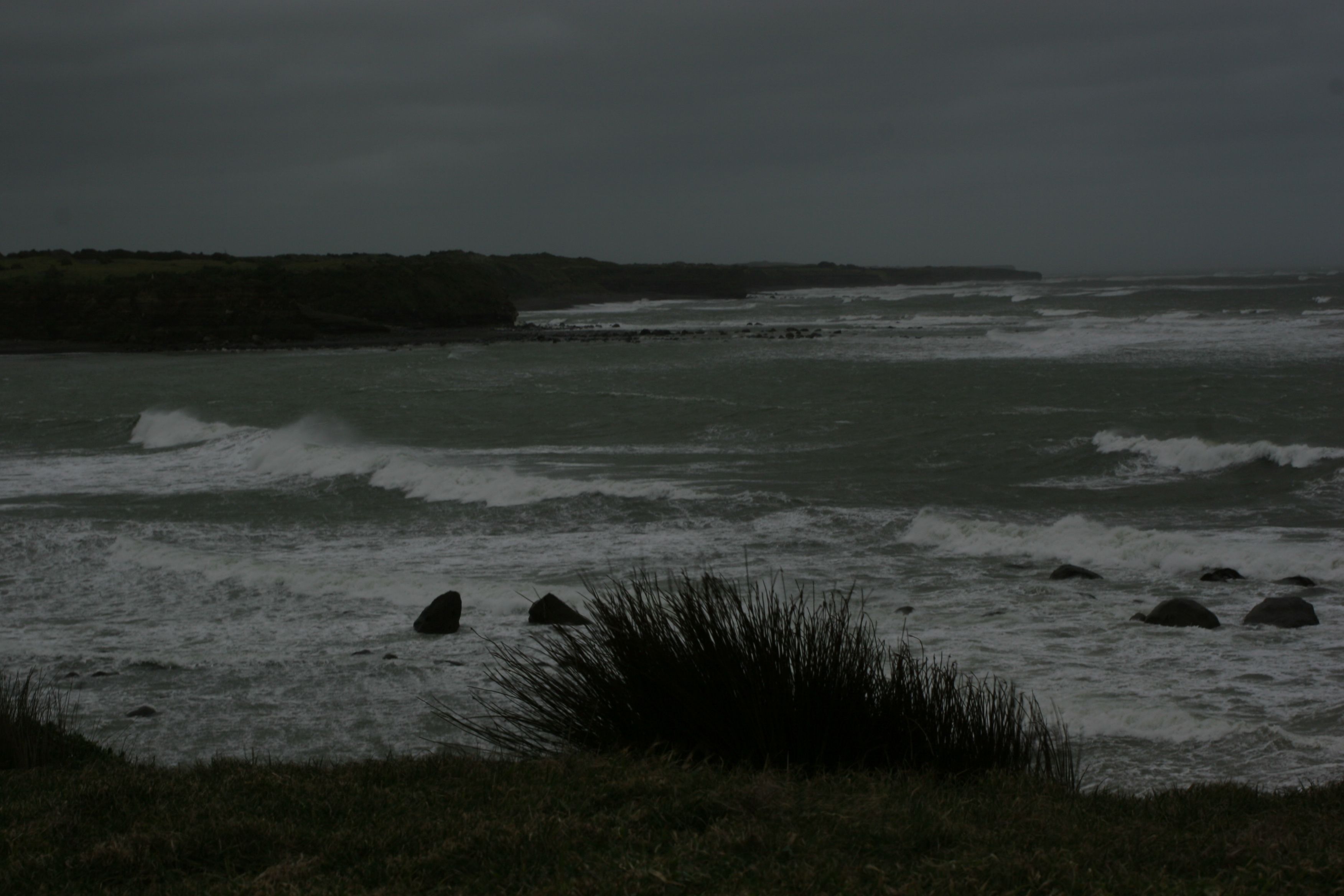 was exhilarating to be high up above the ocean battling against the elements. The sea was wild and mesmerising as we watched the waves crash over each other, the spray being blown off the crest as it broke. We didn’t do the whole coastal walk, we just dipped into sections jumping back into the car in between but it was enough to get a flavour of the place and blew the cobwebs away!

At the westernmost point of the Taranaki coastline we stopped at the Egmont Lighthouse which was made in England, shipped in sections to NZ and was originally on Mana Island near Wellington before being brought to Taranaki in 1874. It was simply a photo stop because by this time the boys had had enough of getting in and out of the car and just wanted to go home! They were singularly unimpressed with this small lighthouse which was positioned well inland as far as lighthouses go – usually they enjoy getting out and clambering over rocks to reach lighthouses! 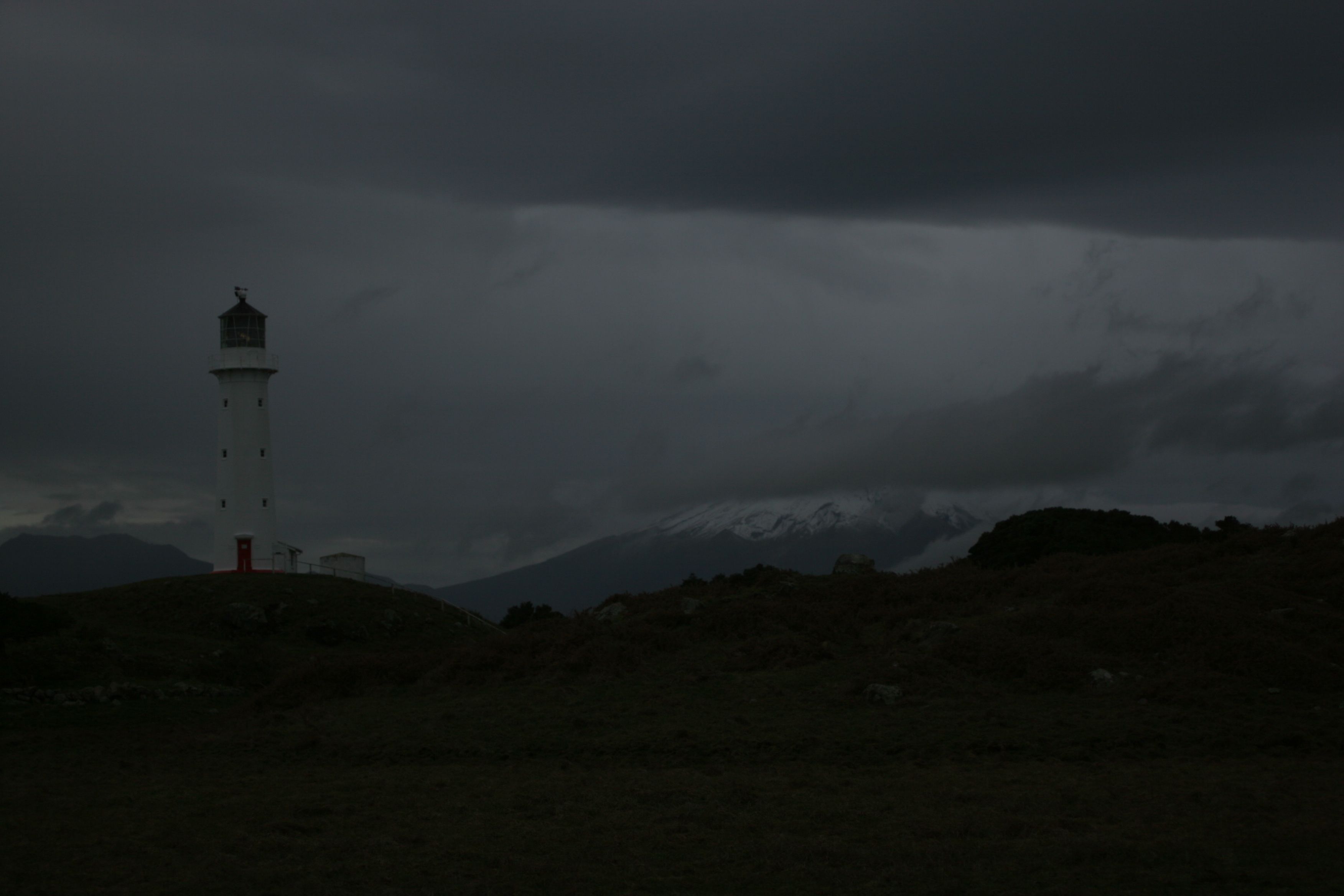 Gus had been pestering all week about going out for dinner to a restaurant, several lunches in cafes just weren’t enough for this lover of fine food and dining out! So we headed into New Plymouth after a quick wash and brush up back at the bach since it was our last night. We found a lovely Italian restaurant called “La Bella Vita” where we ate well and had a thoroughly pleasant time.