Having  gone left yesterday, today we went right. The plan was to go all the way to Waipapa Lighthouse and then work our way back but we were distracted by the Lost Gypsy Gallery which at first glance seemed to fit the bill to be in Owaka – rusty old bits of bicycle fashioned together and a ramshackle caravan. 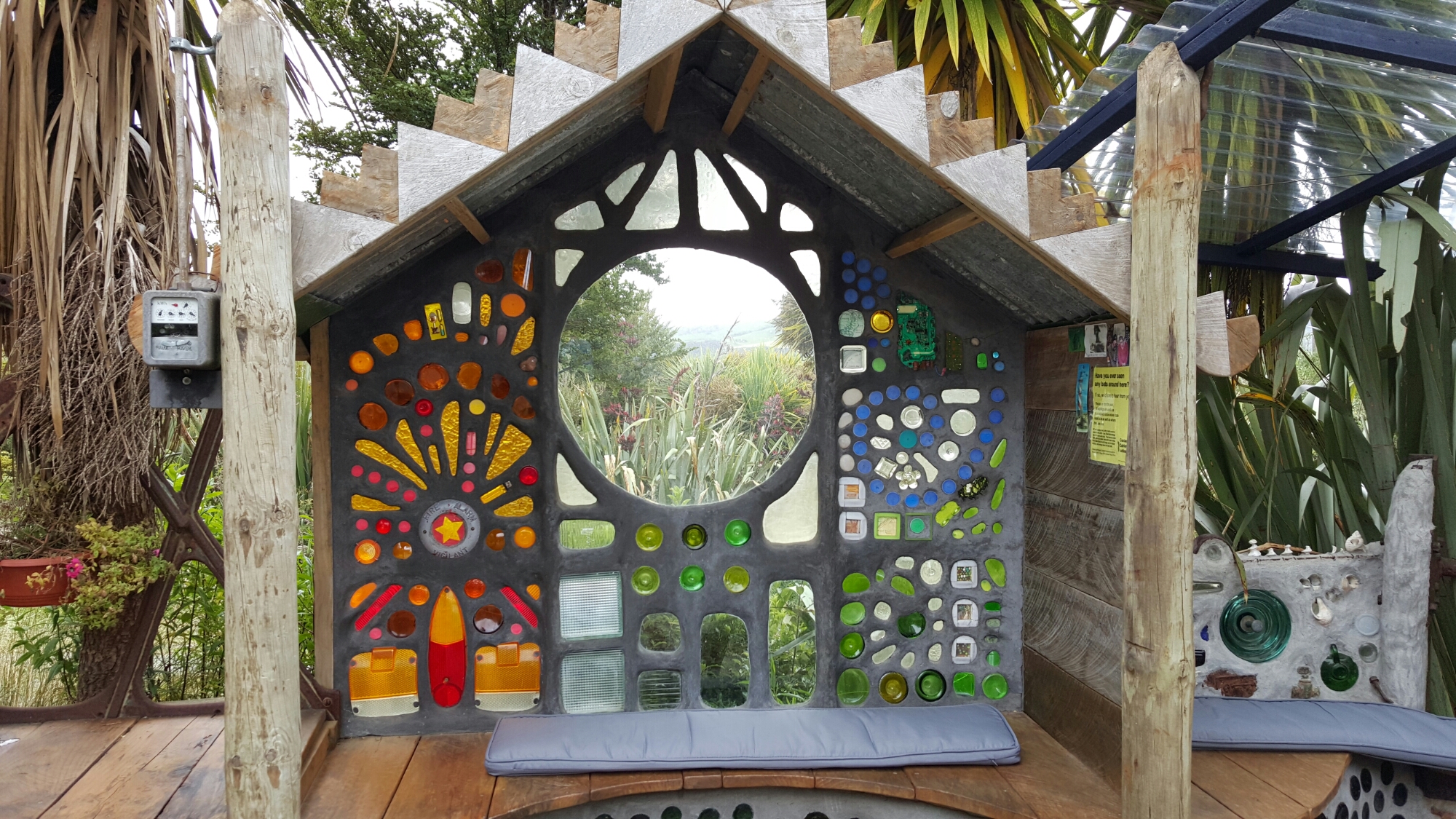 However, we were soon mesmerised by the quirky, ingenuity of the ‘lost gypsy’.  A hundertwasser style coffee shelter with coloured glass bottles embedded in bench seats and  walls along with a myriad cornucopia of cogs, wheels, old tools, coins and anything else I recognised from my dad’s collection of tins in his shed.  The ‘temptation’ button tempted us (and everyone else who went past!) and our transgressing was rewarded by being sprayed with water. 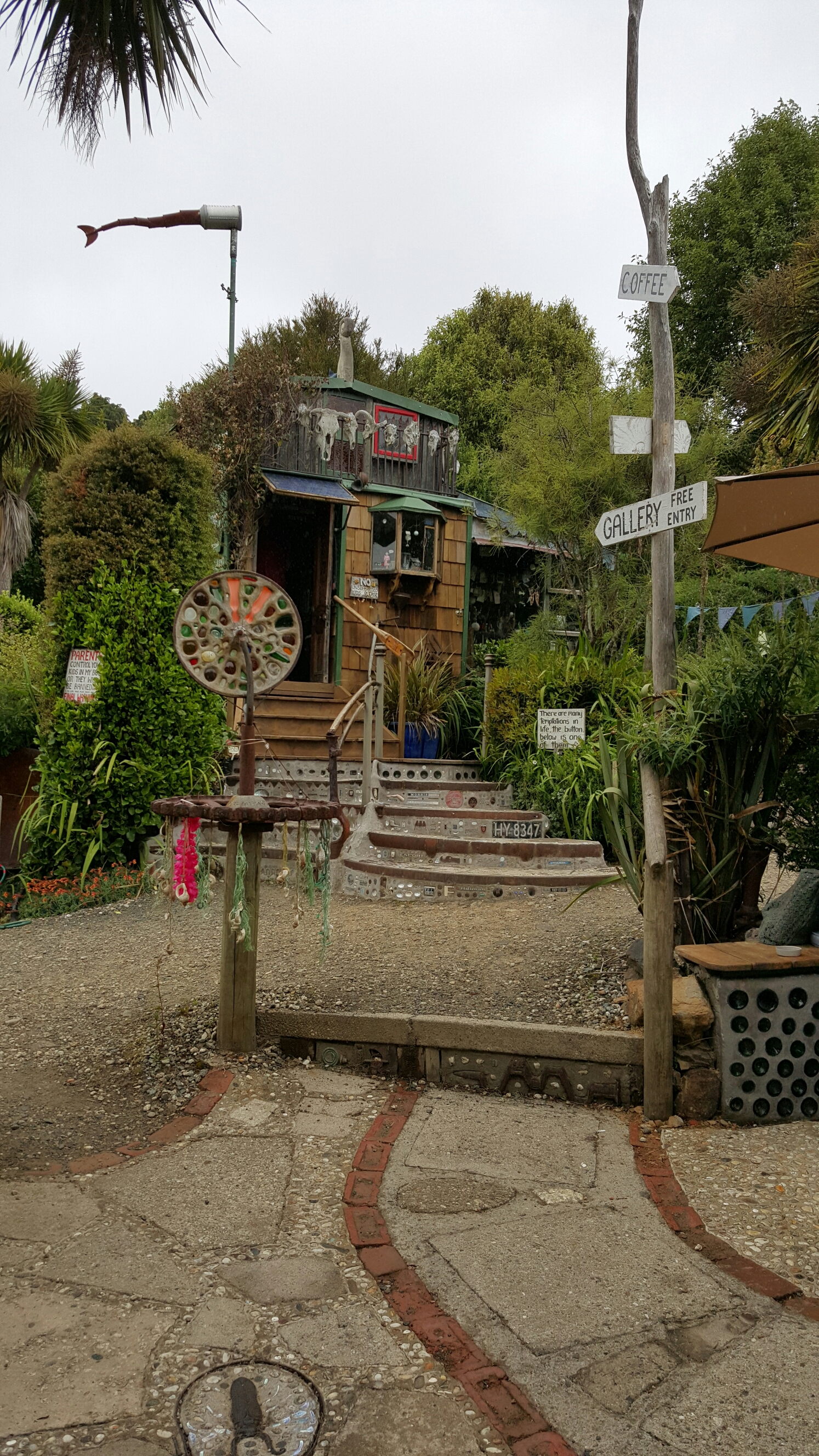 Inside the old caravan is packed with an amazing array of inventive engineering using aforementioned bits and bobs of everyday life. All those things my Dad hoarded because they might come in useful; springs, wires, string, bolts,  nails, cogs, wheels artfully blended with shells and driftwood with snippets of cartoons, interesting newspaper cuttings, pithy sayings and political satire thrown in for good measure.  Press a button and a wee train runs around a shelf above your head activating lights, jingles and other stuff. Kaleidoscopes,  light boxes, mechanical trompe d’oeil – the more you looked, the more you saw.  We spent a happy half an hour exploring the caravan and were so intrigued by it all that we decided to pay the princely sum of $5 each to enter the ‘Theatre’. 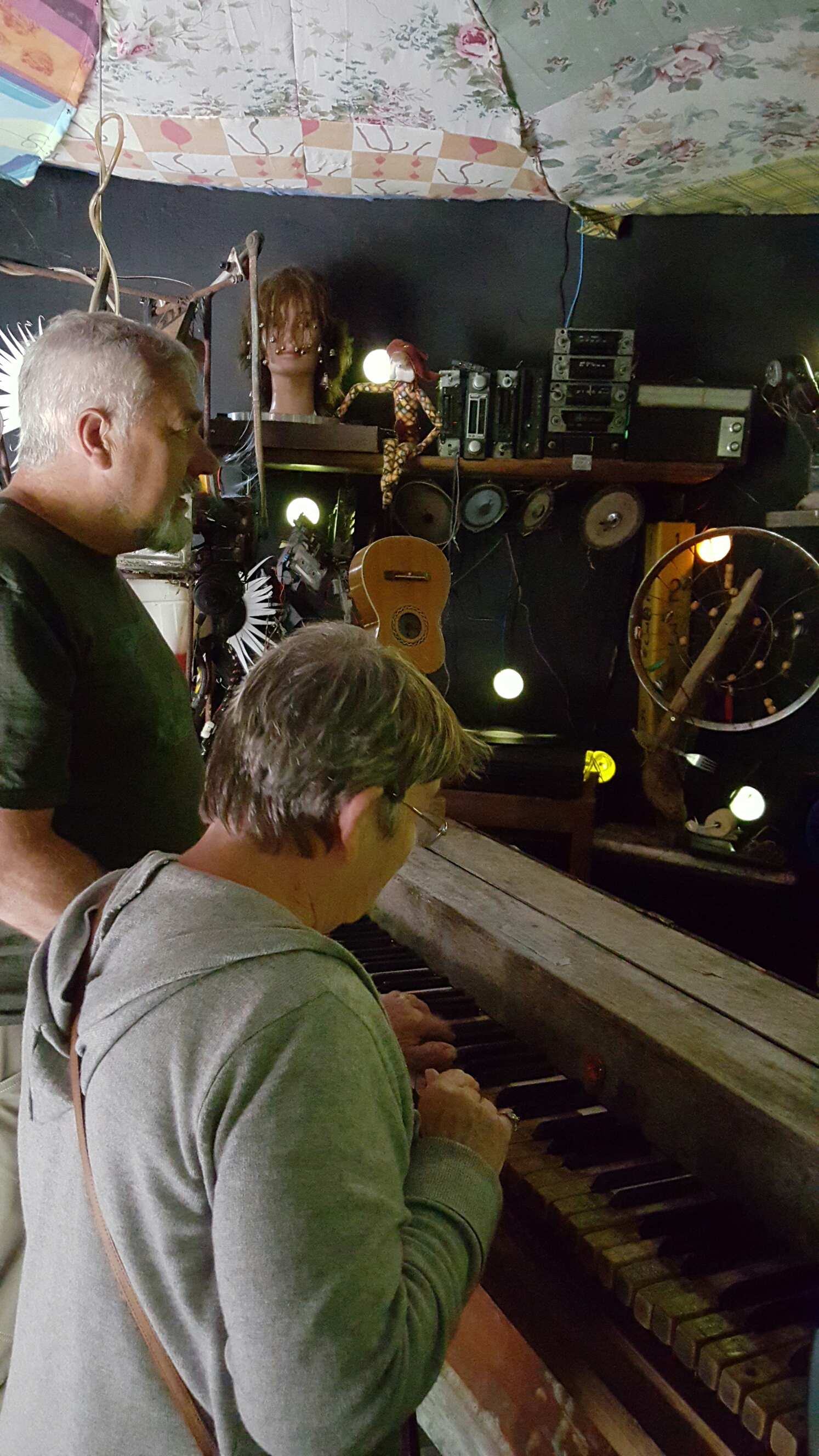 The ‘Theatre’ houses larger scale inventions,  some simple and some intricate but all made of things we would normally throw away; old telephones, bicycle wheels, bits of transistor radios,  television tubes, dolls, buckets, bells,  hairdryers,  whistles…..  The pièce de résistance was the piano, each key activated a different set of noises or actions. We must have spent a full half an hour ‘playing’ and identifying which key did what in this amazing theatre of light, sound and action.  Probably the best 5$ I have ever spent.
Back on the road we amended our plans. 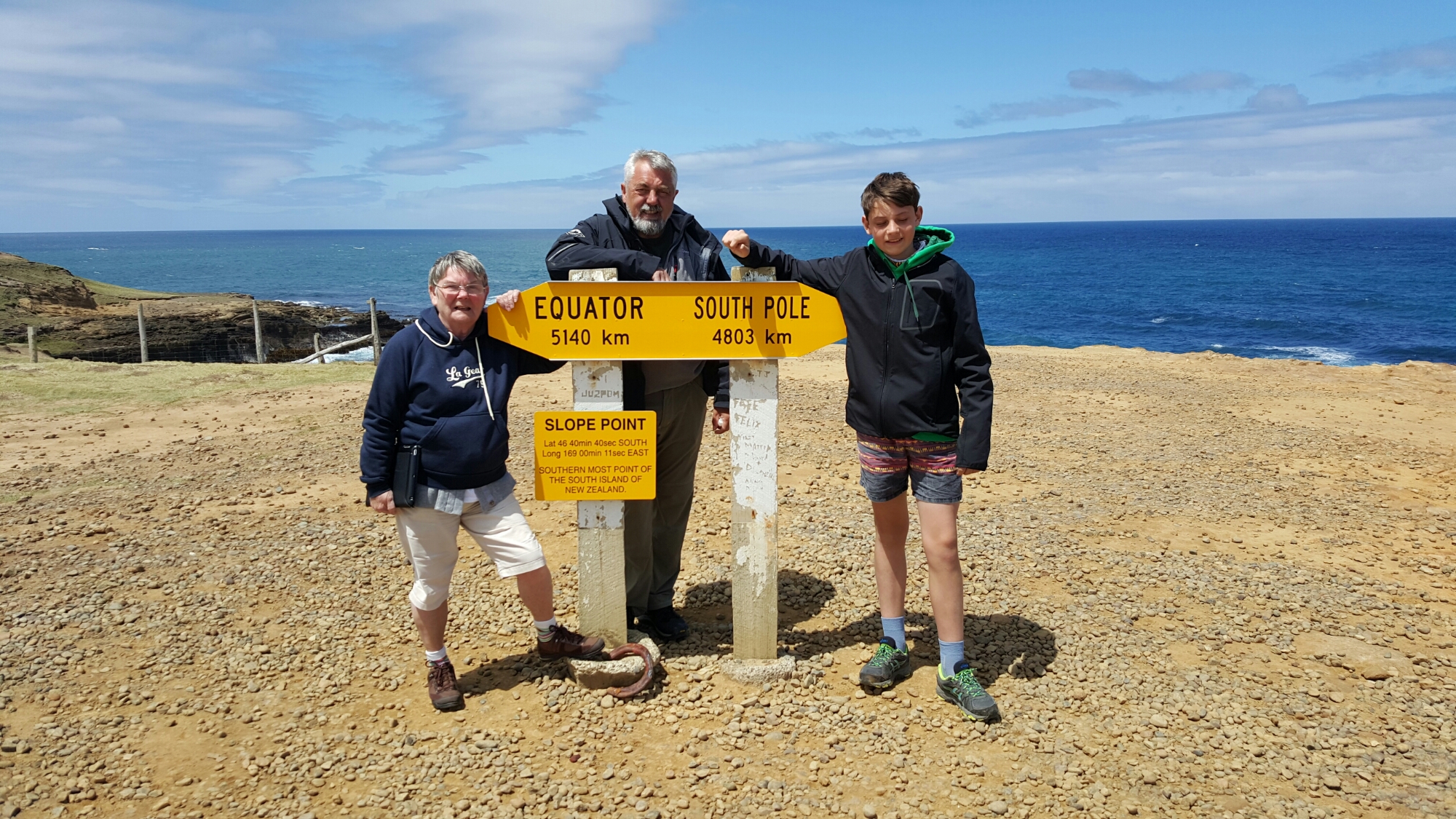 The day hinged on getting to Cathedral Cove for low tide so we decided to go straight to Slope Point and miss out Waipapa.  The rain fell for much of the car ride but cleared by the time we got to the most southerly point of South Island. Here the trees and grass appear to grow horizontally so strong is the prevailing wind!  It was a bracing walk to the point which is marked with signposts indicating the distance to the two poles.   Below the waves crashed on to the rocks the white foam exploding out of the blueness of the water on impact.  Mesmerising.
Onwards now to Curio Bay where 160 million year old trees lay petrified in the rock. Mud and ashflow from volcanoes felled the forest and buried the trees, the ocean levels rose and all were covered. Dropping sea levels exposed the rock and the action of the waves has gradually eroded the softer rock around the trees so trunks and stumps are clearly visible. 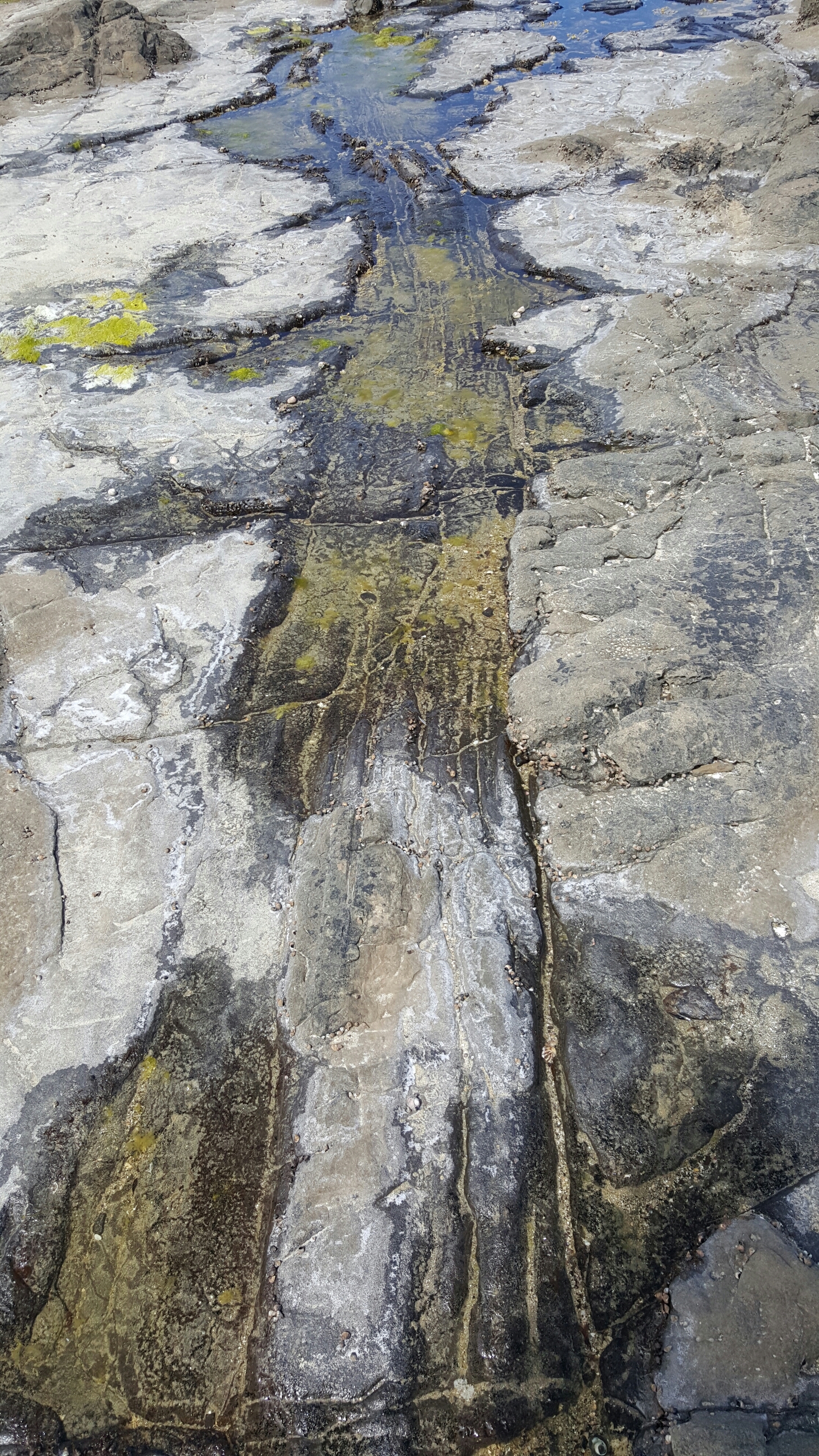 I love walking around rock pools anyway but Curio Bay is special. Once you get down onto the bay and look from ground level you can see the extent of the tree stumps and easily visualise the forest – tall, leafy trees where now there are only stumps.  Where there might have been lush undergrowth there are now rock pools rich with life – easy pickings for the gulls, oyster catchers and shags that stalk the beach. 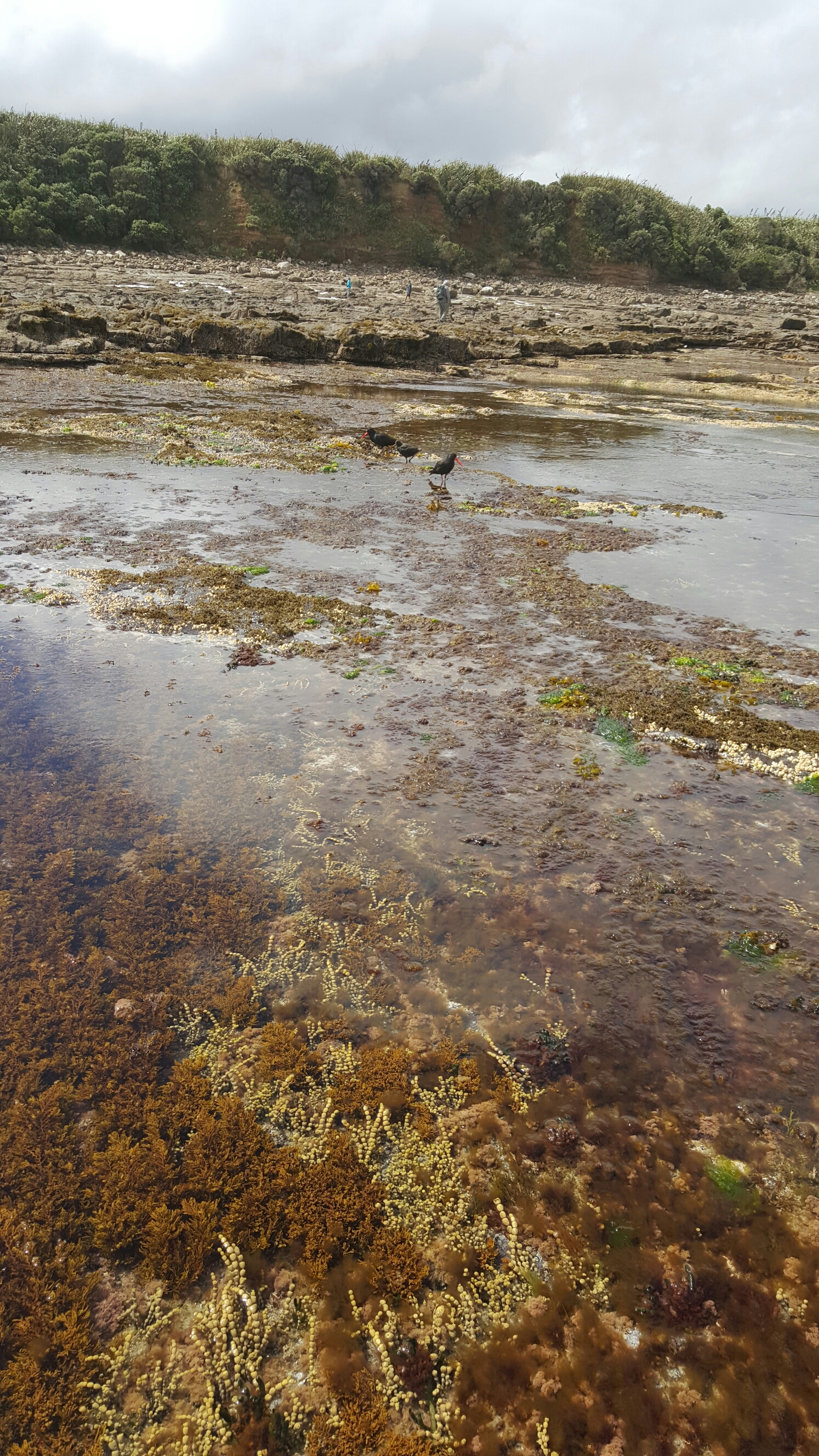 Seaweed is an incredible plant, isnt it?  There is a narrow channel there which is full of huge ochre coloured seaweed. clamped to the rock at one end its long ‘tails’ are free to snake backwards and forwards as the waves pulse in and out.  It is other worldly and the ‘heads’ atached to the rock made me think of the ‘ood’ from Dr Who! 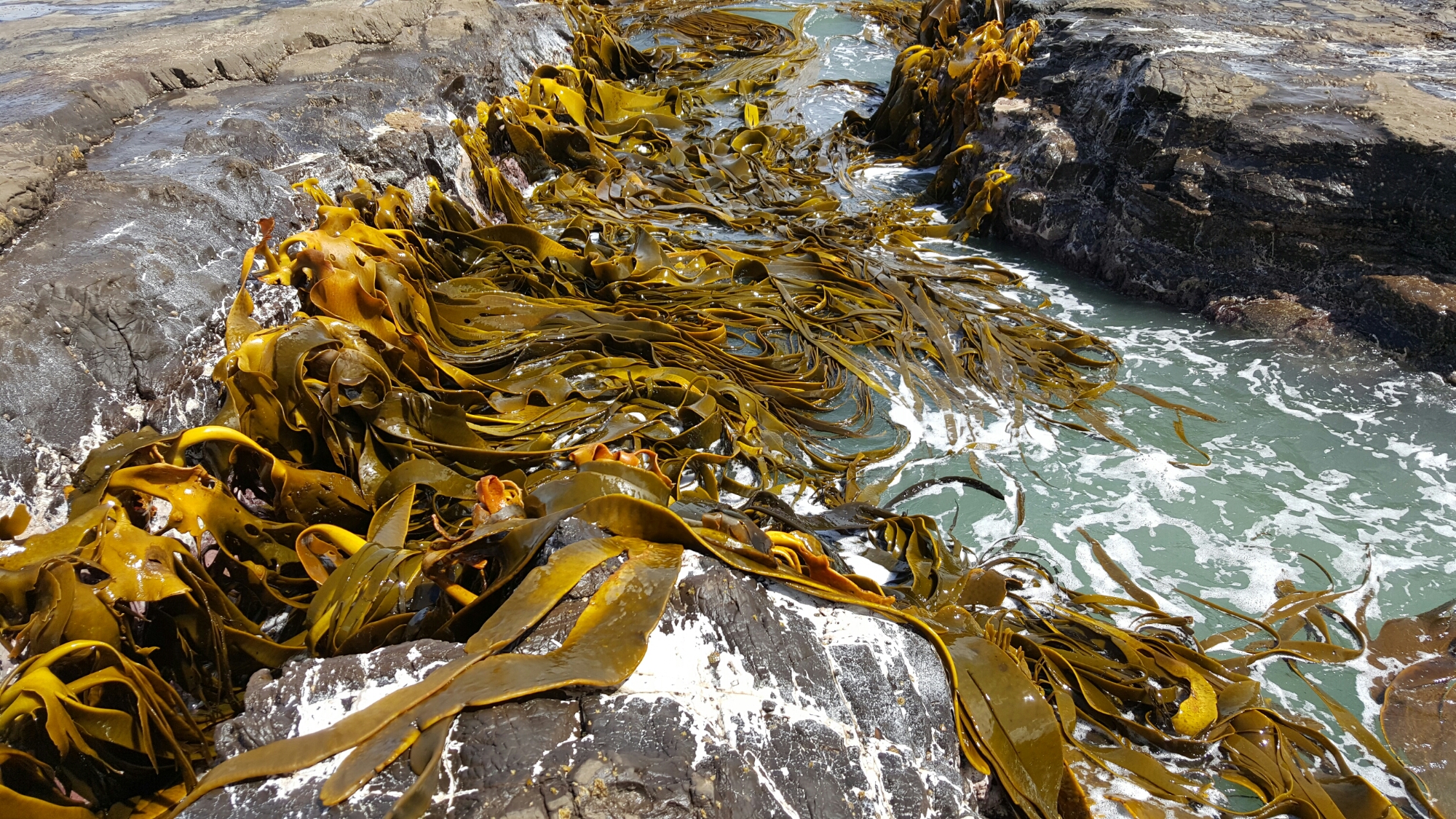 Yellow eyed penguin nesting sites are roped off to protect them but it is sad that some people ignore the signs.  We spotted a group clustered up on the rocks close to the shrubs and dunes and realised that they were following a penguin.  Nigel managed to get a great video with his new camera on zoom of the penguin hopping away but that was the closest we got. 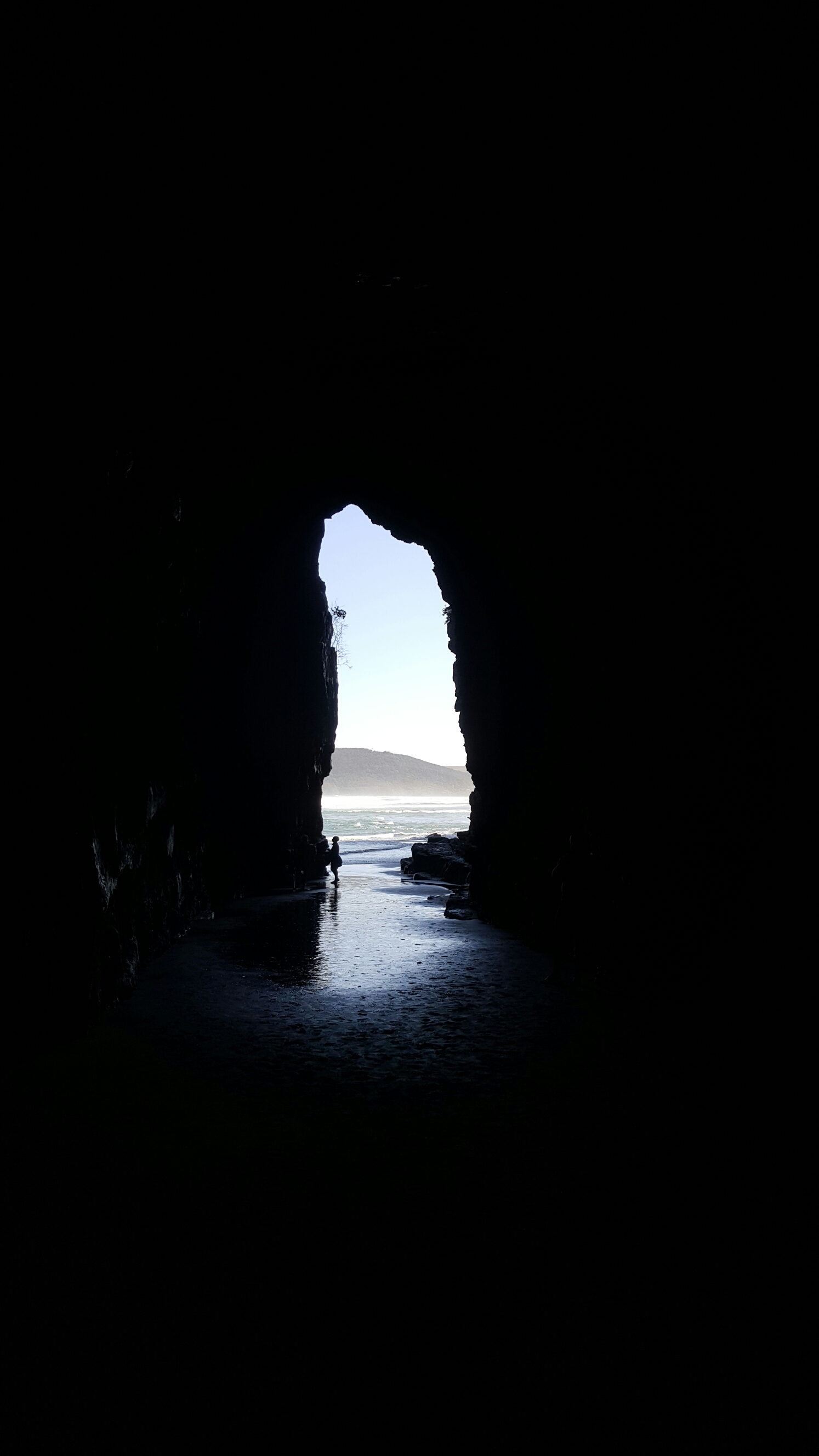 Last stop of the day was Cathedral Cave. You will get wet, she said. How wet will depend on how well you judge the waves. We got wet! The huge caves are formed by erosion from the waves beating against the cliff.  Cathedral Cave is unusual in that there are two parallel caves which join at the back and form a horseshoe.  Apparently, years ago they were easy to access at low tide but the sand level shifts over the years and currently it is lower so the sea is always around the entrance. 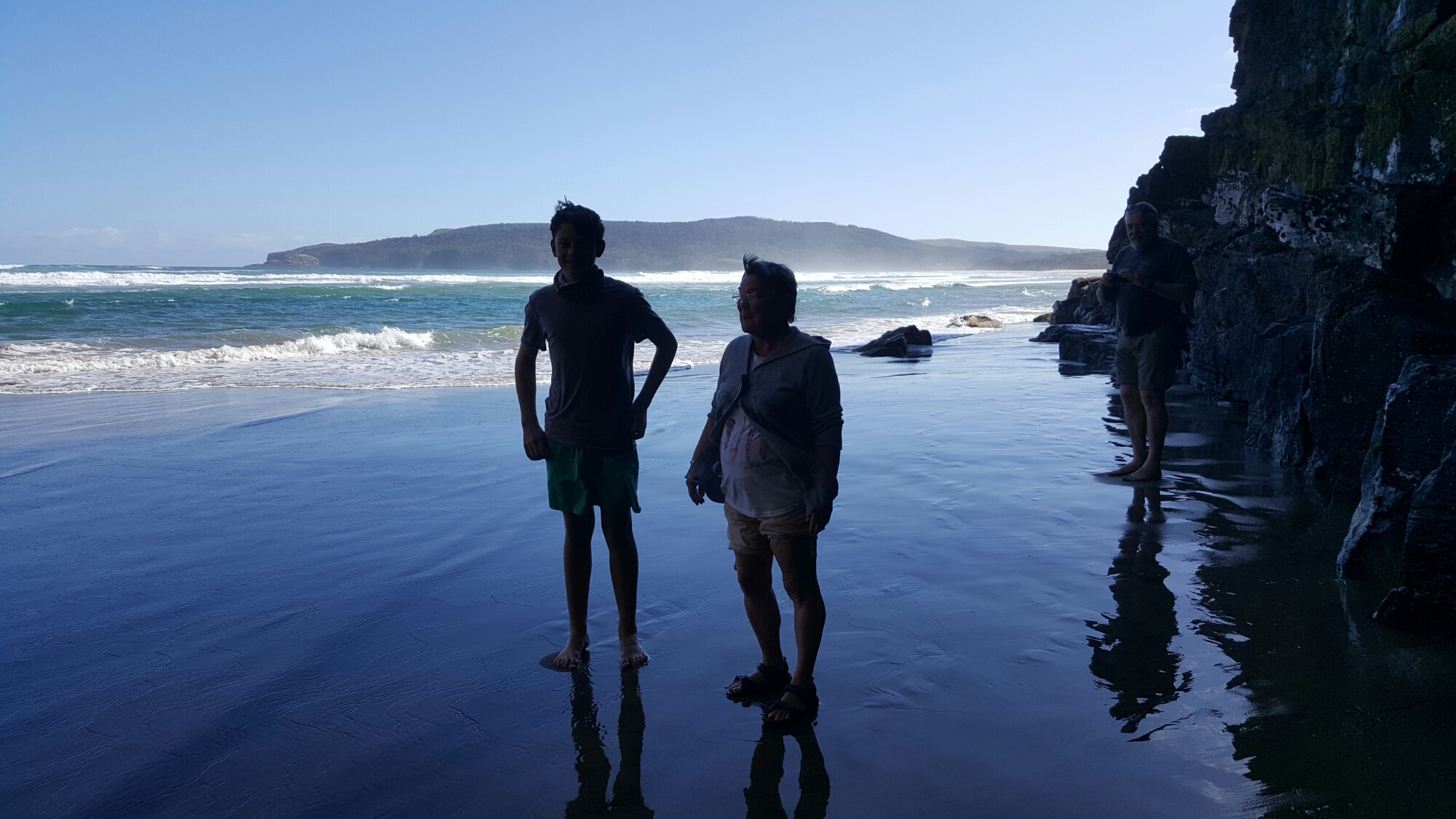 Along with tourists from all over the world we hopped on rocks, dodged the waves and dashed between them to get into the cave without getting too wet.  By now the sky was blue and the sun was out so the views out of the majestic archway were impressive.  We wandered around for ten minutes or so before getting cold and heading out. 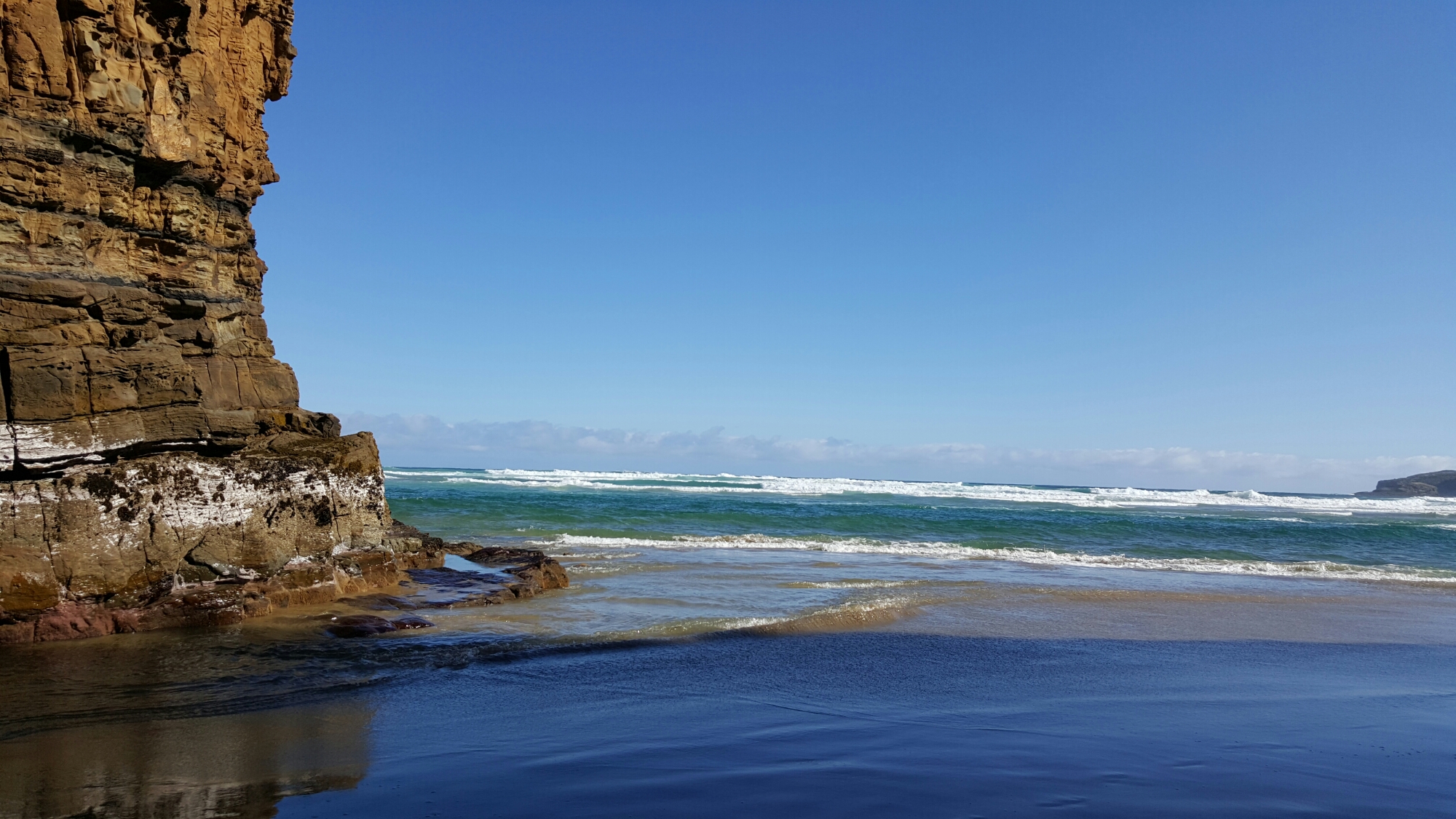 To Aonghas’ great amusement, Chris was caught by the back splash of a wave on the rock against which she was leaning and was drenched from head to toe!   Before setting out on the steep track through the bush back up to the car park Gus persuaded me to go for a swim.  Well, it has to be done, doesn’t it? Who can resist sun dappled, crashing waves?  Not me!