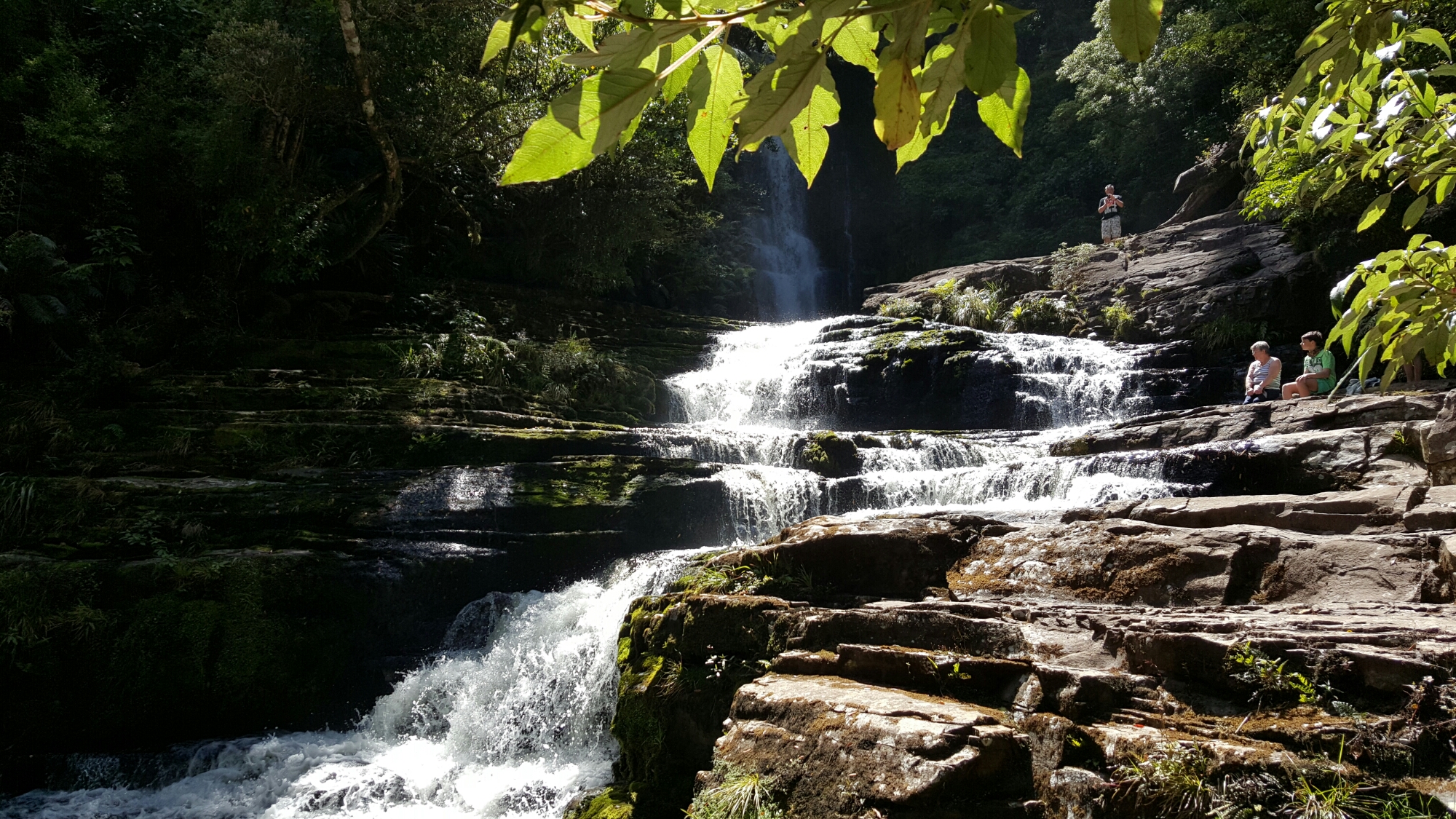 Our last day in the Catlins dawned sunnier than expected and so after a quick trip to McLean Falls and Lake Wilkie we headed to Tautuku beach.  McLean Falls are stunning although the morning sun made it difficult to photograph.  Once again Gus and I had fun clambering over stream boulders to get different shots of the three parts of the falls.  Definitely worth the climb to get to the top. 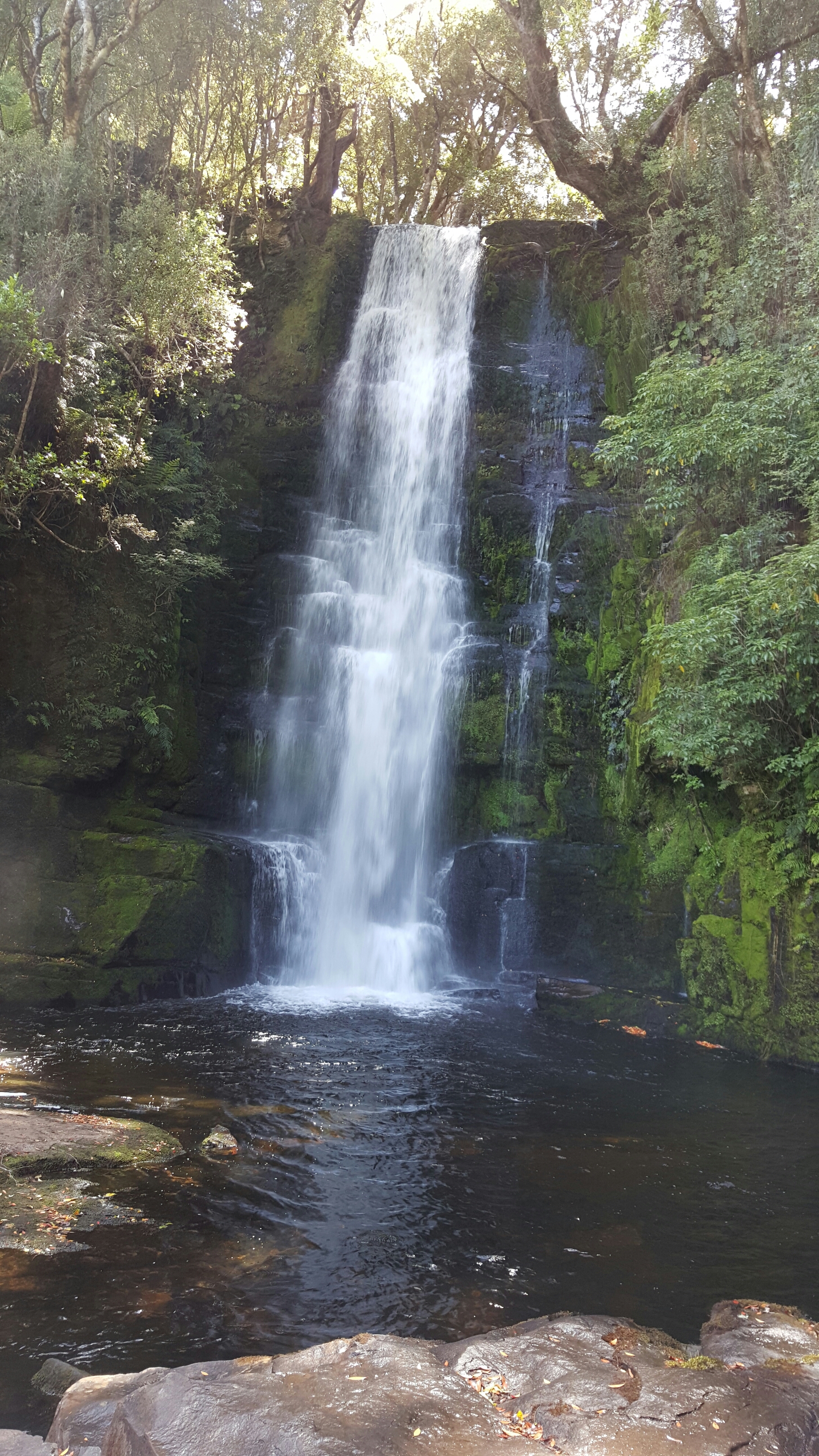 Lake Wilkie is a tiny lake in the bush,  a tranquil spot where you can take a breath and just savour the beauty.  Dragonflies hummed all around us at the lake edge and the birdsong which has been a real feature of our walks in the Catlins was delightful. 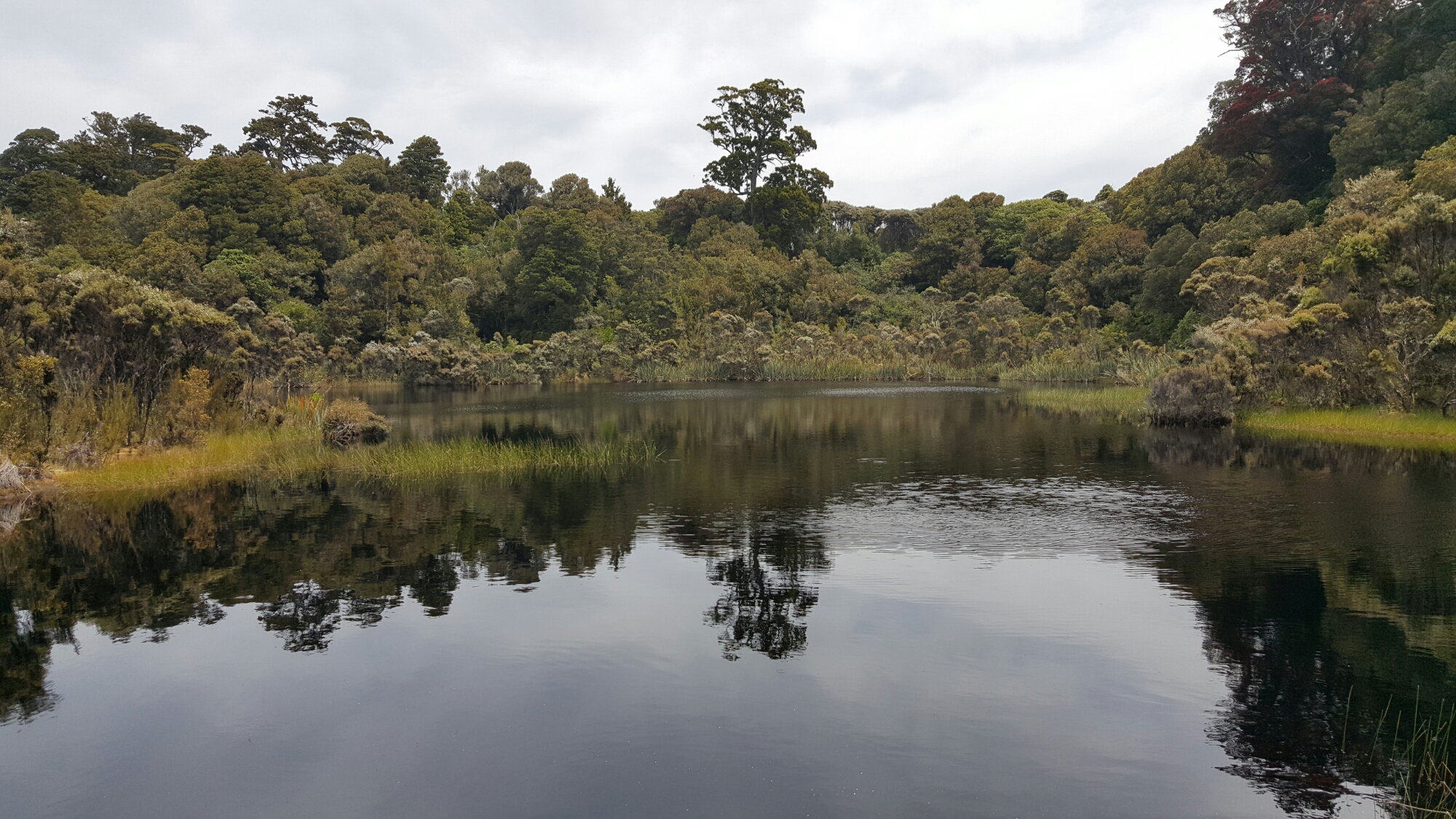 At the beach the water was cool but being ‘hard’ northerners (of England) we could hack it! After all I was brought up on North Sea holidays in Filey and Scarborough! 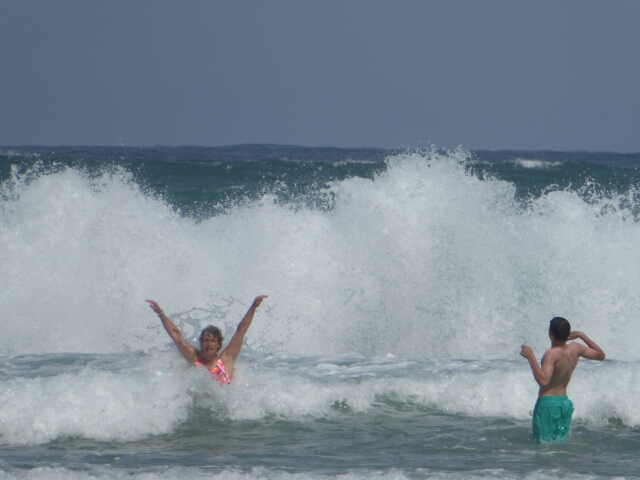 We headed to the Whistling Frog for tea – great fish and chips but mediocre beer which was a shame since it was a local brew. 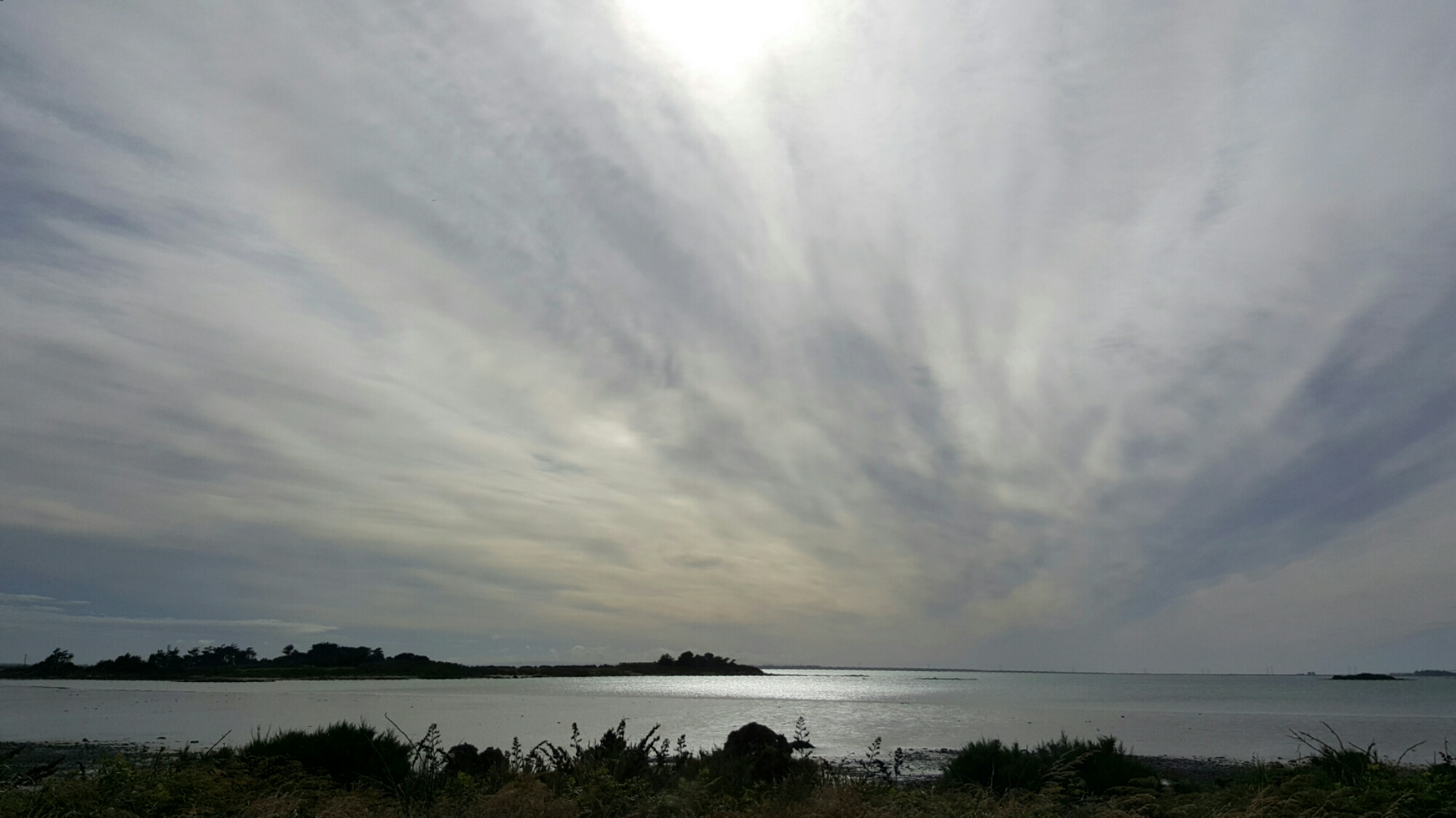 The journey to Bluff was uneventful although mention must be made of the weather which was still surprisingly and unexpectedly good.  The continuing sunshine and lack of wind made for a relatively smooth crossing of the Foveaux Strait and brilliant views of Stewart Island. 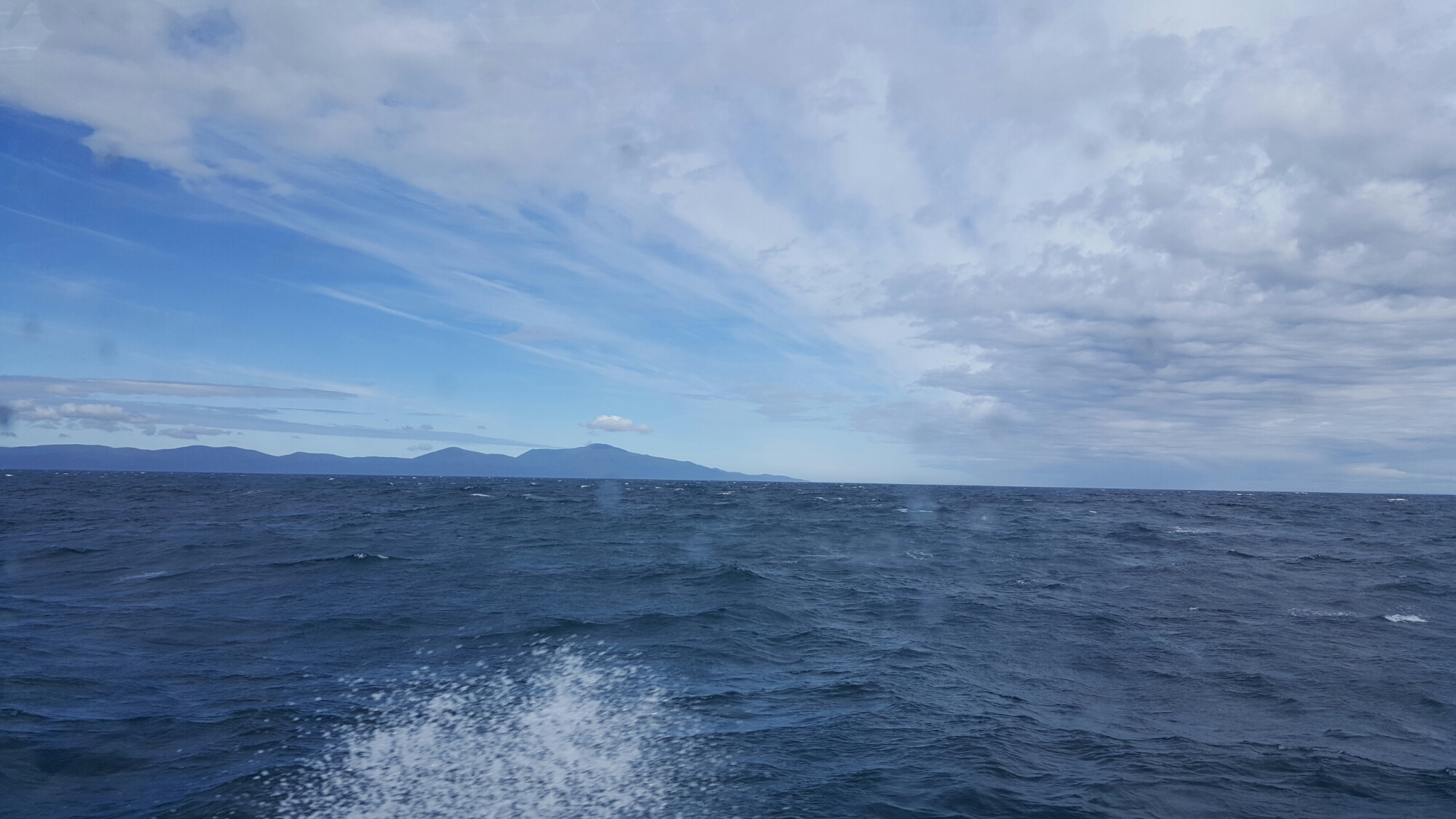 Mona meet us at Oban with the Rav4, our vehicle for the week which comes with the cottage.  Ringaringa Cottage is not really a cottage but a tidy two bedroom 1970s house.  What makes it is its location overlooking Ringaringa Beach with a view out to Native Island and a conservatory which is an absolute suntrap. 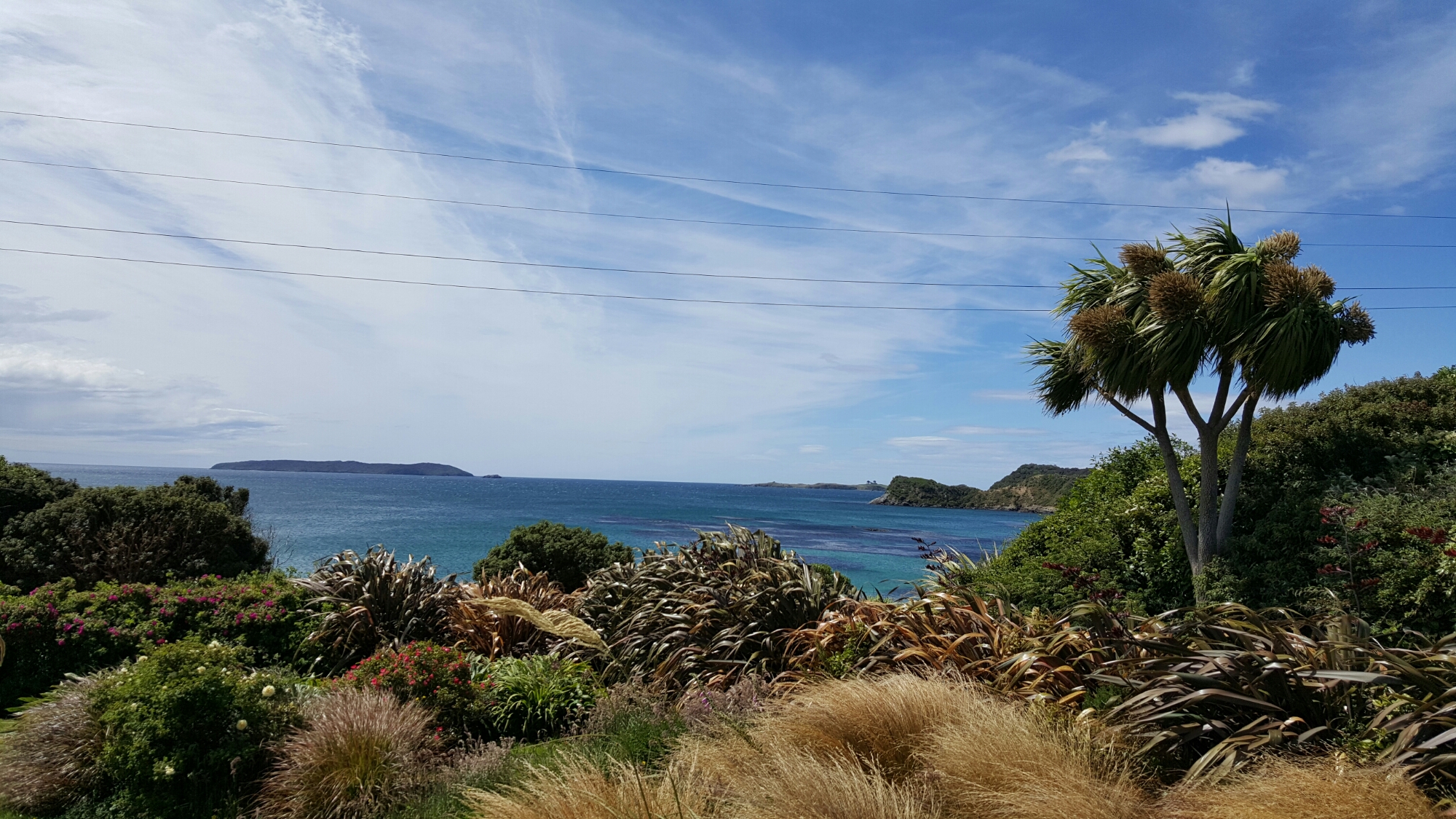 It is also home to a host of native birds and we have already been visited by Tui, Kereru, Kaka, as well as thrushes, sparrows and other small birds we can’t name! 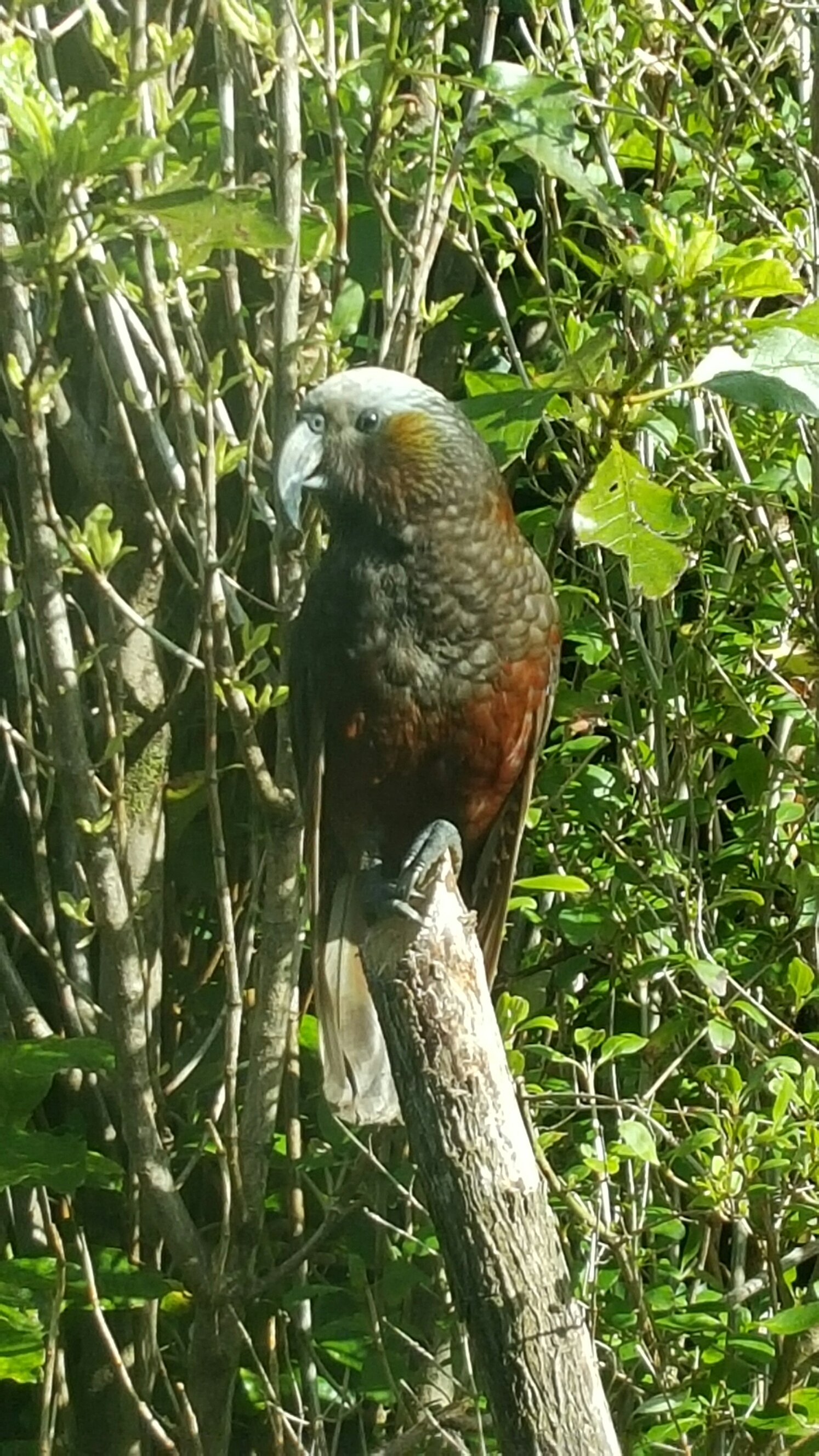 A short but steep walk takes us down the crumbling cliff to the beach. For a while we watched the seagulls surfing on the waves as they rolled gently in on the shallow beach, then we wandered along accompanied by the incessant sqwarking of an Oyster Catcher. We thought he was protecting a mate and a nest so walked past quickly aiming for the rocky point as we had been told we could get right round to the next bay. 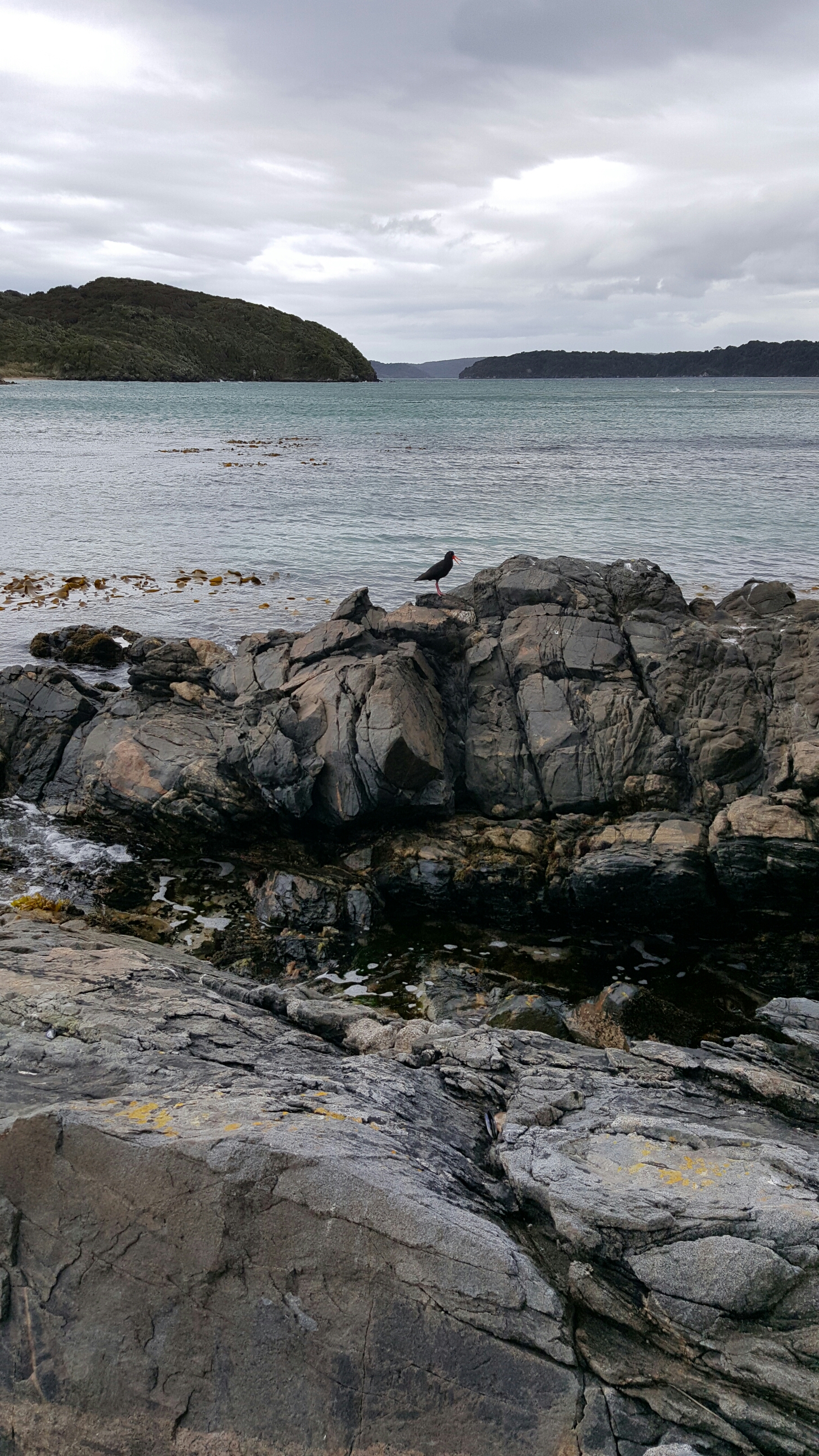 However, he flew ahead still shouting at us, then he was joined by his mate and we decided that maybe retreat was the advisable course of action – I certainly didn’tfancy beingon the receiving end of those long, sharp orange beaks!
Conscious that we may not have any sun given the bleak forecast,  Gus and I went for a swim.  I love the clarity of the water in New Zealand, it is impossible to resist plunging in however cold it may be! 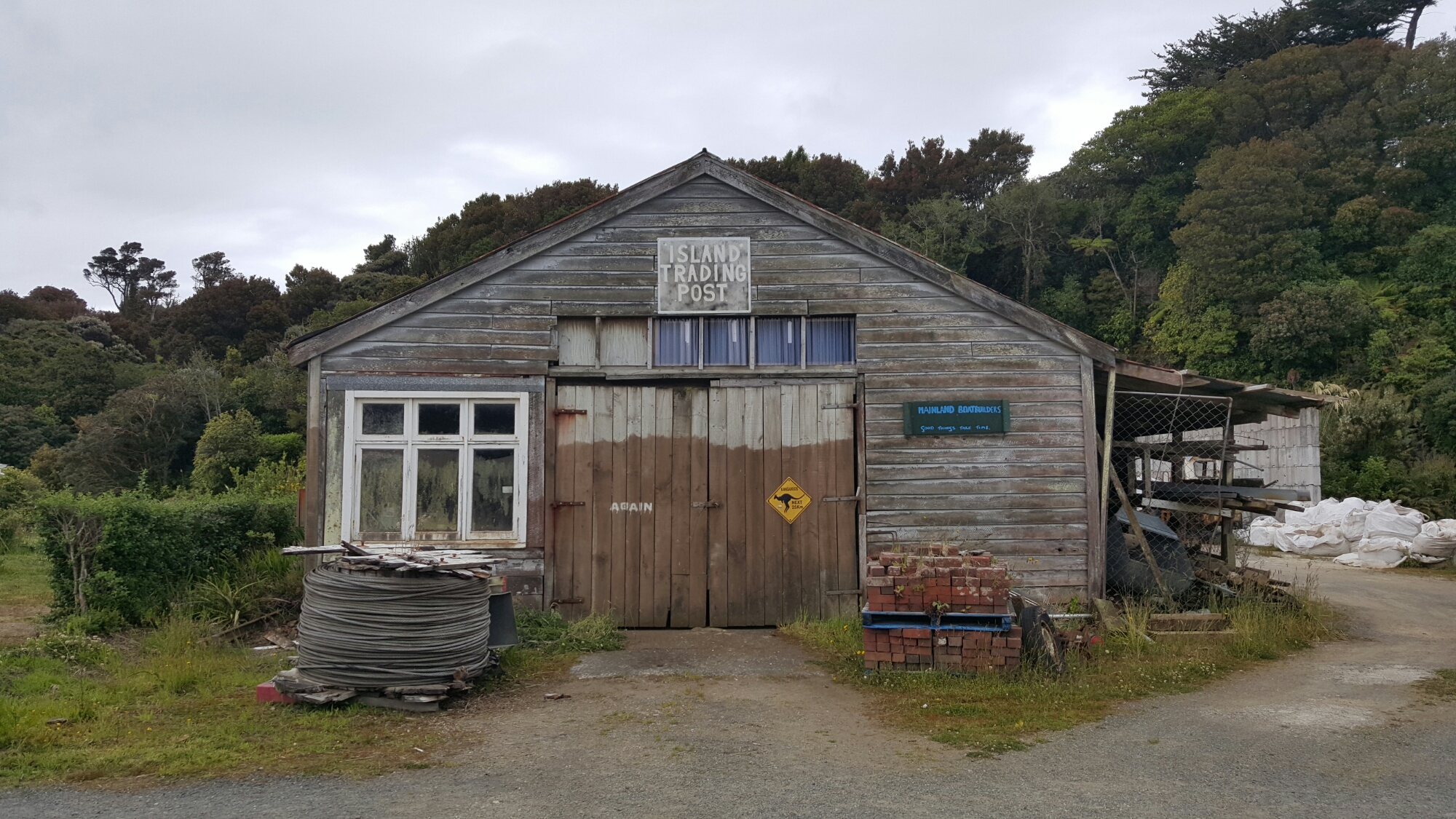 After a trip into Oban for some essential supplies (beer and wine) and a recce of the pub and the DOC centre we headed home to light the stove and have tea. Oban, like it’s namesake in Scotland is a port and is the access point to the mainland. It is a busy wee place with a well-stocked general store, a pub, a couple of restaurants, an outdoor clothes shop (merino wear – an essential fabric for the changeable weather and especially useful for those of us who forgot their thermal leggings!) boat supplies, ferry terminal and places offering guided tours of the area. 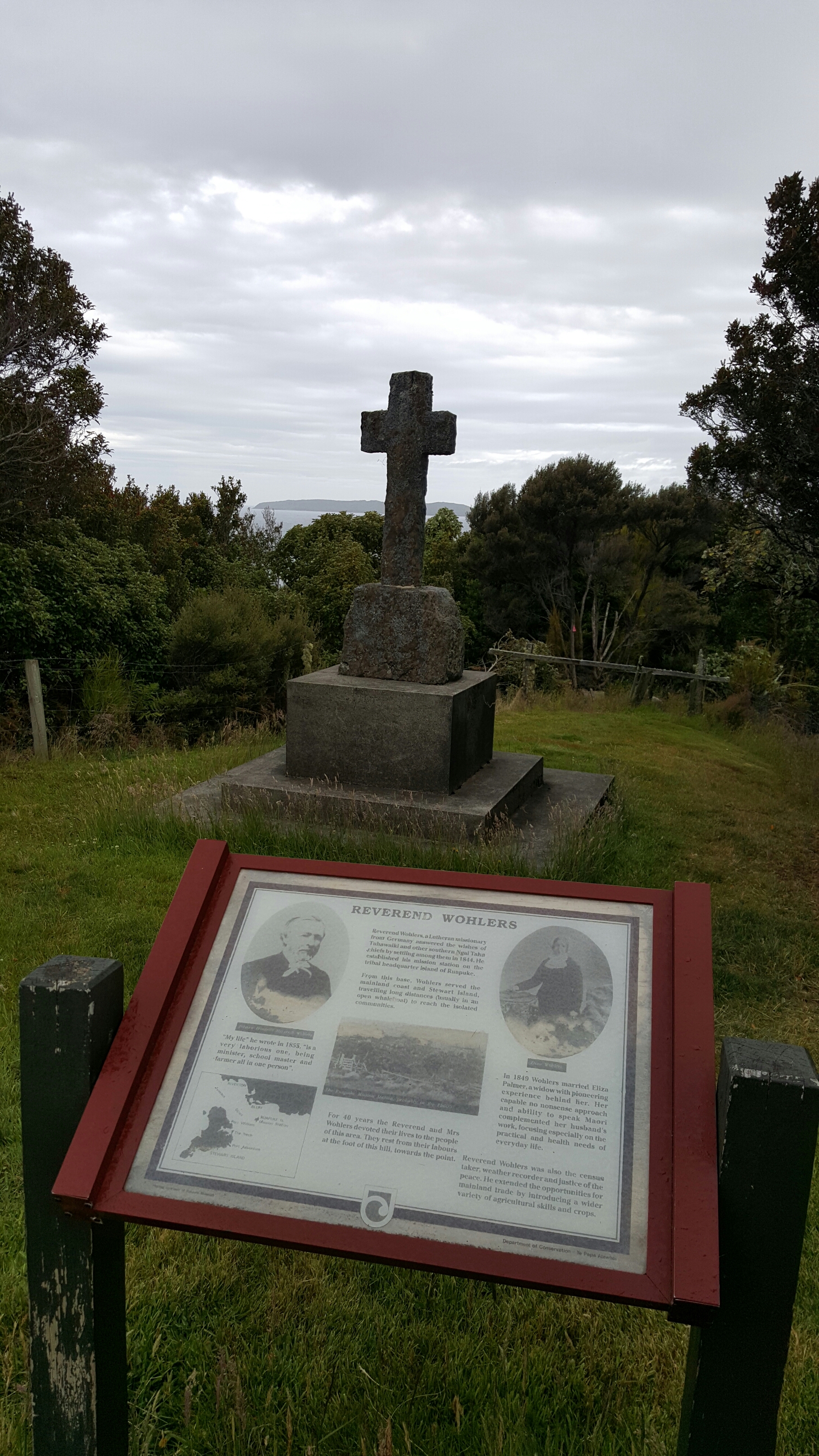 The forecast,  as I already said was bleak – rain, wind, more rain, gales, rain! You get the idea… So since it was a fine evening,  Nigel and I went out for a short evening walk to Wohler’s Monument.  It afforded us a fantastic view across the bays and up close sightings of Kereru and Tui. 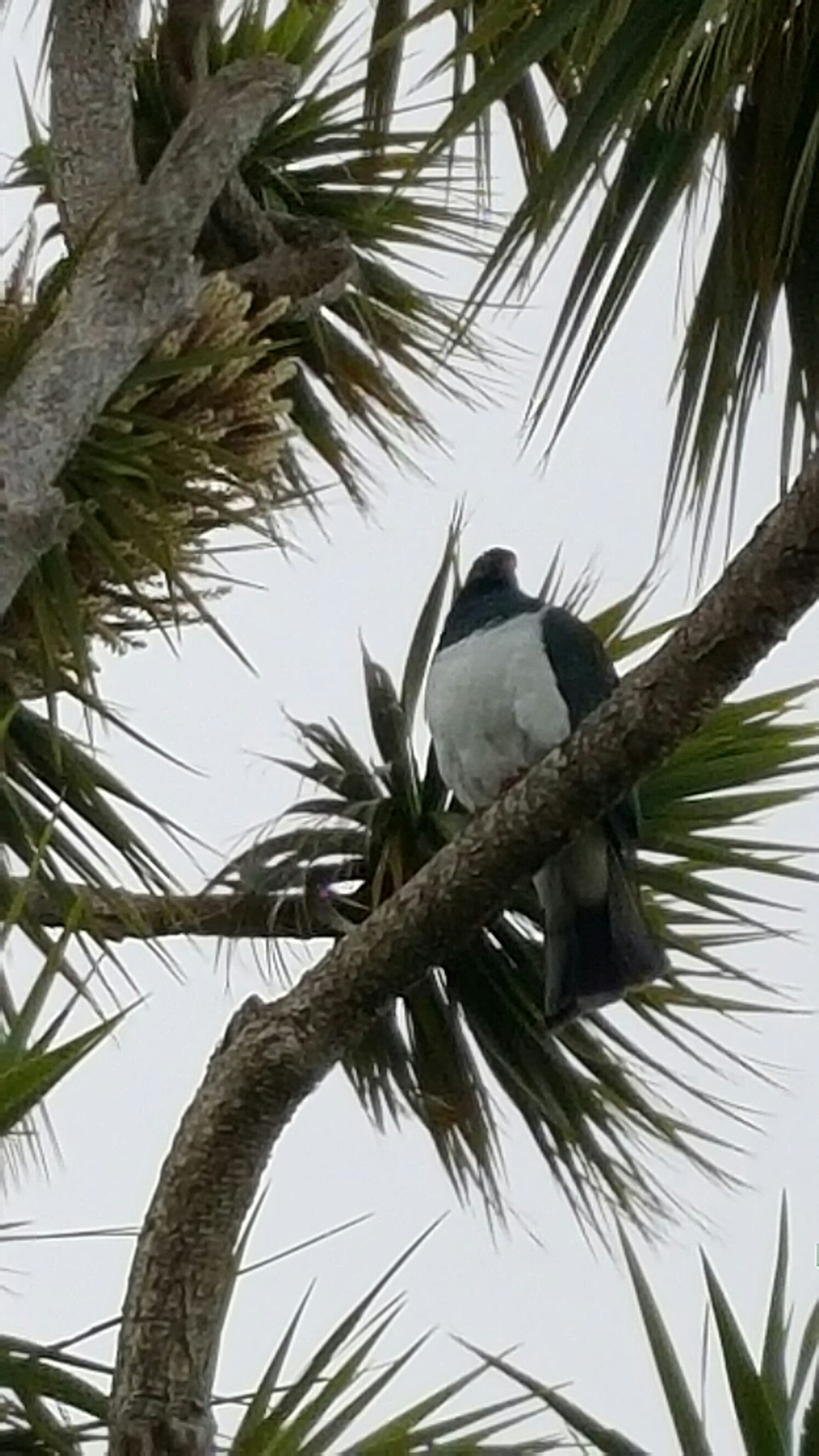