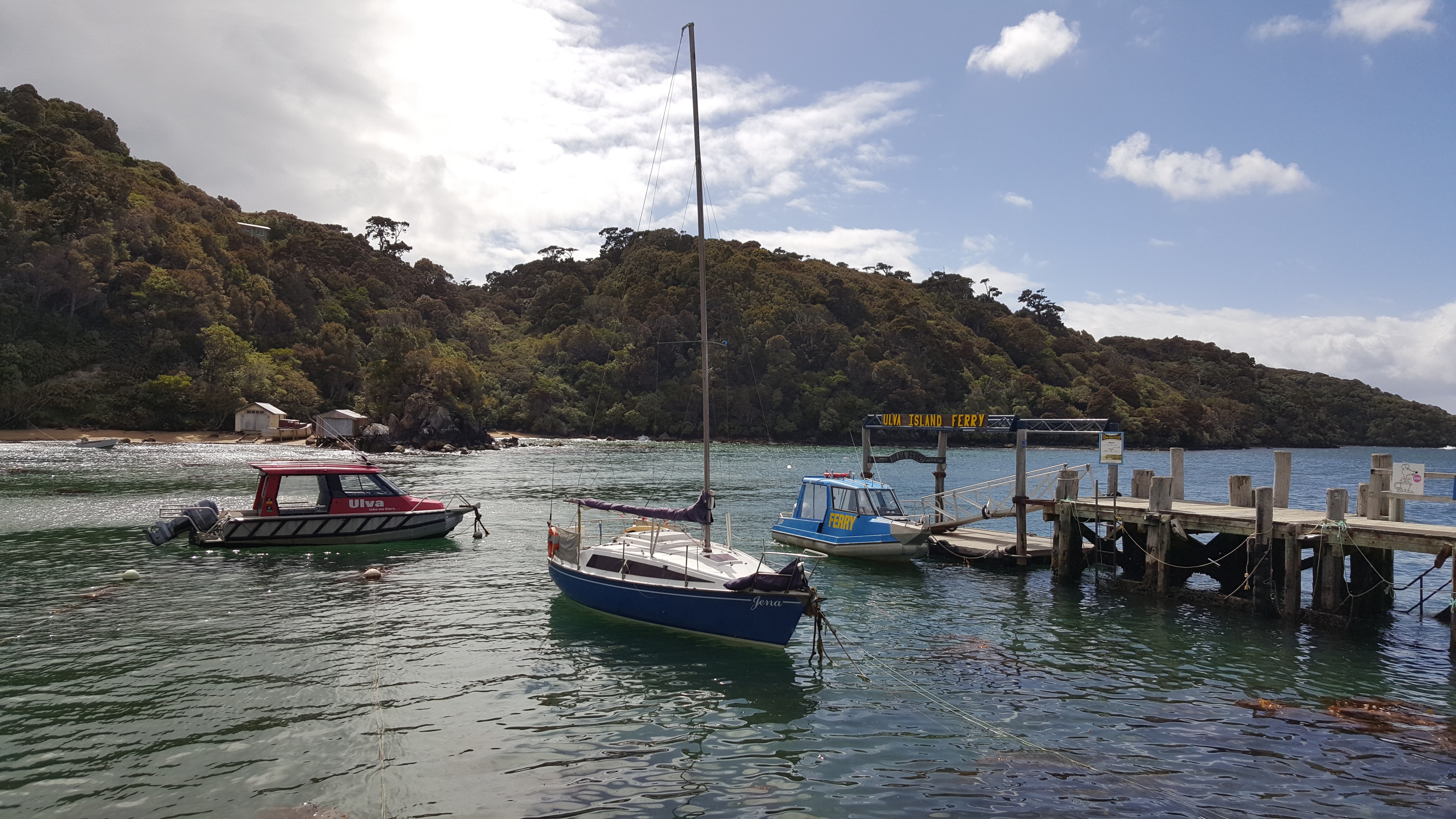 Ulva Island is an unmissable trip if you are on Stewart Island.  We crossed from Golden Bay on the Ulva Island Ferry – a small 8 seater motor boat, fortunately with a zip up canopy to protect us from the wind and spray. We were handed our boarding passes by Anita – an elegant, tall lady wearing a long, flowing, green coat and wooden clogs; Mutton Scrub Leaves with the words Ulva Island Ferry handwritten on them. Mutton Scrub leaves were used as postcards and could legally be sent by mail until the 1970s in New Zealand. 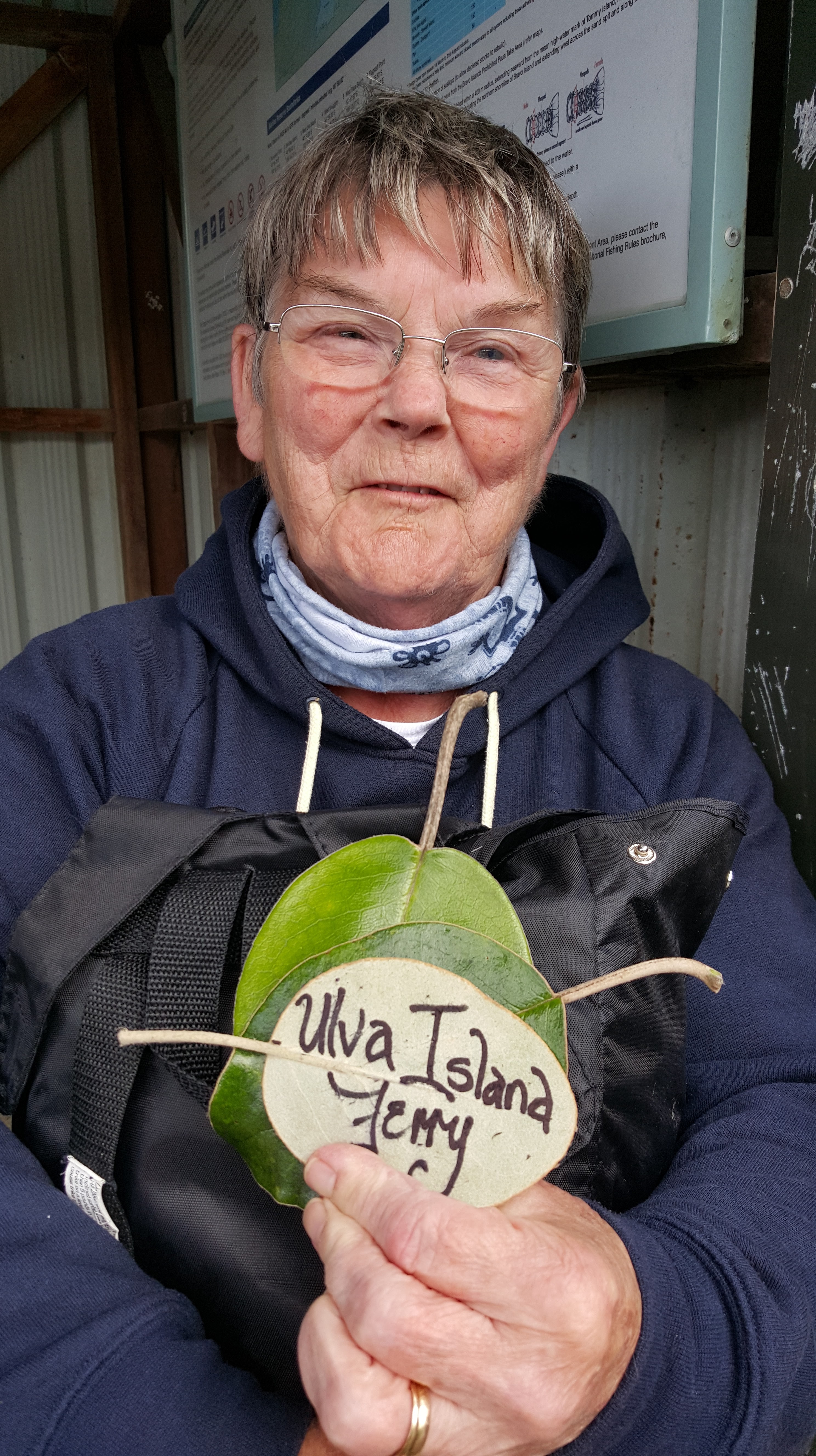 The crossing only takes 5 minutes and going over was a bit bumpy but by the time we came back at 4.30pm the wind had got up and there was a two metre swell and 85kmp winds! Quite exciting and just a little scary! 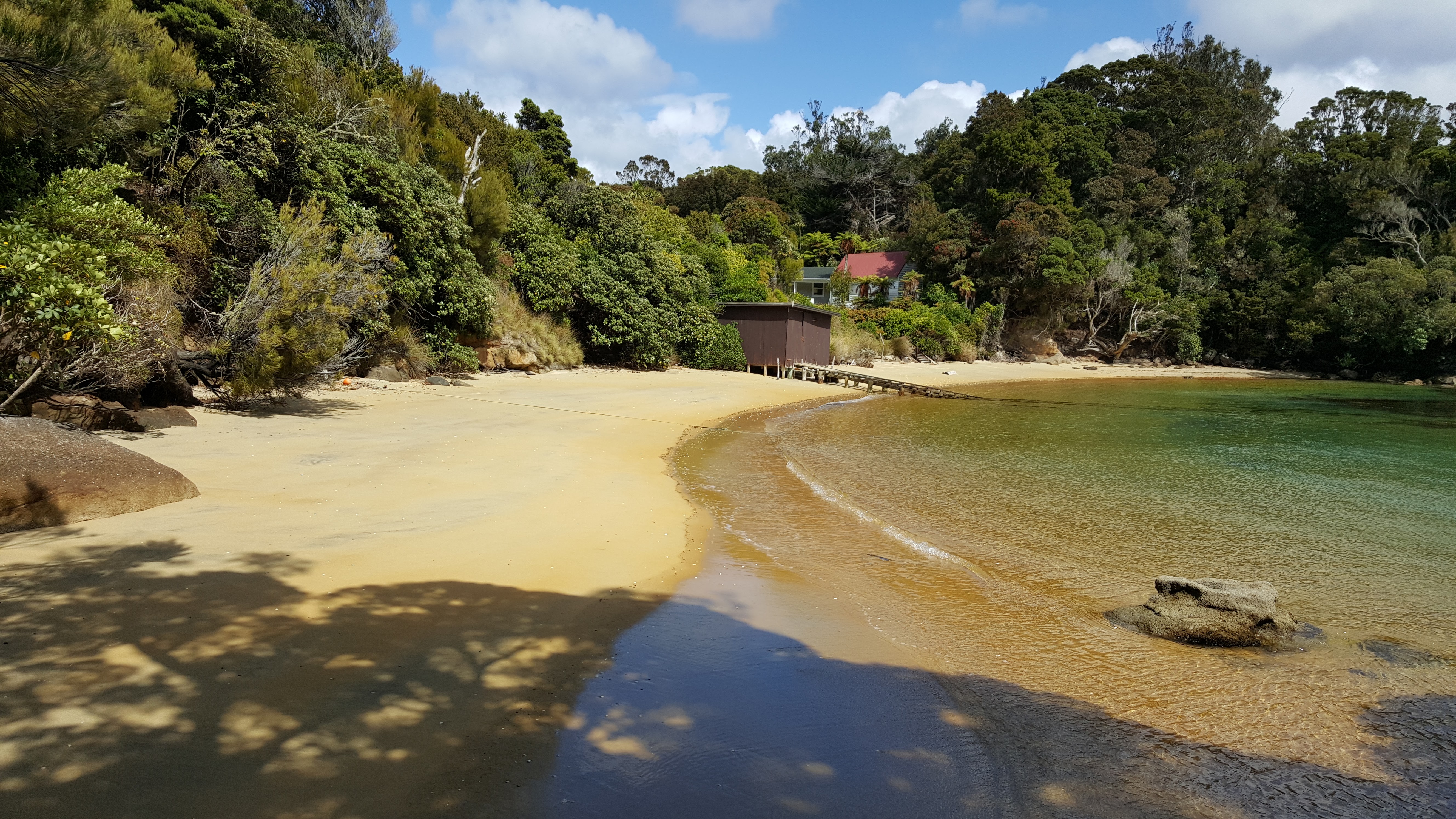 We landed at Post Office Bay, site of the first Post Office in the Stewart Island region established in 1872 by Charles Traill and immediately saw the flash of green Kakariki fly across the bay and into the bush.  The trail from there to Sydney Cove, to Boulder Bay and then back to the wharf is only 4km and we did initially wonder how we would make it last four hours!   No need to have worried, we even ended up rushing the last section to get back to the wharf in time for the ferry. 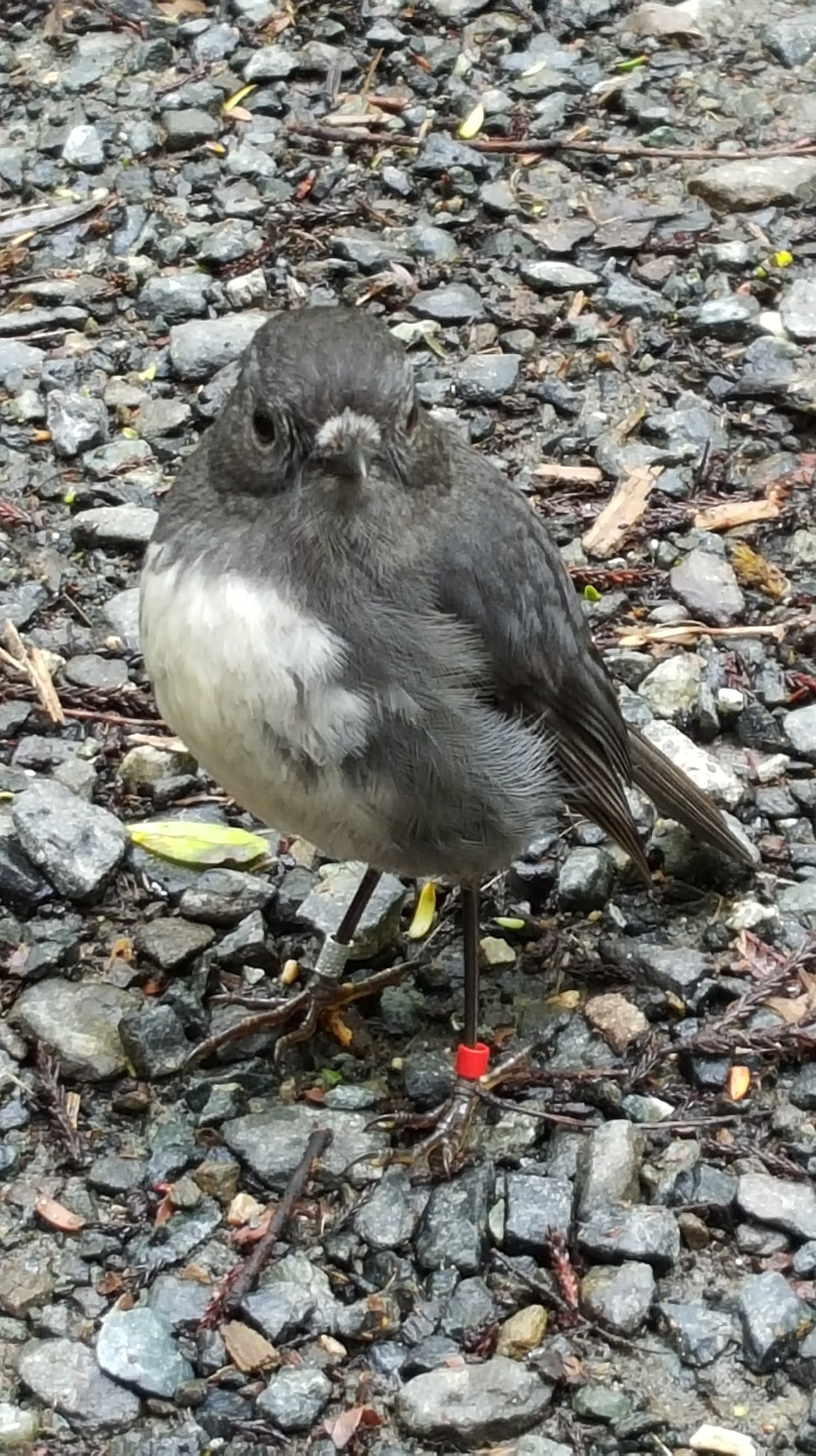 I think what struck us most was the richness of the birdsong; there was rarely a time when the forest was silent.  The glossy green and black plumage of the Tui as they swooped across the path was a constant.  One of my favourite birds it was wonderful to be able to watch them and listen to their songs. We were very excited when a wee grey bird hopped fearlessly on the path when we sat down on a bench to have a biscuit.  It posed happily for us as we took photos and identified it as a Stewart Island Robin.   Aonghas decided it looked like a Brutus and so the game of naming Stewart Island Robins began!  There were plenty more – cheeky little things, they followed us along the path and every time we sat down they would come begging for crumbs.

The bush too was lush and green. Bright green ferns, spiky Lancewood, droopy Rimu, Manuka and so many more plants and trees of every shade of green, brown and yellow camouflaged the birds which we could hear but not see.  Bright red Rata flowers carpeted the forest floor at times and lichens and cushiony mosses enriched the fallen logs and leaves. 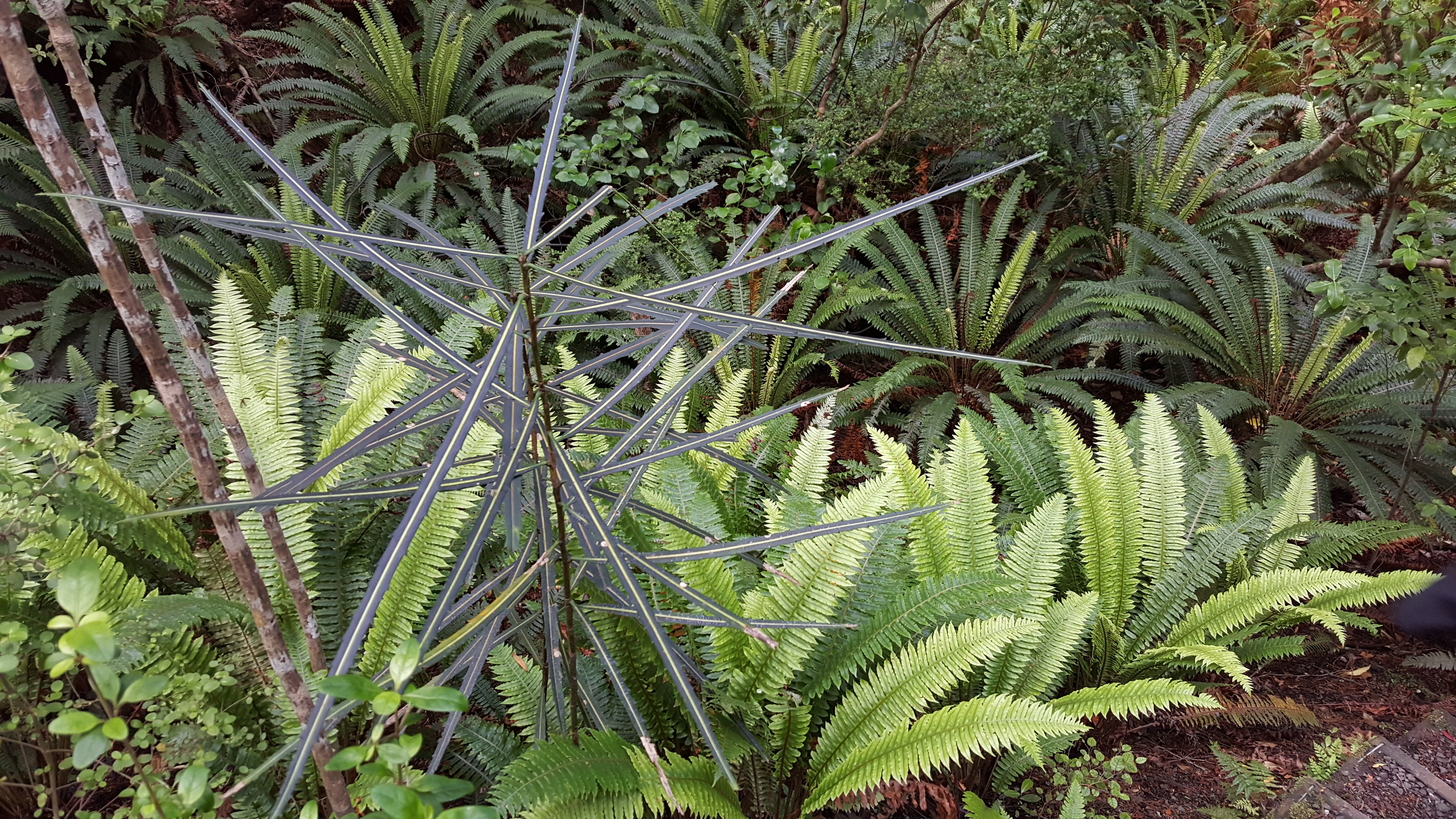 As well as the Robins, Tomtits, Bellbirds and Yellow Heads stayed around long enough and close enough as they flitted around in the trees for us to see them and positively identify them.  We may have seen Grey Warblers and Brown Creepers but can’t be sure as they move so fast through the leafy branches in the bush. 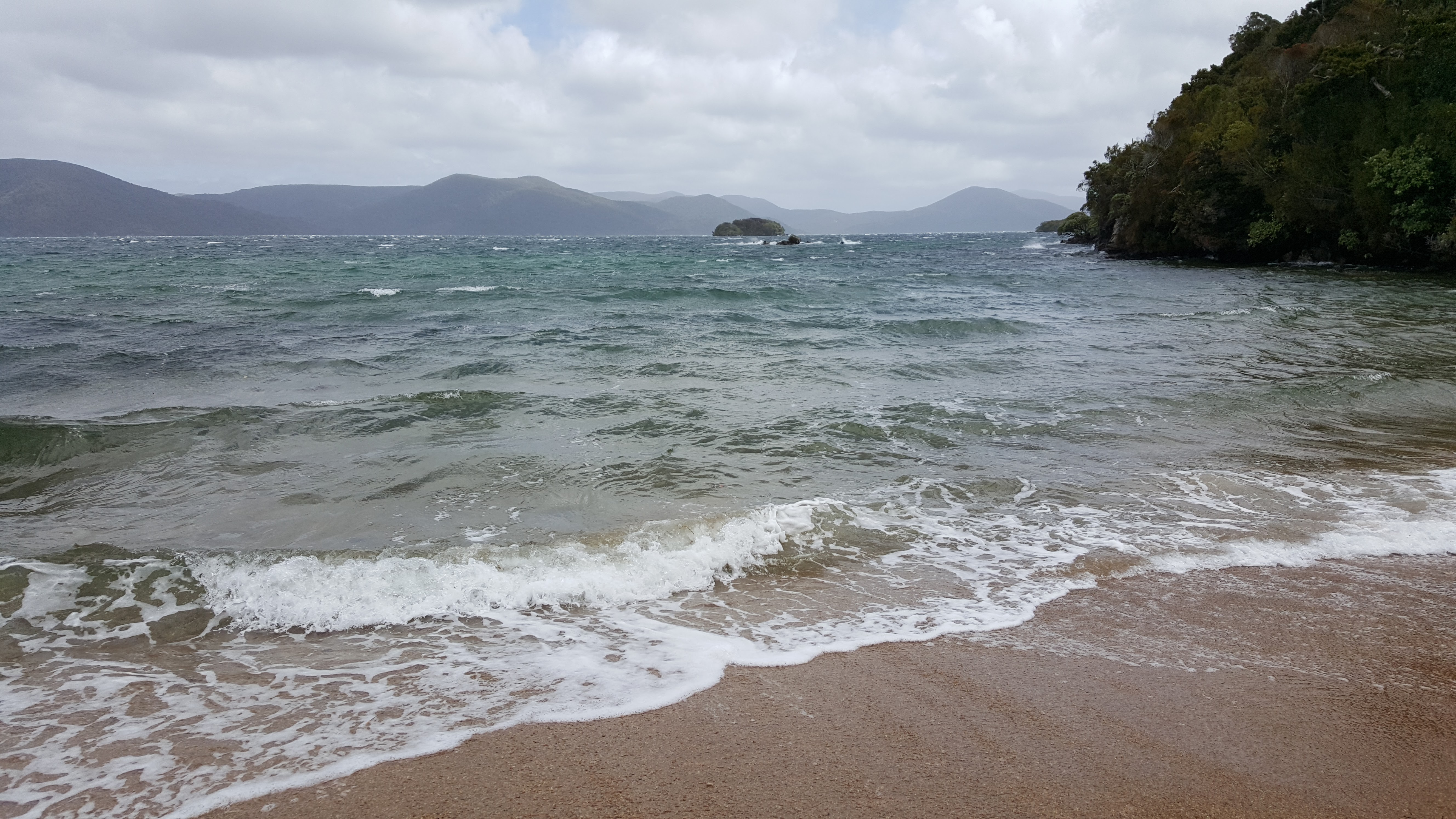 The telltale soft thudding of Kereru as they fly through the bush was also a constant and we saw them often perched statue-like on branches.  Their white “apron” and metallic green head makes them easy to pick out.

We heard the noisy chattering of more Kakariki but didn’t see any more but we did see several Kaka majestically seated on high branches carrying on their conversations.  I love the way that their claws are almost prehensile as they walk along the branches and then hang upside down to reach food.  Their habit of stretching a leg and a wing out fascinated us too. 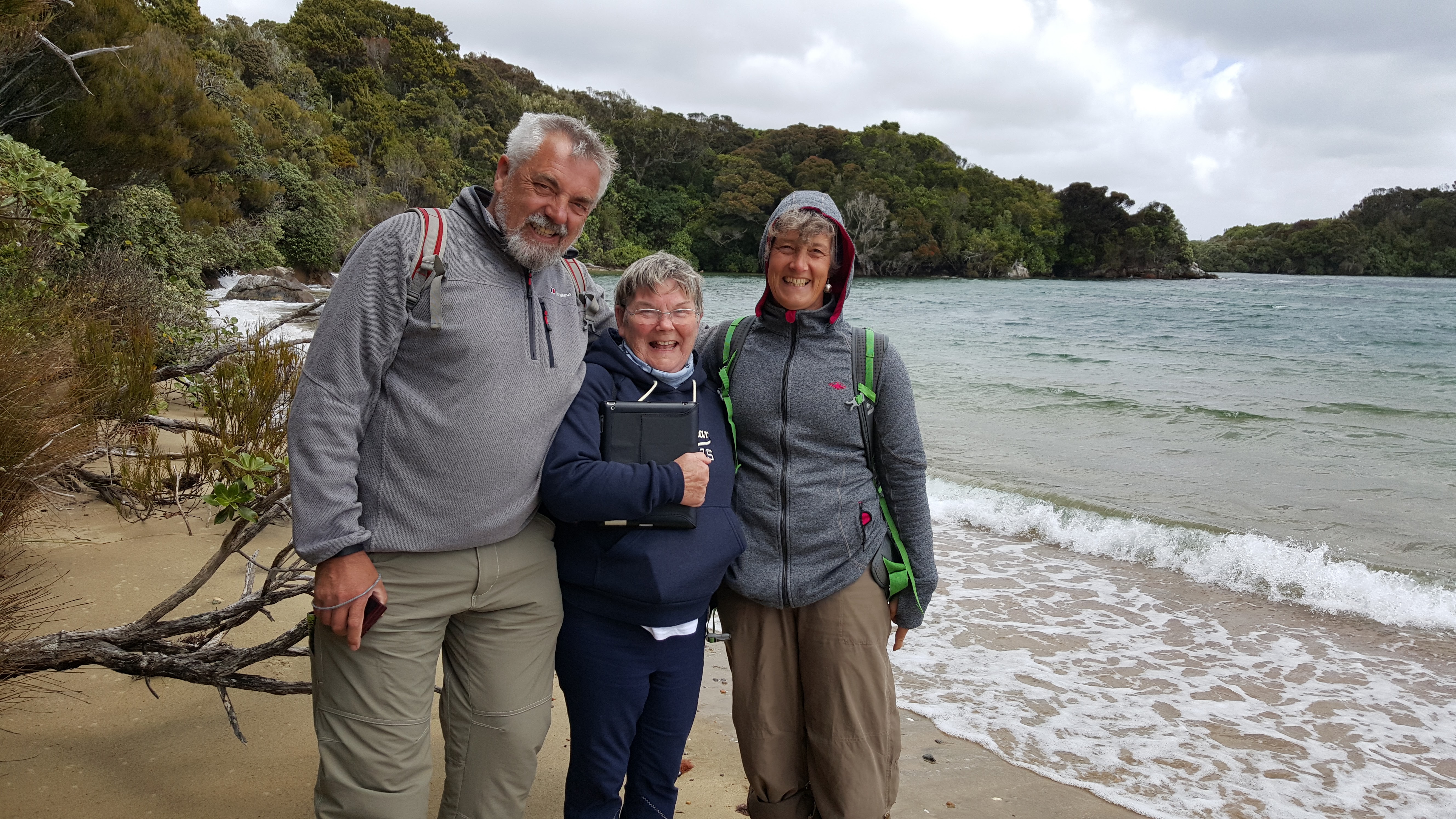 The sections of the walk are punctuated with visits to the bays.  Here we were subject to the onslaught of the burgeoning wind from which we were sheltered in the forest. An incoming tide stymied our plan to have our picnic lunch at West End Beach although it is unlikely we would have found a spot out of the wind anyway.  As on other beaches we visited around Stewart Island, the Oyster Catchers were fiercely guarding their nests in the sand and I, for one, would not like to be on the receiving end of those long pointy beaks! So we took photos, marvelled at the wild beauty of the coastline and the crashing waves and retreated to the forest and the waiting Robins. 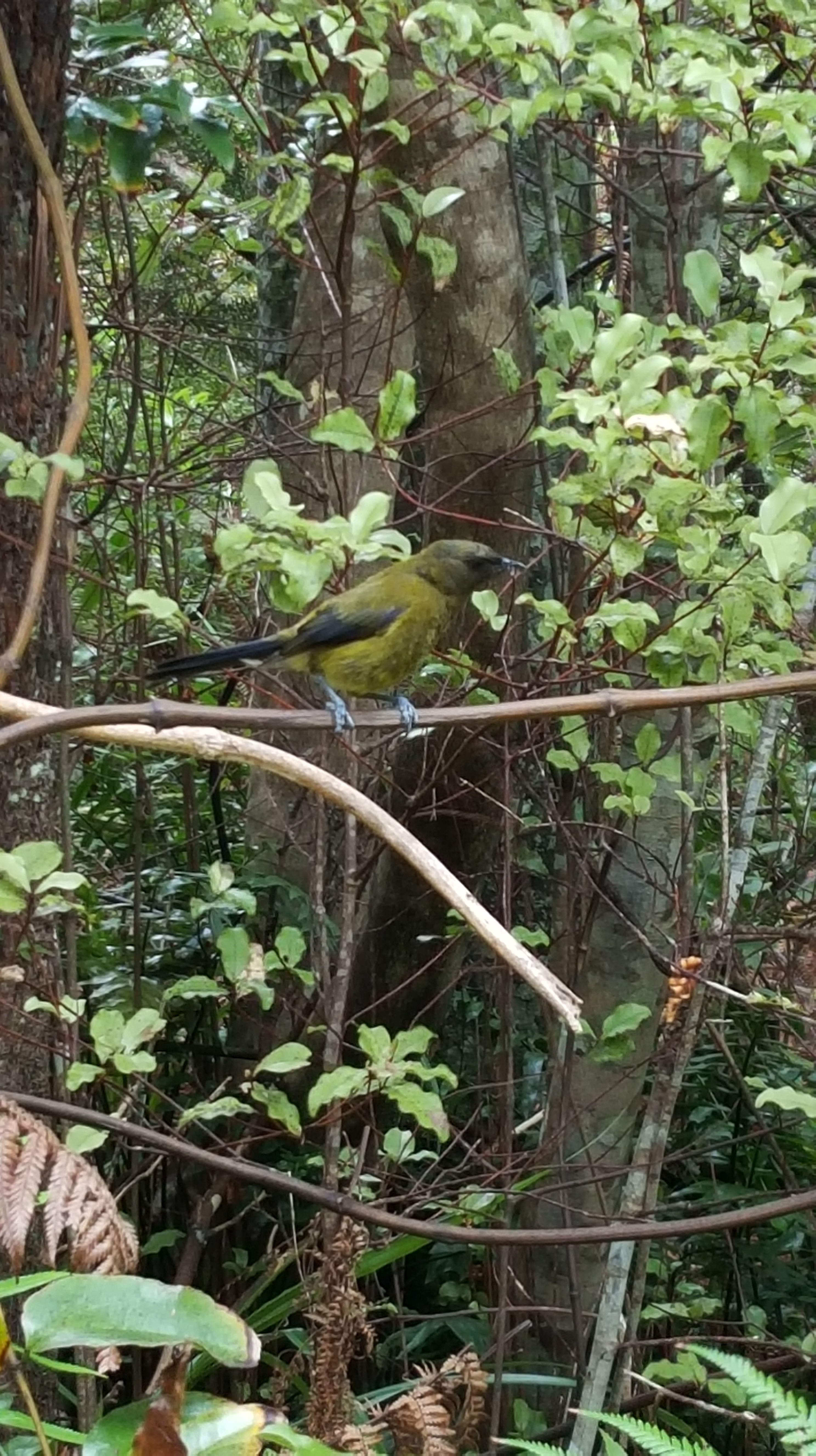 As we walked back along the track I paused to look at a bird that flew across in front of me and landed in the bush to my side. It was clearly a Bellbird and was chatting away as I tried to turn my camera on to take a photo, it flew to the next branch frantically calling. I turned around to see a Weka run out of the bush and across the path. It almost seemed as if the one was following the other as they made their way noisily through the trees, the Bellbird flying and the Weka running. Later on we saw more Weka foraging in the leafy undergrowth, and wandering across our path, seemingly unperturbed by humans.  Eagle-eyed Aonghas also spotted a baby Weka which was quickly joined by its Mum although she didn’t seem bothered about us watching.

We really were sheltered in the bush and even on the beach at Sydney Cove where we sat watching the curious, comical, synchronised dance of the Oyster Catchers we were unaware of just how strong the wind was.

The steep walk up to Flagstaff Point was done rather faster than we had planned but, amazingly, time was running out!  It was here that we were hit by the gale force of the wind – quite exhilarating. The view was spectacular out to Rakiura with white clouds scudding across the blue sky.

We had to wait at Post Office Bay – Ulva Island Ferries had clearly had a busy afternoon navigating the short stretch of water from Golden Bay as there were twenty or so people waiting to be taken home.  It was an interesting 5 minutes back with the waves, at times, coming right over the top of the plastic awning on the tiny boat!

It was a fabulous day! 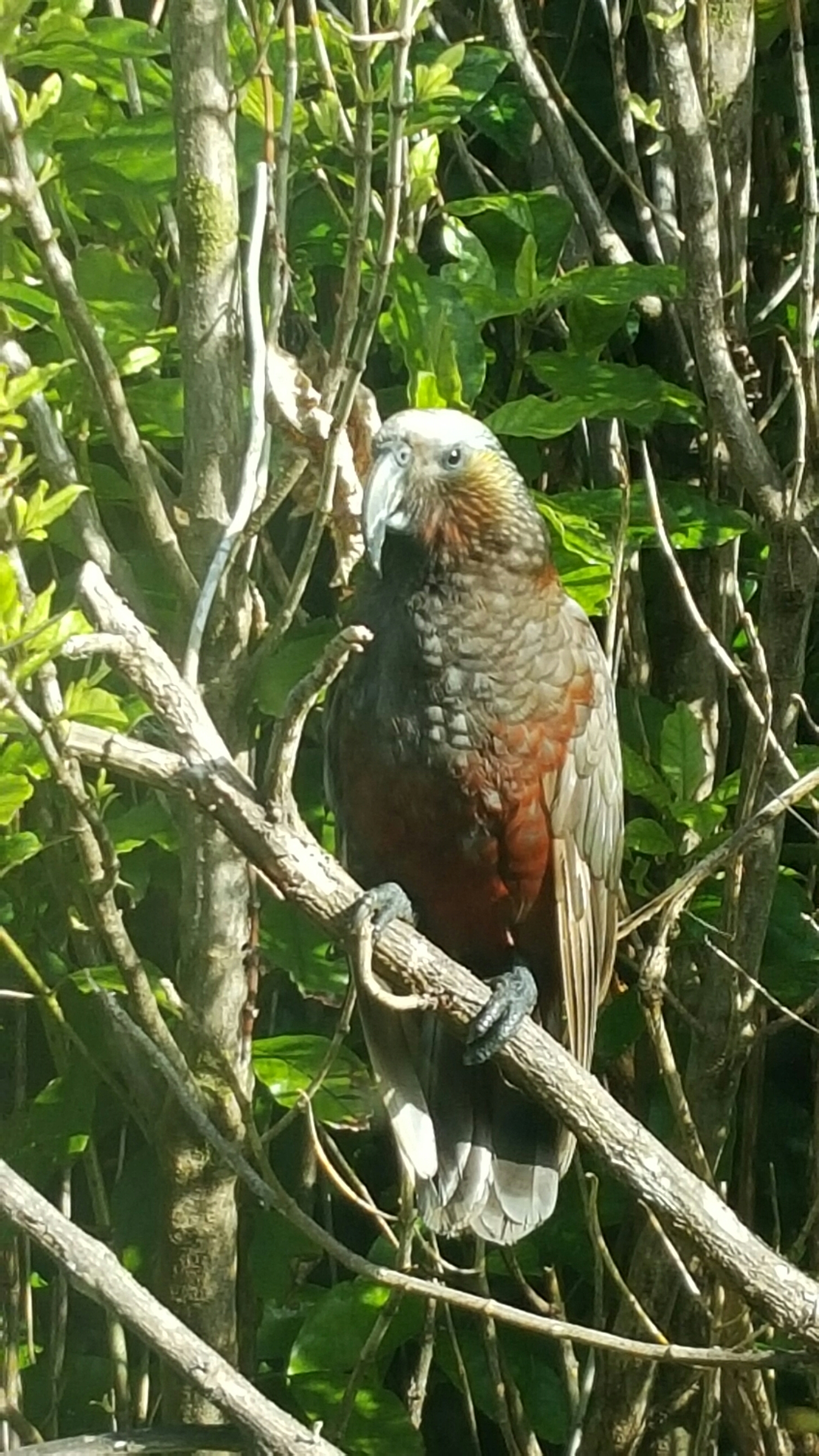 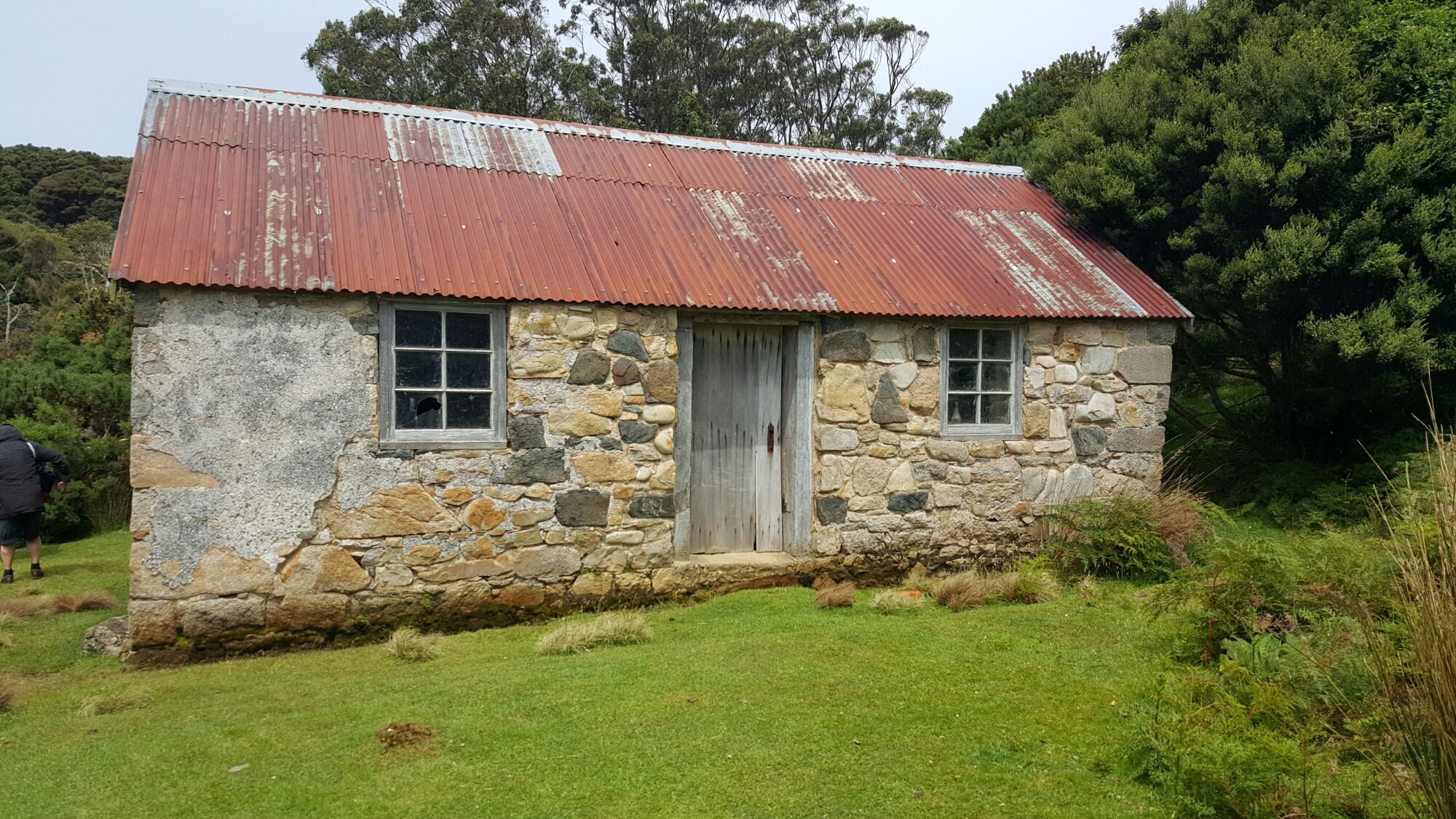 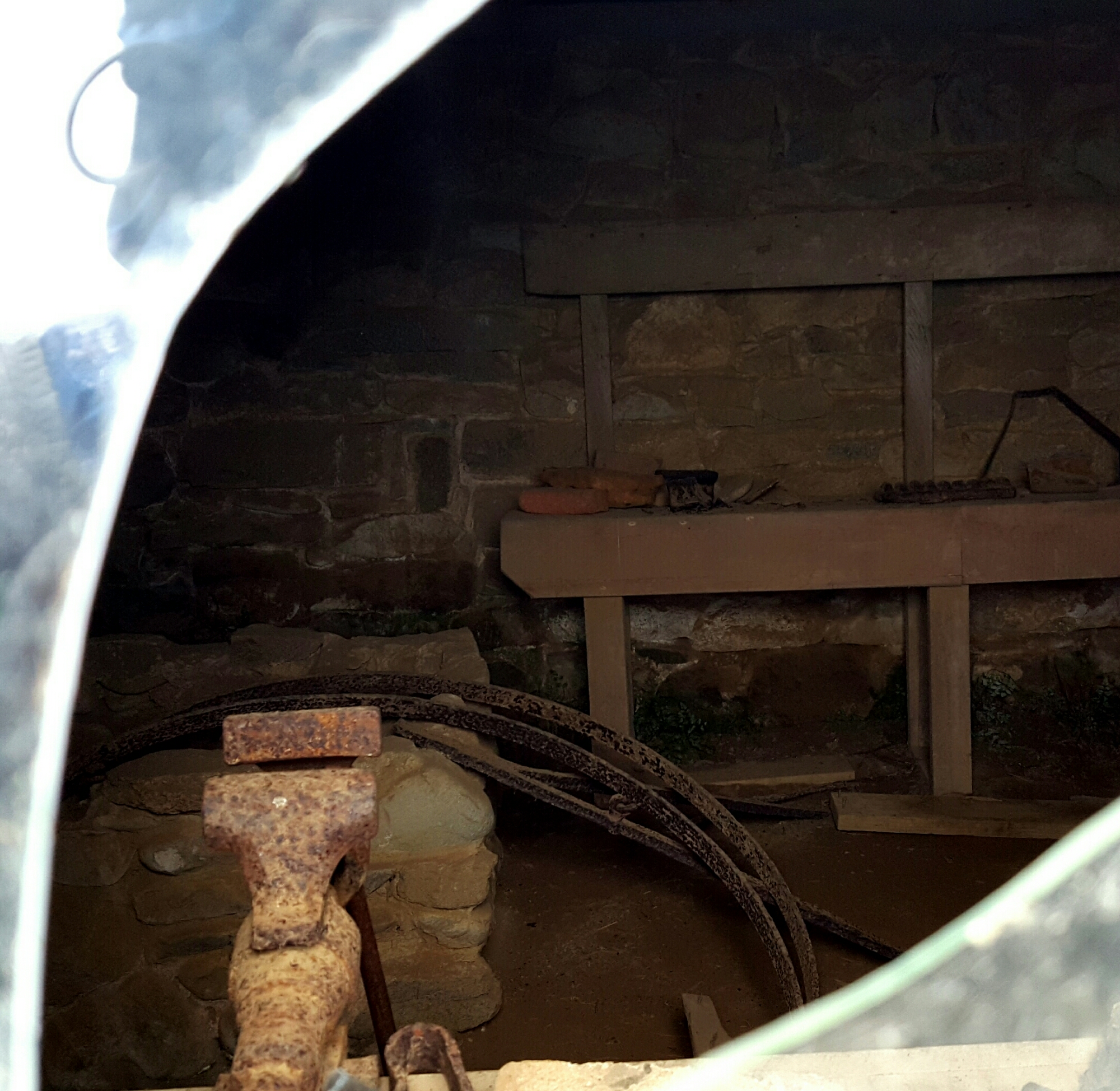 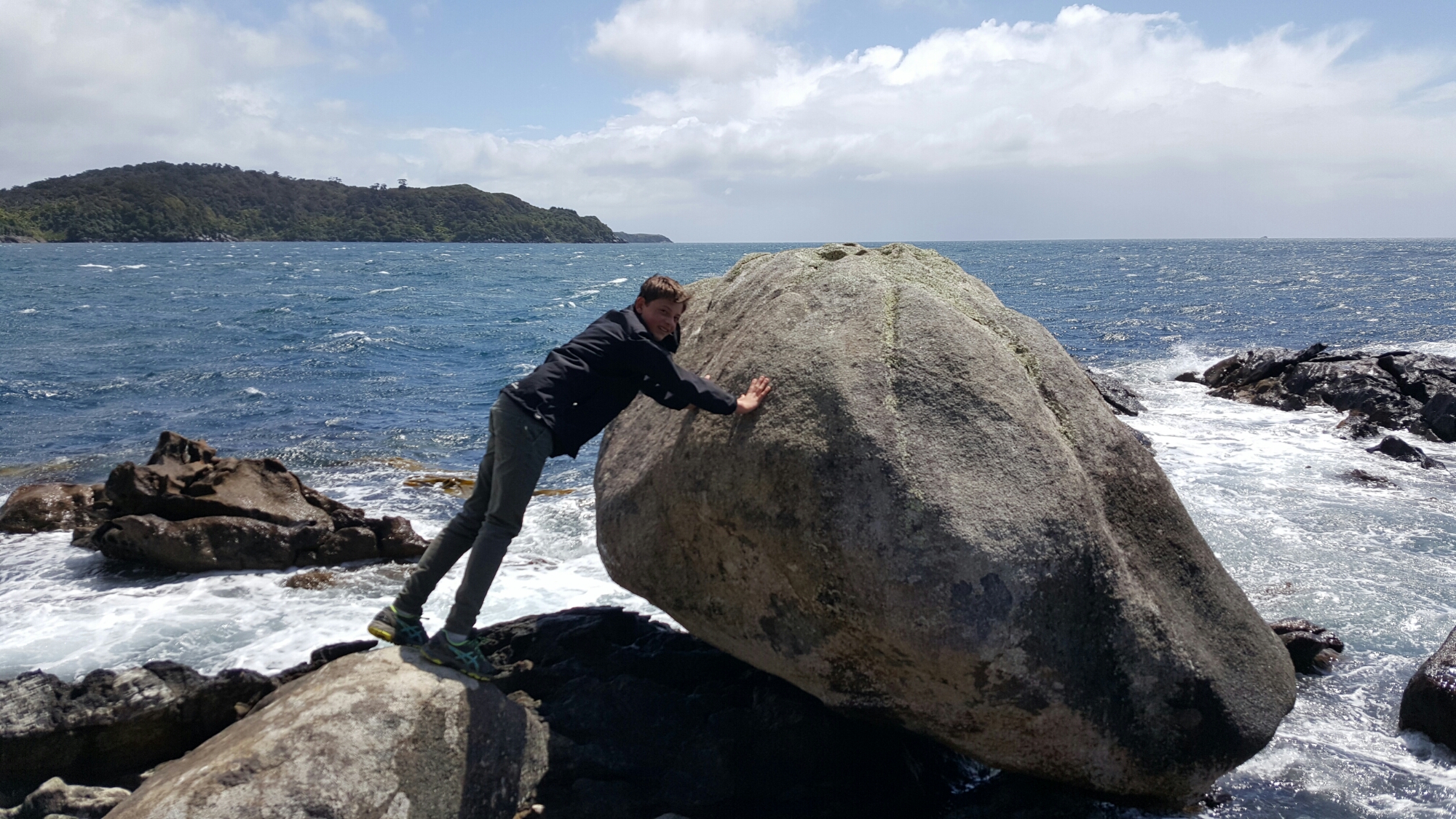 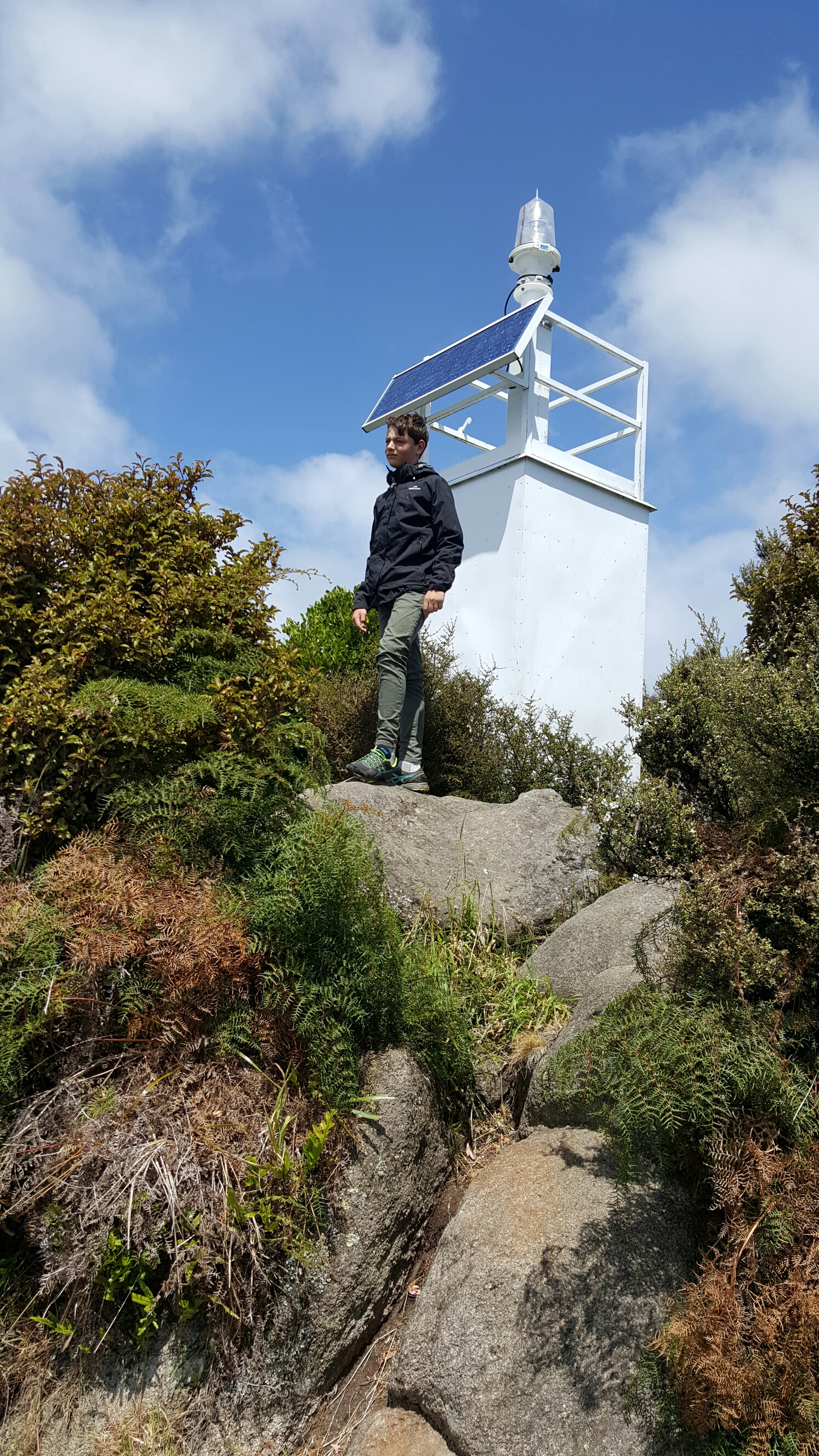 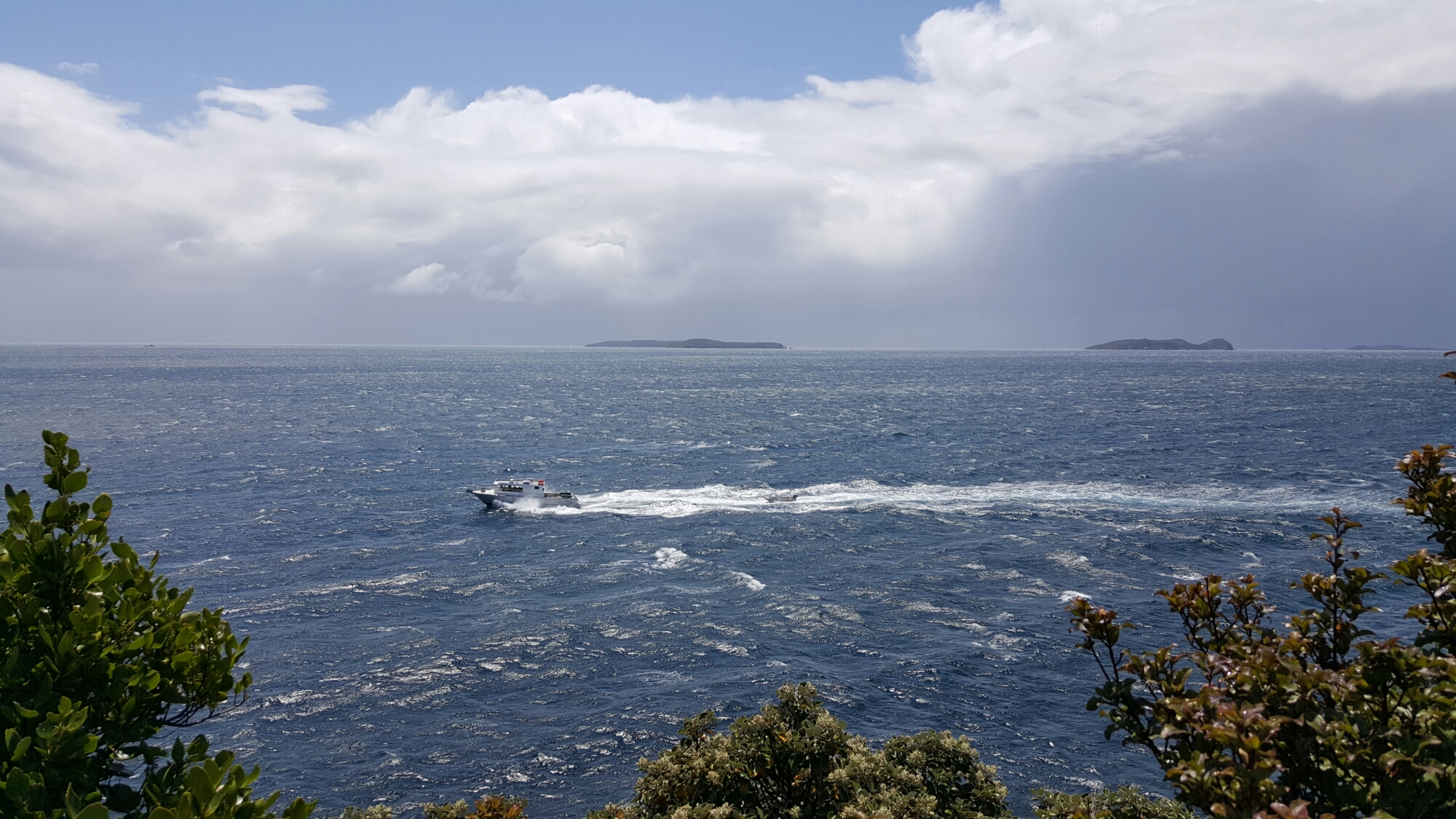 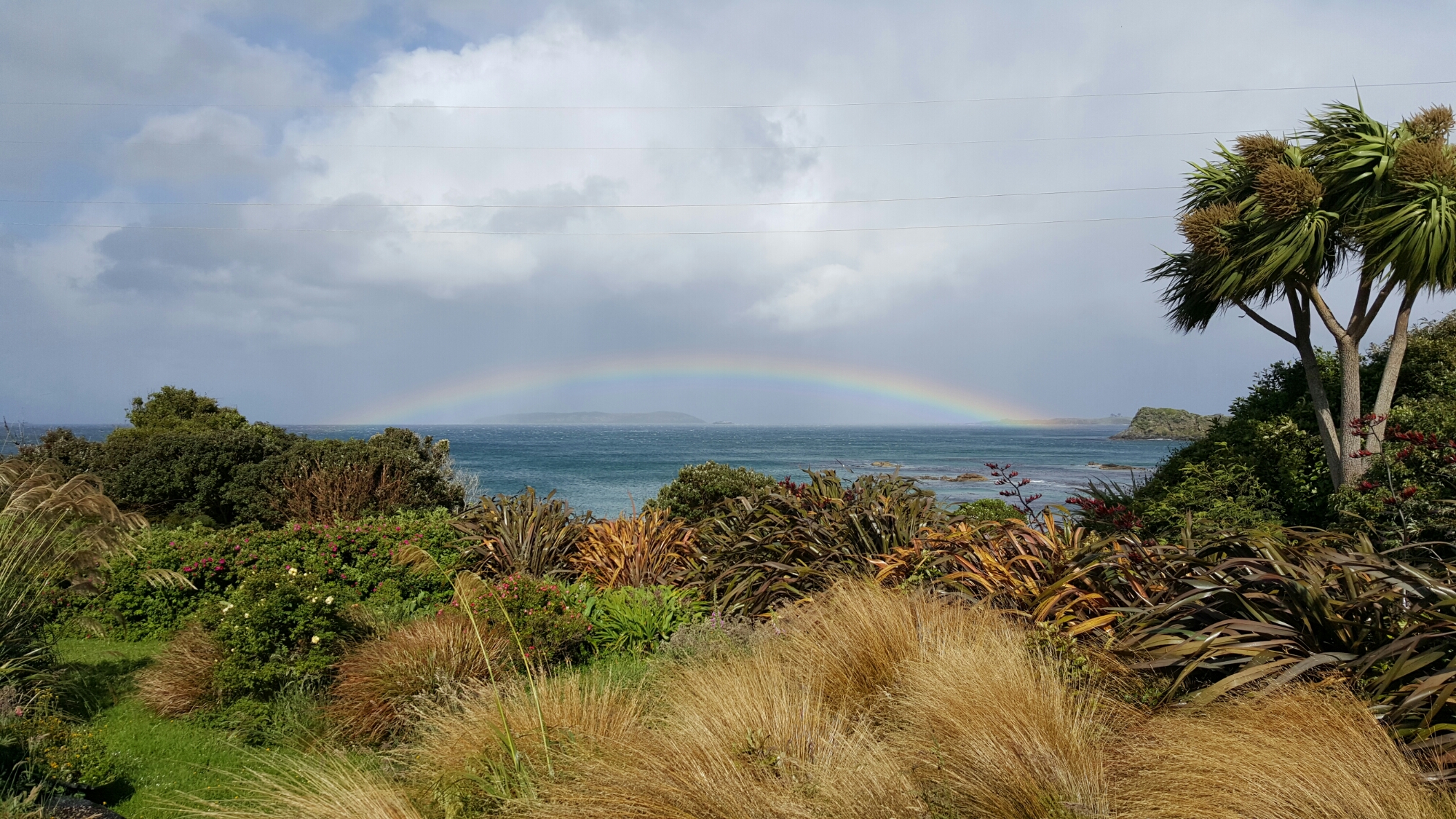 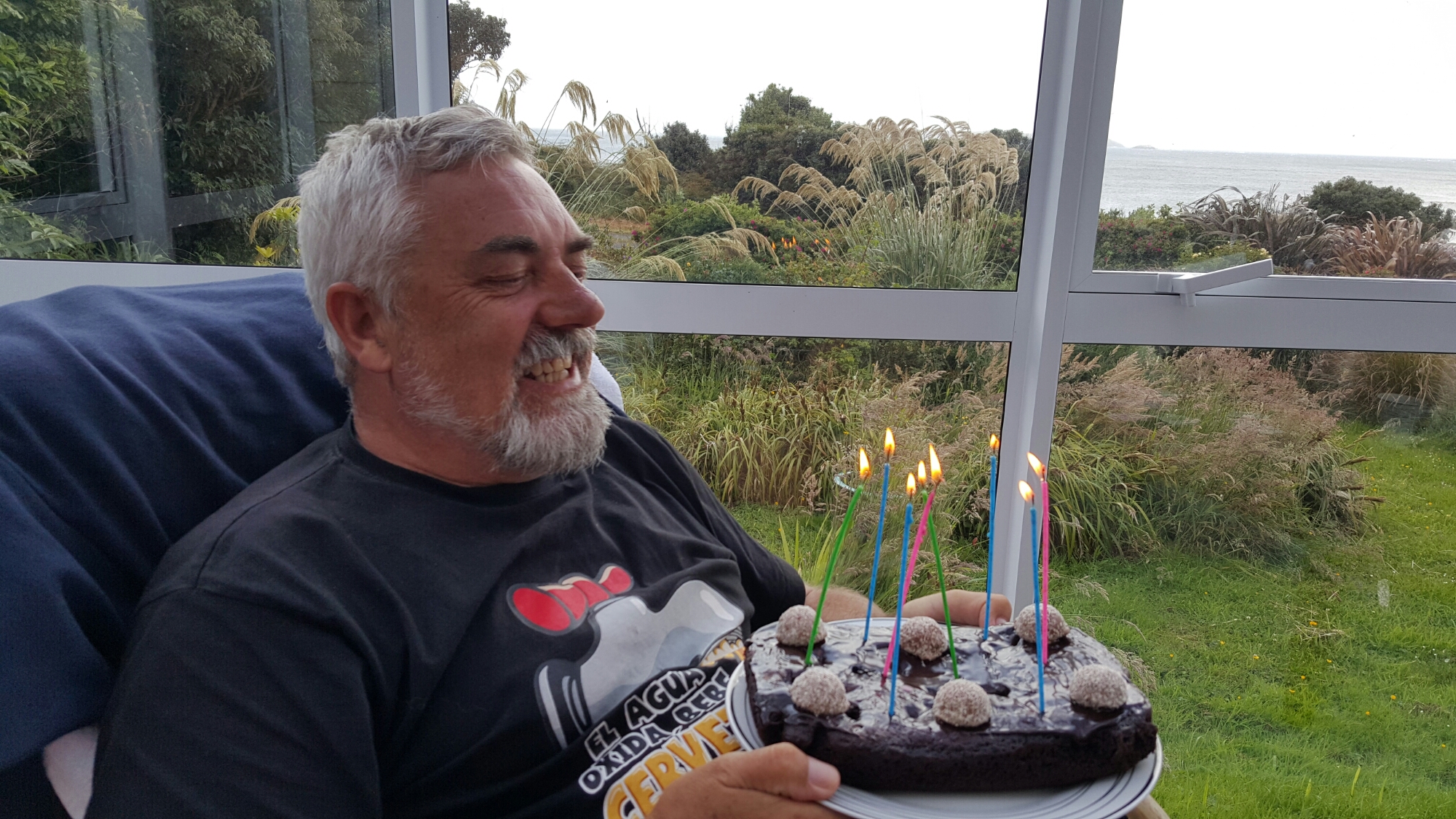