The weather forecast was for it to be fine but clouding over as the day progressed, winds to increase and gradually give way to showers the 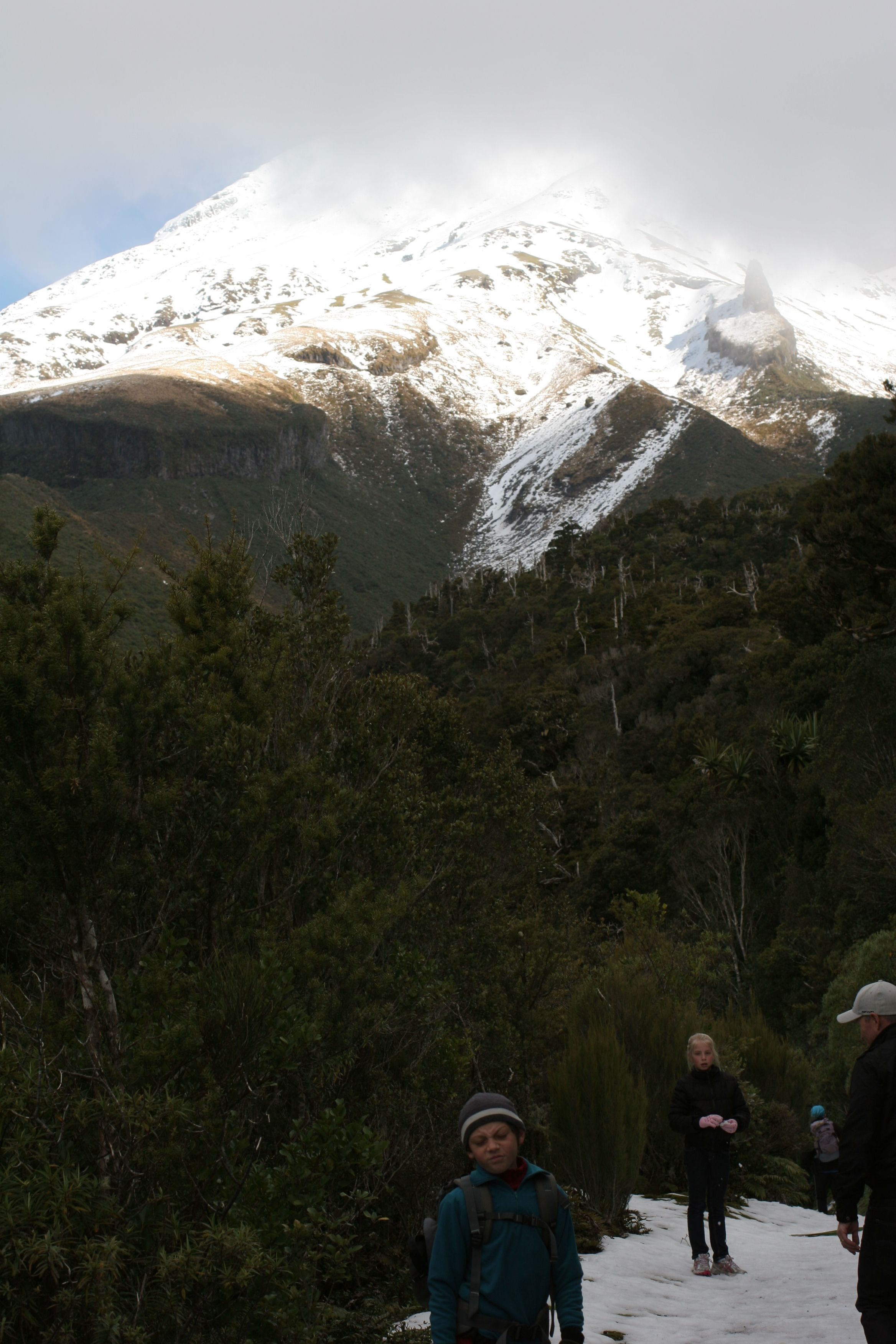 following evening. The rain would become heavier by Friday. If we wanted to go for a decent walk on the slopes of Taranaki it would have to be today! It was after 12.30pm before we finally got ourselves together and arrived at North Egmont Visitor Centre. We checked that the route we planned was okay to do in the conditions, had a dither in the display area and shop and bought a map. Taranaki was in cloud and it was pretty cold as we added layers in the carpark but soon we were off. As we walked the cloud blew this way and that, first covering the peak and then leaving it clear and proud. The bank of cloud that had looked like a pretty solid front moving in from the sea seemed to dissipate a bit as it came over and most of the afternoon was spent with the sun shining. The biting cold was tempered by the sun and our own exertions warmed us up and we gradually shed the layers we had put on back in the carpark. The unremitting upward nature of the walk was made easier by the sight of Taranaki in front of us, and whilst the view behind us of the valley was unclear and hazy the same could not be said of the Mounga in front of us. How tempting is its snowy peak and how envious am I of those who have the skill and nerve to climb it in winter conditions? 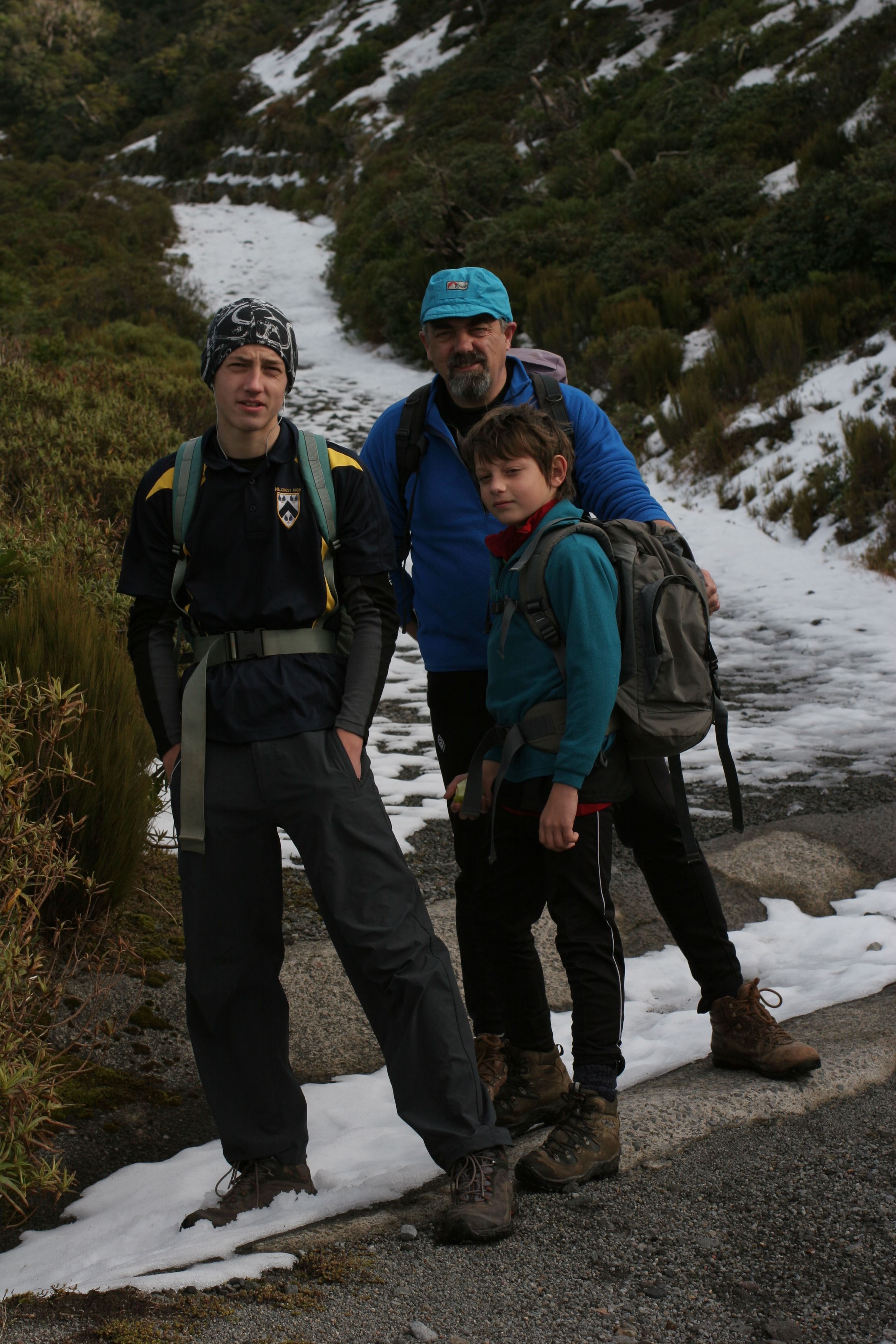 As usual, Lachlan strode out in front with Nigel keeping pace for a while. Aonghas struggled as always to get going and moaned and whined about this hurting and that hurting and it being too hard and too steep! We have had this introduction to walks ever since he was tiny, but after about half an hour, he gets into his groove and is away. He is always a talkative companion on a walk and he kept me entertained as we trudged up along the snowy track. We stopped every now and then to throw snowballs, scratch names in the snow and look at interesting things that Gus spotted and had to investigate! We had the Transmitter Tower in sight as our goal (even though the walk didn’t go there, it was at least a visible point for Gus to focus on) and when we reached the track junction Nigel and Lachlan 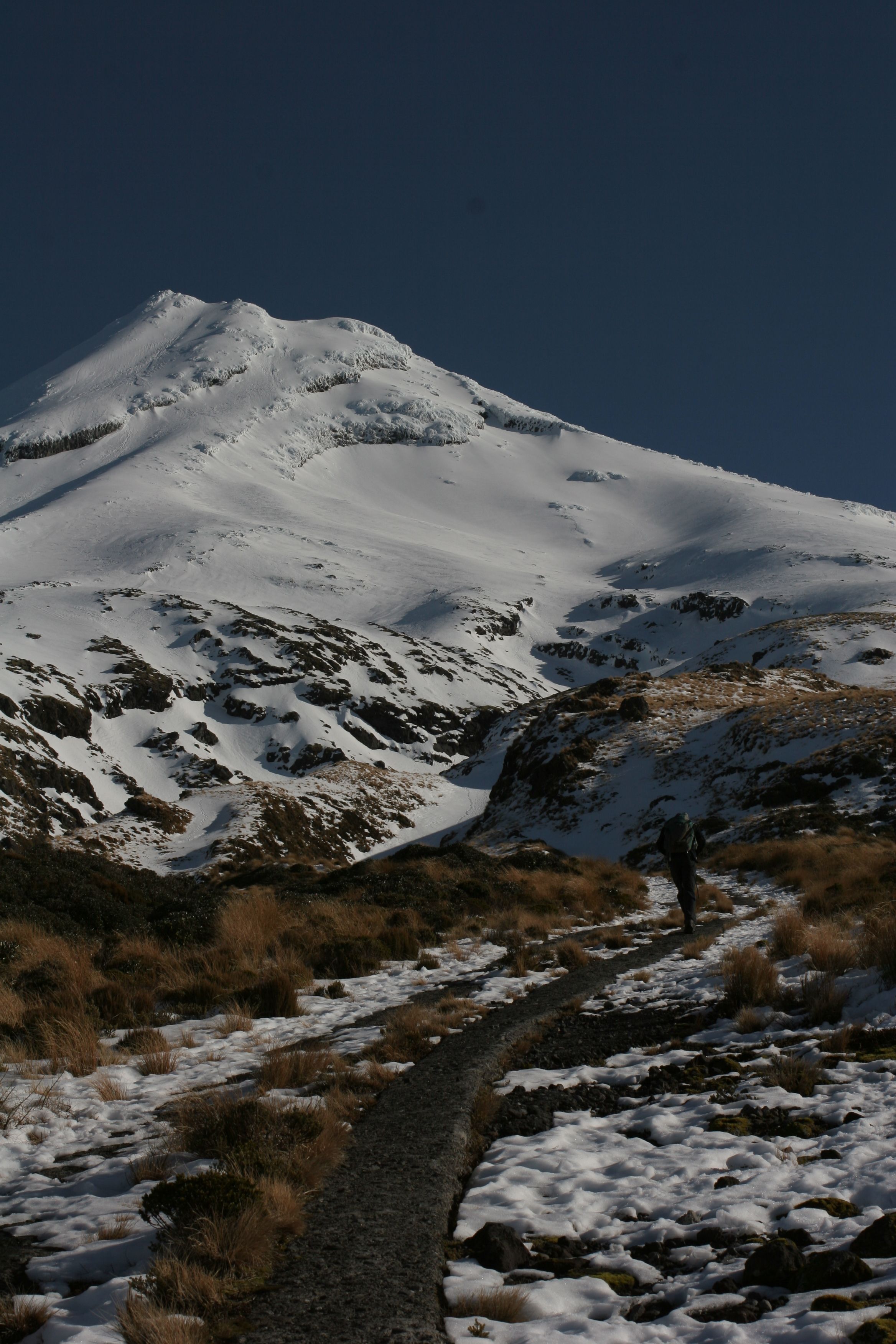 were waiting for us. To climb higher or ro head downhill? Gus wanted to go up, so did I; we spent some time looking at the mountain side trying to work out which was the North Ridge, and how what we could see on the map equated to what we could see in front of us. How we miss the good old 1:25,000 OS maps, the maps here just don’t have the detail we are used to! A couple of weather beaten mountaineers who had climbed up there in the morning were on their way down as we were talking. They pointed out the route they had taken and the best ways to go in different conditions; a seed has been sown and I am determined to reach the top someday, but probably in the Spring or Summer time when the conditions are more favourable. They said that the path up to the transmitter tower was icy so to take care. We started on up but as we came to a bend in the track and a handy bench the route onwards looked very steep and very snowy and was glinting icily in the sunshine where it wasn’t in shadow. I carried on to have a recce and decided it was probably okay but communicating to the rest of the family in the wind wasn’t easy. The cloud had started to billow round the end of the spur ominously; Nigel seemed to be signalling that he wasn’t happy about coming up, so I descended, a little disappointedly but knowing that it was a sensible decision. As we continued to descend to the hut the cloud enveloped the mighty mounga and the sun all but disappeared. Then the sun came out and Taranaki was unshrouded and standing proud once again, then the cloud swirled

around again… and so on for the rest of the afternoon.

The hut is simple but serviceable, and you can imagine how cosy it could be filled with the camaraderie of walkers, the wood burning stove blazing away, food being cooked and stories shared. Today, though, it was cold and empty and it felt a little forlorn. However, it afforded us some shelter from the wind whilst we ate some chocolate and had a drink before continuing down through the bush to the Visitor Centre. The route back was one of those frustrating ones where you climb down gullies on ladders only to regain the height lost on the other side. However, the ups and downs made the last kilometre or so more interesting and avoided that tired ache in the hips you get from trudging along a flat, boring path at the end of a long afternoon out!

Gus kept me entertained as we went, telling me all about when he did the Tongariro 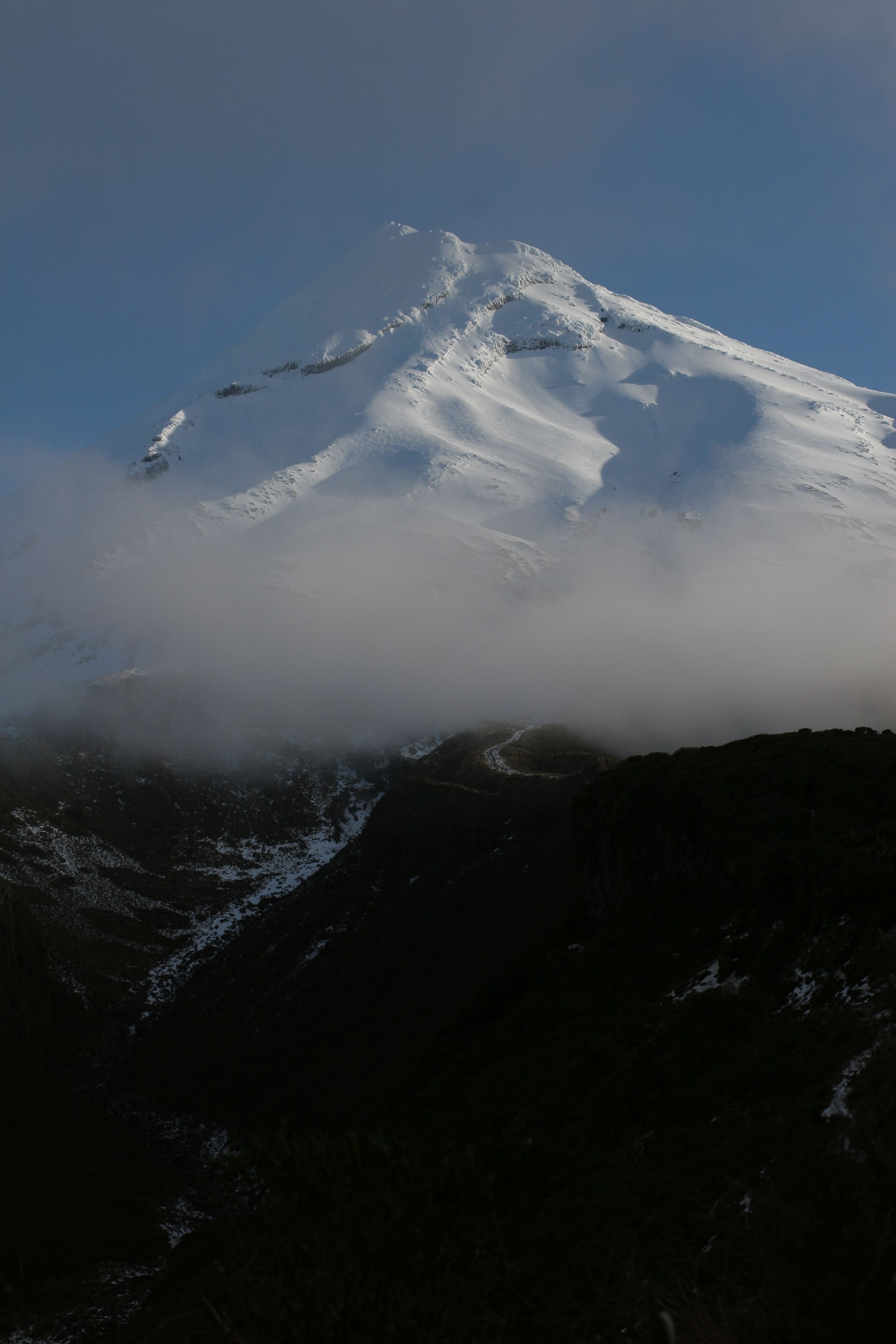 Crossing with Nigel and the Scouts. He says he finds it difficult to write at school when they have to do memoirs as he can’t remember anything – he didn’t have too many problems today once he was given a few prompts!

We arrived back to an empty carpark in the dusk of the evening, fell happily and tired into the car and back to the Bach on 45! 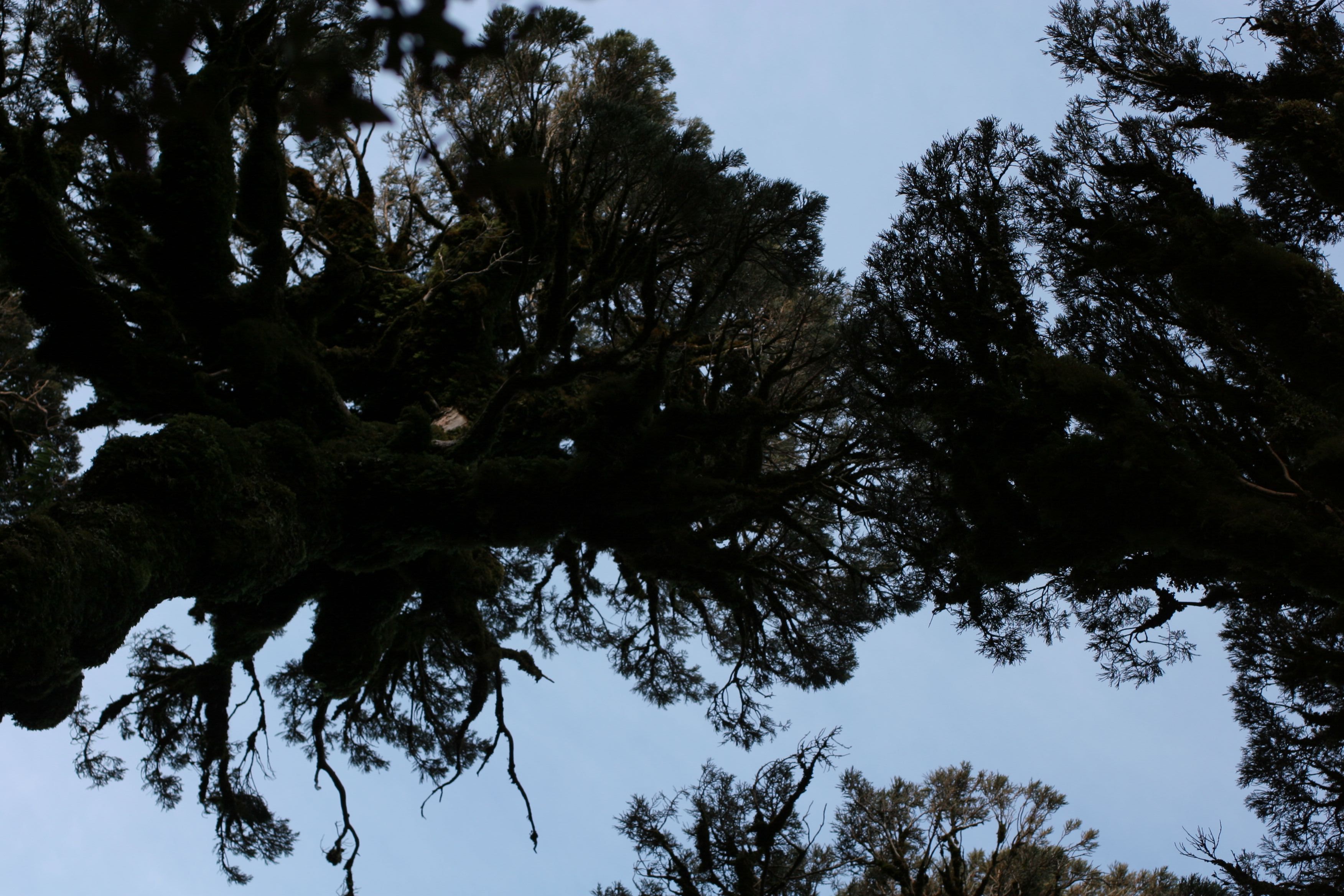