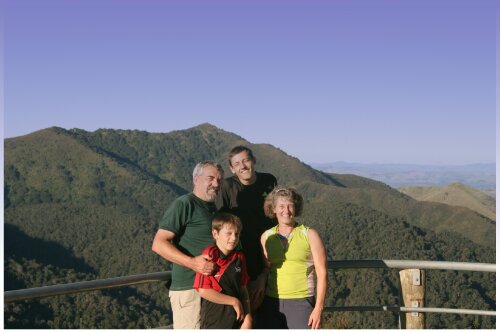 A week of glorious sunshine, high winds, torrential rain and mist and lots of fun! We had the use of Nigel’s Aunty Moira’s house for the week as she was down in Christchurch visiting Pete and his family. We have been down the a few times and explored a little bit more each time we go. We had also planned to be there to spend some time with Nigel’s other Aunty and Uncle in Silverstream as Brian had been diagnosed with a brain tumour over Christmas. Sadly, he died suddenly and unexpectedly a couple of weeks ago when treatment seemed to be going well and he was feeling much better.  However, being down there meant that we could spend some time with Chris once their boys had returned to their families overseas. So we spent the week shared between Wellington and the Wairarapa and got to know the windy road over the Rimutakas pretty well!

Driving down on Good Friday we were blessed with perfect weather but encountered our first real Bank Holiday traffic since arriving in NZ when it took us twice as long to get to Tirau than normal because the petrol station in Cambridge was just heaving and then for some reason there was a very long tailback out of Tirau itself! We stopped in Taupo for lunch and then in Bulls for “delecta-bull” ice-cream before crossing over The Saddle into the Wairarapa. It is amazing how some towns have the imagination and flair to play on something that marks them out from the rest. Bulls seems to be a pretty ordinary place but somebody, somewhere at sometime dreamed up the, let’s face it, corny “bull” joke and it stuck and everyone in the town got involved! We had fun going round finding them and giggling .

Going over the Saddle with the full moon lighting up the wind turbines that stand magestically on the hill, the thrum of their sails turning in the stillness of the night was quite an eerie experience. The photos that we took do not do them justice but they give an idea of the atmosphere.