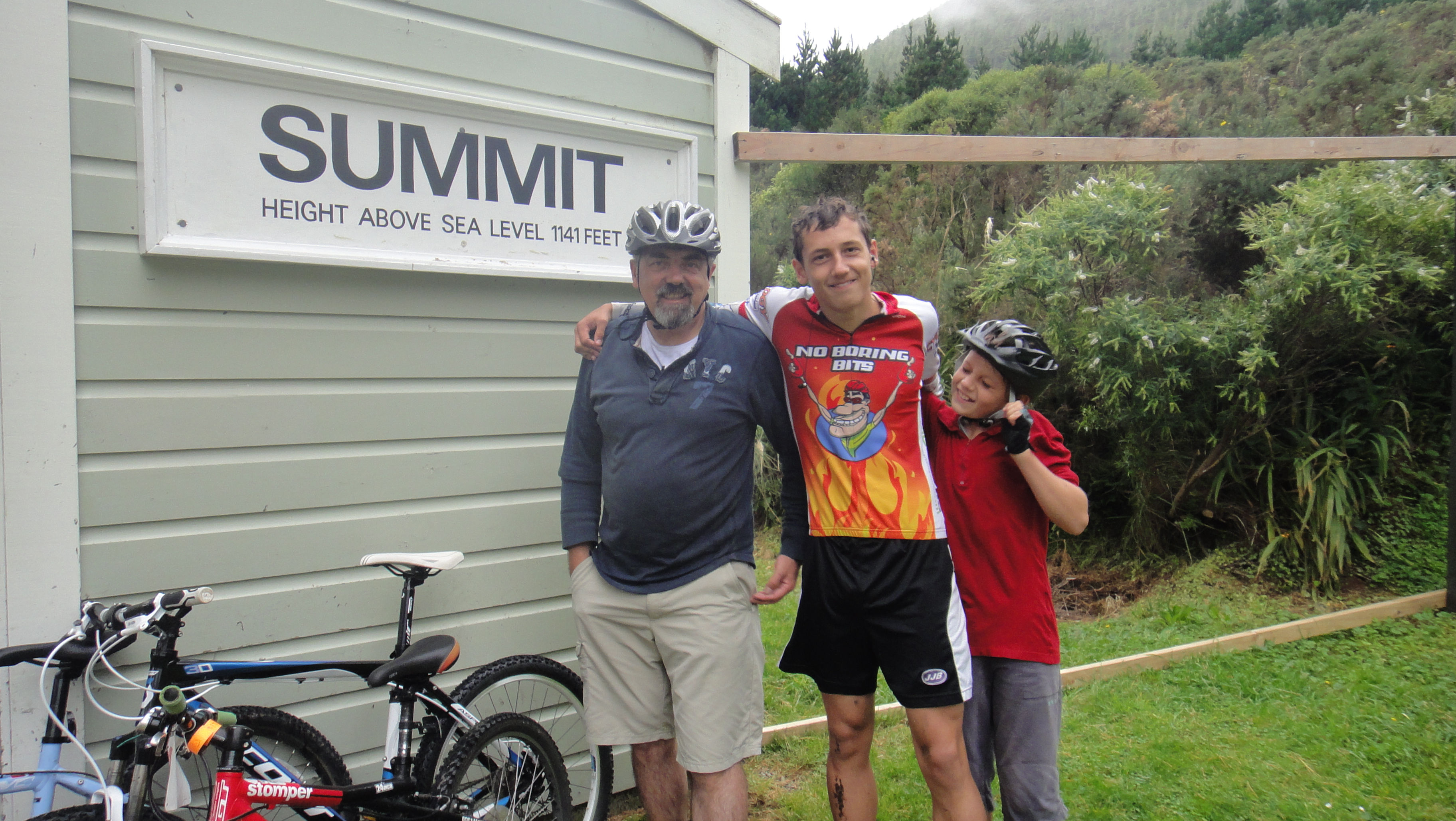 The Rimutaka Incline is an iconic piece if kiwi engineering which winds its way up and then down the valley linking Wellington with the Wairarapa. The track from the Featherstone end had to rise up a one in fifteen gradient and usually needed two or three engines working together to get the train up the hill. The track was specially designed with a central rail and  horizontal 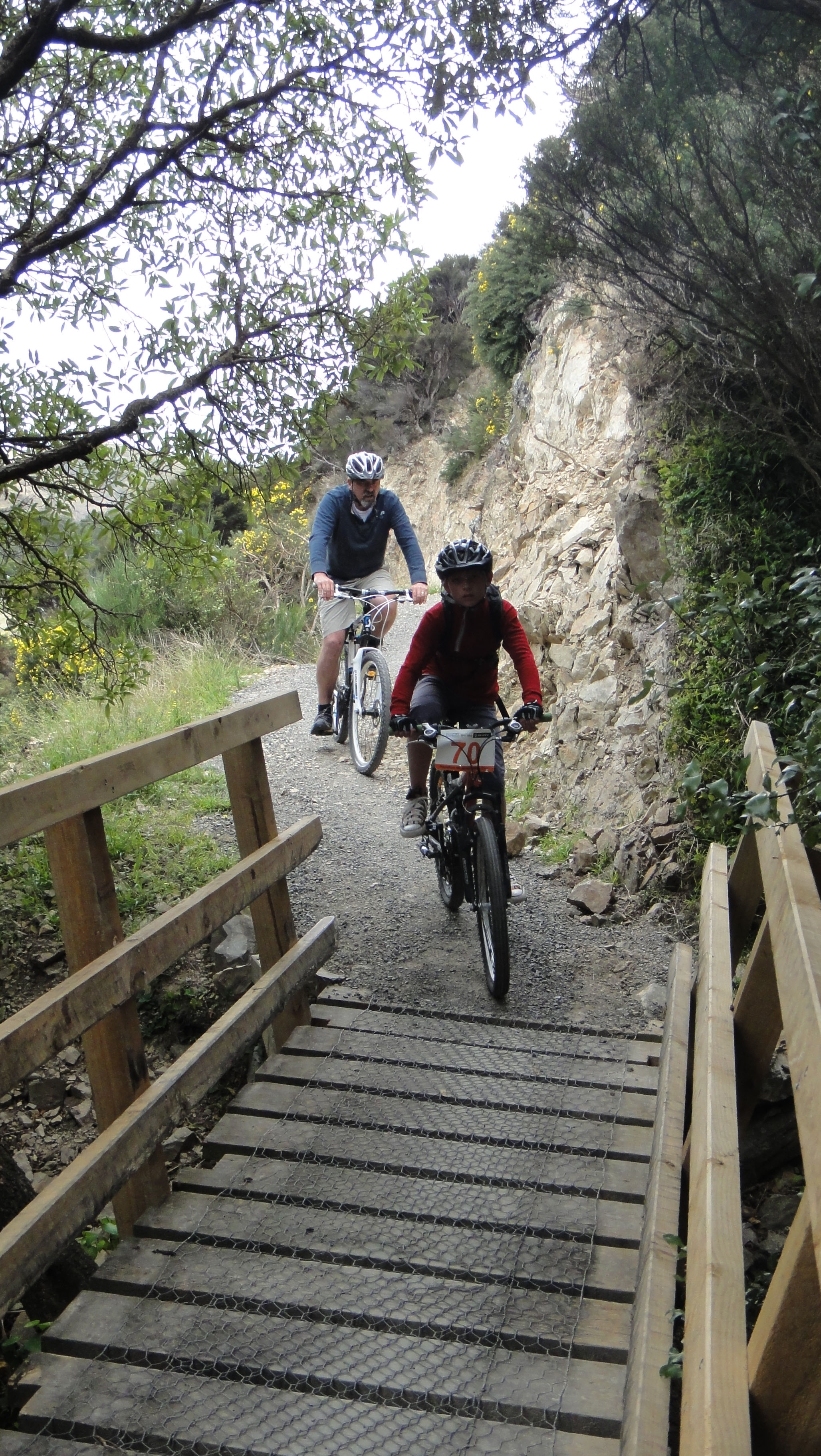 wheels to help with grip up the hill. The Wellington side from Kaitoke was a much gentler gradient and ordinary engines were used. At the summit station the engines swapped over. The line has now been replaced  with a more direct line through a tunnel and has been developed as an 18km (one way) walking and cycling track. Classified as a family friendly grade 1 to 2 track we decided it would be a good chance to get Nigel out on his bike!

We spent all week in the Wairarapa working out how we could manage to cycle over without having to drive over the Rimutakas twice as well and decided in the end that we couldn’t!  We could, of course have ridden there and back but felt that 36km might be too much (at least for Gus and Nigel!!) Having done the trip over the hill 3 days out of the four we had already been there and were planning on doing it again on the last day we were keen not to have to negotiate the windy road up and over the Rimutakas again if we could help it. So we decided that we would go from the Featherstone end, see how far we got and then  ride back.

We had clearly waited for the end of the good weather before we decided to attack it – after 4 days of beautiful sunshine we awoke to a cloudy, mizzly sort of a day.  However, it wasn’t forecast to rain until late afternoon and the next day was destined for heavy rain so we went for it!  The first part of the ride rises steadily along a gravelled track with a hillside on your left and the valley on your right.  We rode through some open bush, crossed streams until we came to Cross Creek. This was the village which marked the end of the steep section and where the Fell engines would be swapped for ordinary engines.   We stood and tried to imagine how the place would have looked with trains spewing their steam, and chugging through the station, the noise and the hubbub of coalmen shovelling coal into the engines, guards blowing whistles, passengers climbing on and off trains,  the children playing and the inhabitants of Cross Creek going about their normal daily business.  Once a bustling 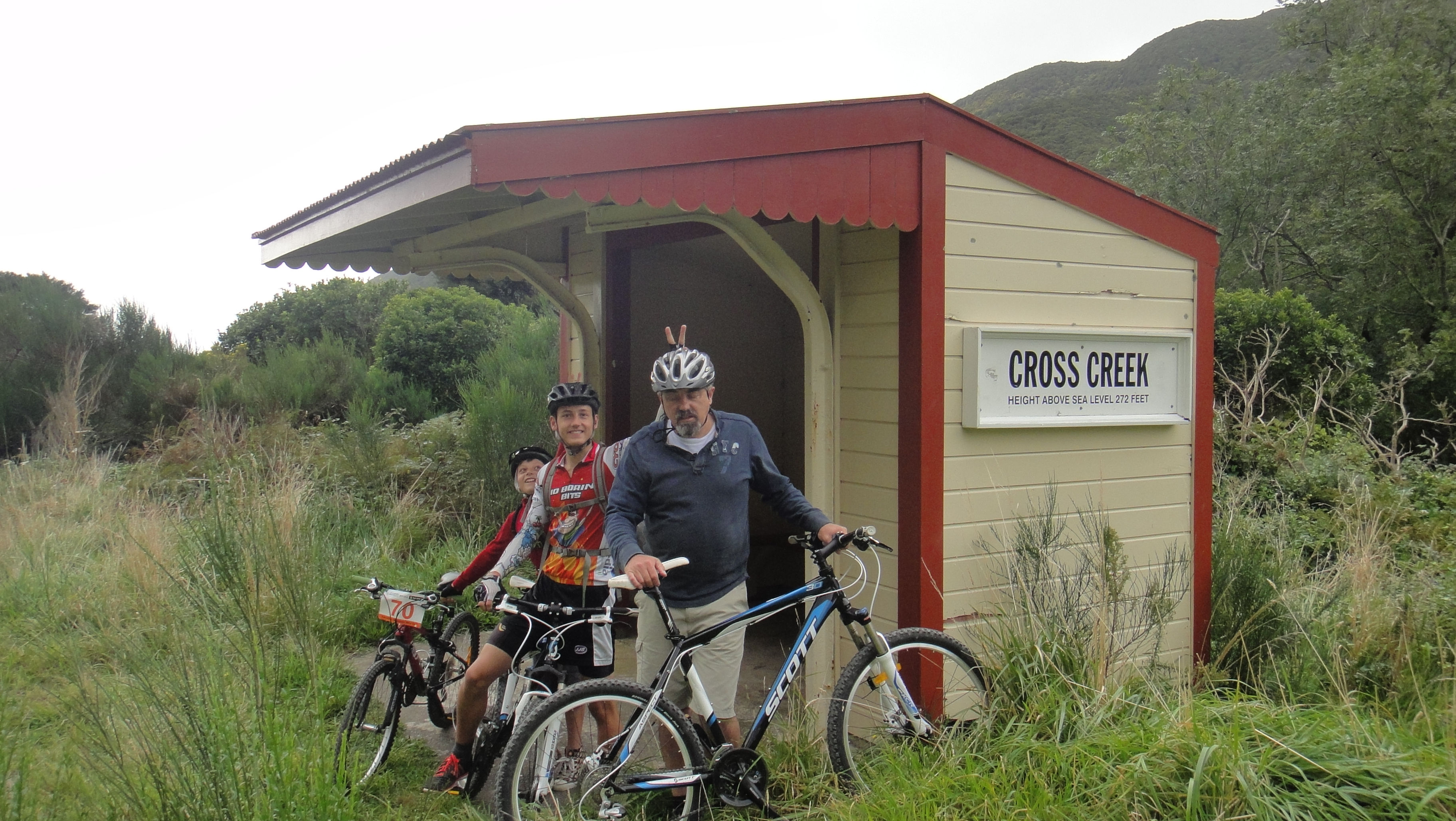 village that had a school, a swimming pool, tennis courts and bars, it is now overgrown with bush and there is little evidence of habitation.  We did spot the concrete area that had been the tennis courts and there are also remnants of the engine sidings and the turntable.  A small station shelter marks the place that was once a hub of activity and now that all that has gone, nature is reclaiming and it is calm and peaceful.

We turn left up the valley and the real climb begins; there are information boards along the way that afford some respite from the unrelenting incline and we gladly stopped to read them. There was just enough information – bite-sized chunks that were easy to read and told you what you wanted to know! Lachlan left us in his wake as he sped up the hill but he waited at each marker.  It was a good family ride in as much as we could all ride at our own pace but there was no togetherness about it! On that sort of gradient you just need to find your rhythm and go with it.  The track wound up and following the valley gradually crossing the contours of the hill.   When your eyes are fixed on the bit of ground in front of you as you push the pedals round, glancing occasionally at the next milestone ahead of you willing it to get closer, you don’t feel like you are making much progress.  However, looking back down the valley at each marker made us 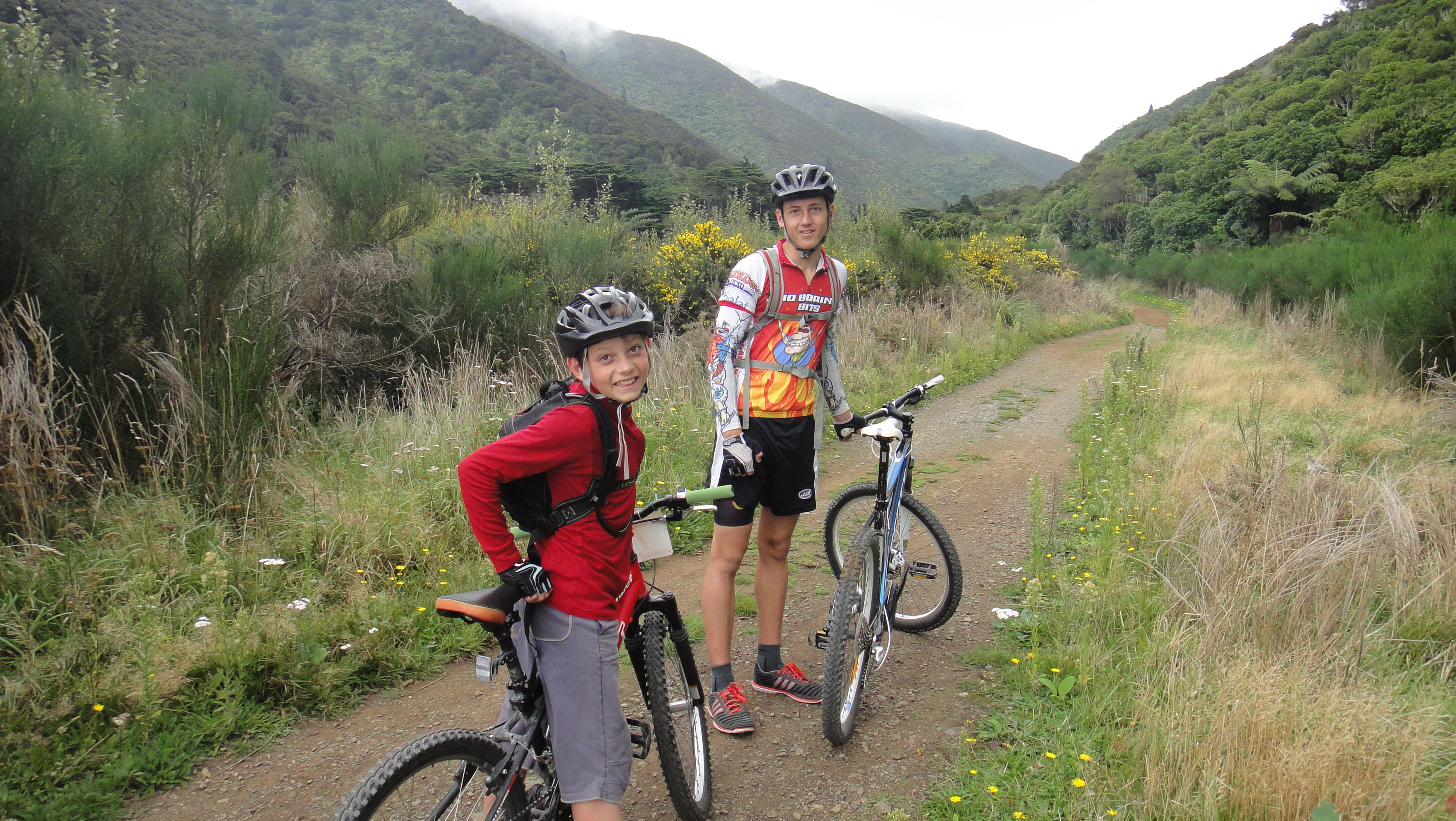 realise just how far we had come.  We soon came to the first tunnel and cycled in to the dark with a little trepidation. We had forgotten to bring any lights but the documentation we had read about the route said that you didn’t really need any!  Fortunately a few yards in you can see around the bend and the tunnel is short enough that the light from each mouth is enough to make out the ground once your eyes get used to the darkness. Nevertheless it was a bit eerie!  When we came out the other side we read that the tunnel was named Price’s Tunnel after a manager on the rail contract and that two workers had been killed when the roof caved in during construction of the tunnel.  Life in the 1800s was tough and it brought to mind the number of workers who had died during the construction of the Ribblehead Viaduct on the famous Settle-Carlisle railway that spans the valley in a beautiful curve. Many people maintained that it was impossible to build a viaduct on a curve; it was achieved but not without the loss of around a hundred navvies who worked on it. 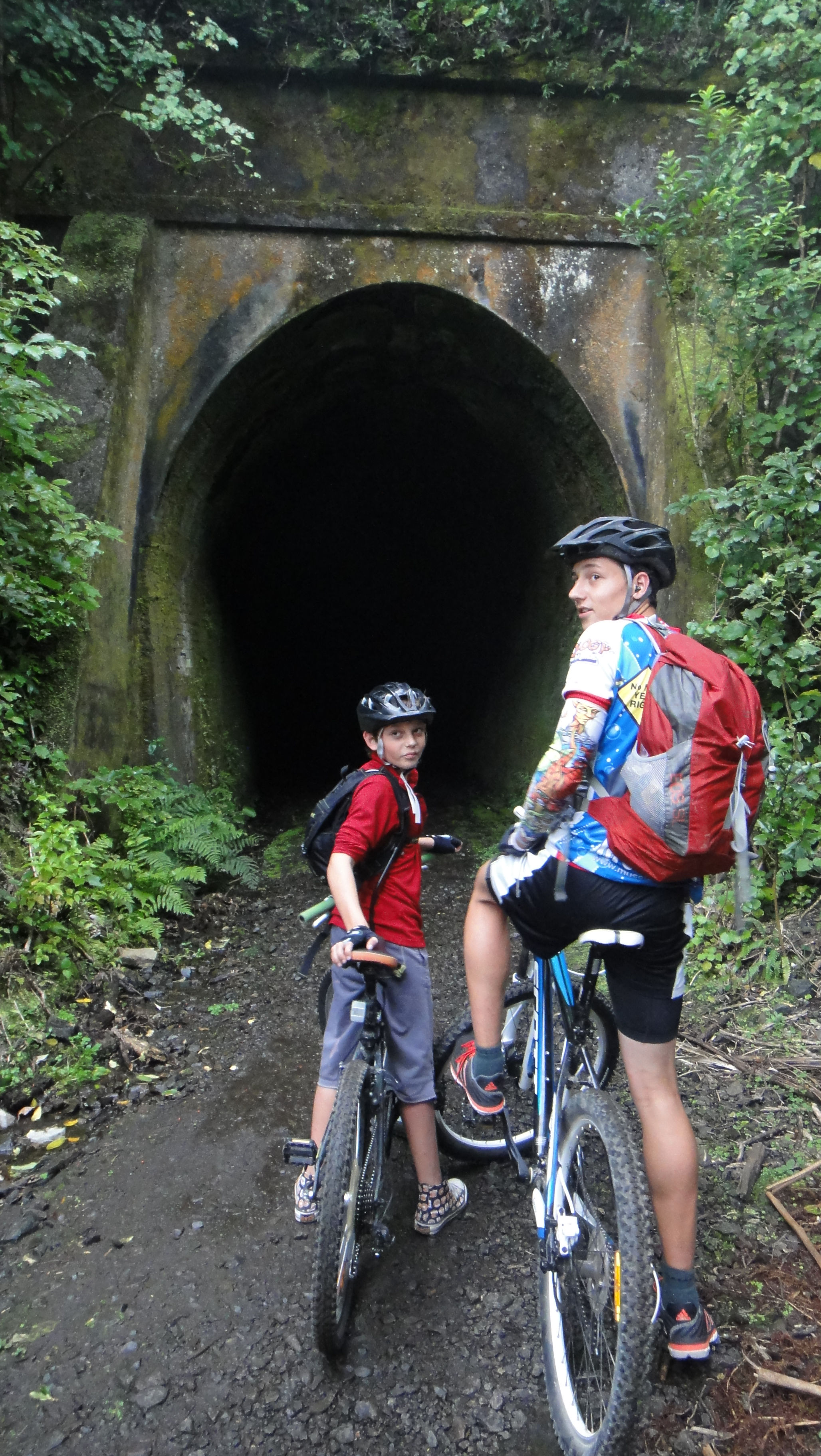 Anyway, we continued onwards and upwards,  and as we rode the hills and features appeared and disappeared as the mist swirled around.  Siberia Gully seemed very well named by the time we reached it; bleak and grey in the mist!  Apparently it used to be known as Horseshoe Gully because of its shape but the workers soon renamed it Siberia because of the bleak wind that blew through it.  There used to be a bridge spanning the gully but all that remains today is the concrete drainage tower that diverted the stream.  It was the scene of the only fatal accident in the history of the railway when on “11th September 1880 a gust of wind hit a train broadside pitching three carriages over the embankment.”  Four children died and several other adults were injured.  Since the railway closed in the 1950s the floods have washed the retaining wall and the bridge away. It was the only place on the ride that we were forced to dismount to climb down the steep gully side into the stream and then make our way back up again.  The uninviting sounding Siberia Tunnel awaited us – it is 109 metres long and with a gradient of 1:13 it is the steepest of the sections on the Incline.  No problem here except that going uphill in the dark is a little unnerving, but as in the previous tunnel there was just enough light for us to see where we were going. 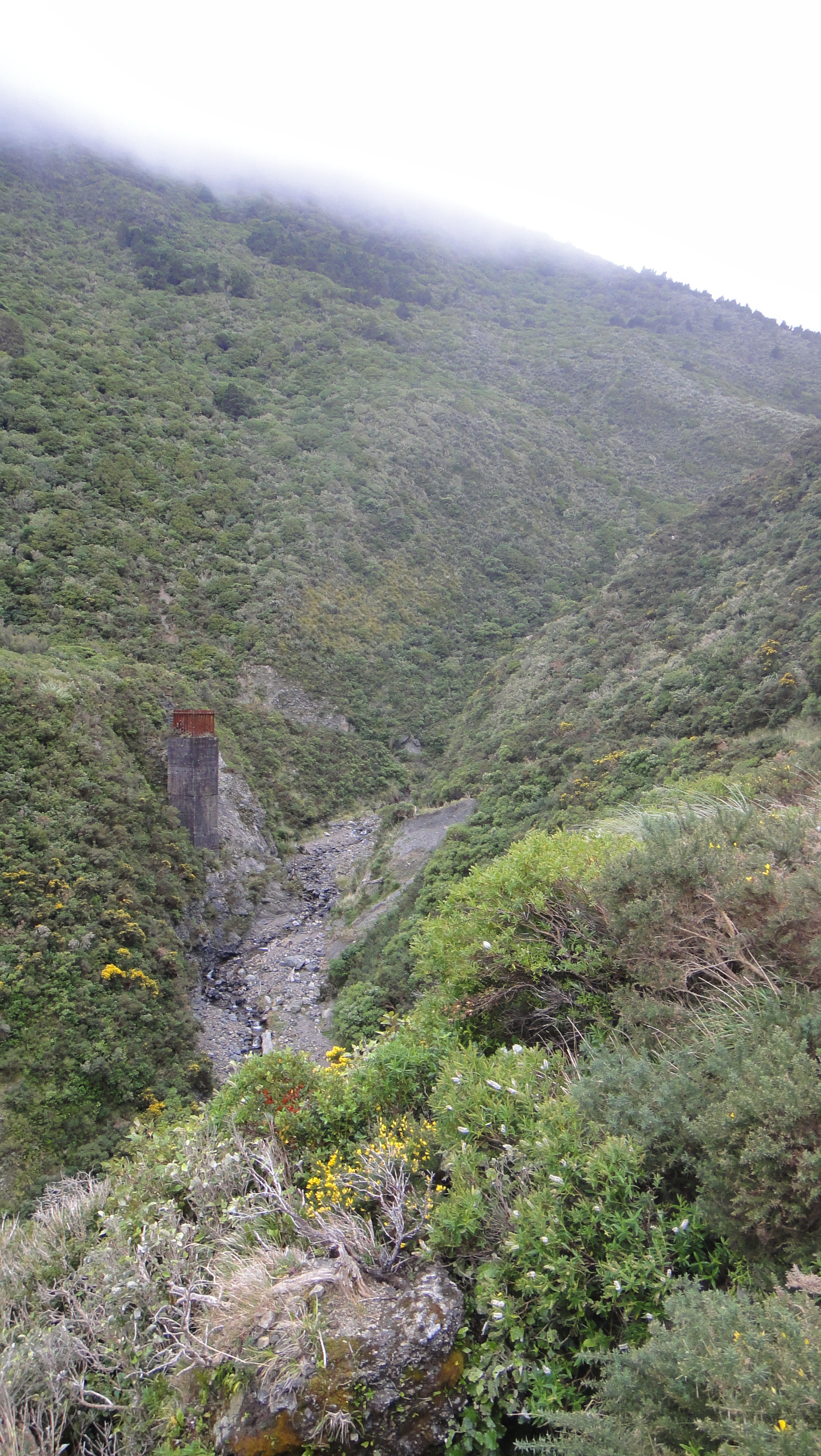 We were making steady progress, in fact probably faster than the trains used to do it!  Apparently the engines took, on average around 45 minutes to an hour to climb the incline, slow enough for people to jump off the train pick some daisies and jump back on again as it came round the bend!  Not far to go now though – we were heading for the Top of the World and then the Summit!  But first we had to negotiate the Summit tunnel, all 580 metres of it.  That’s more than half a kilometre in the dark!  Just as well we didn’t get to see the information markers before we went in!  At first glance it seemed like it would be easier because we could see the end – a dead straight tunnel despite the slight rise and then fall that the hump in the middle suggested.  This was not to be the case; Lachlan hung back not wanting to lead the way, in fact we all hesitated at the entrance until I decided that one of us had to go first!  The problem was that as I rode further into the tunnel the brightness of the light at the end of it effectively blinded me completely and I could see absolutely nothing in front of me or on either side.  Aonghas shrieked as we went through, in fact we all made quite a lot of noises as we negotiated little dips and bumps. Only Nigel was silent at the back.  I had no idea where the walls were or where the floor was which is very unbalancing, I couldn’t work out whether I was going in a straight line or whether I was going to crash into the wall of the tunnel at any moment!  I concentrated on looking straight ahead and hoping that there were no holes in the floor or obstacles that could send me flying headlong.  Eventually I got closer to the end and the natural light was enough to illuminate the ground and the walls, my confidence started to return and I increased my pace happy to be out the other side, the boys actually overtook me once they could see too, racing past me and abandoning Nigel in the middle of the tunnel on his own!  I went back in to accompany him out and after that it was only a short ride to the Summit Station. 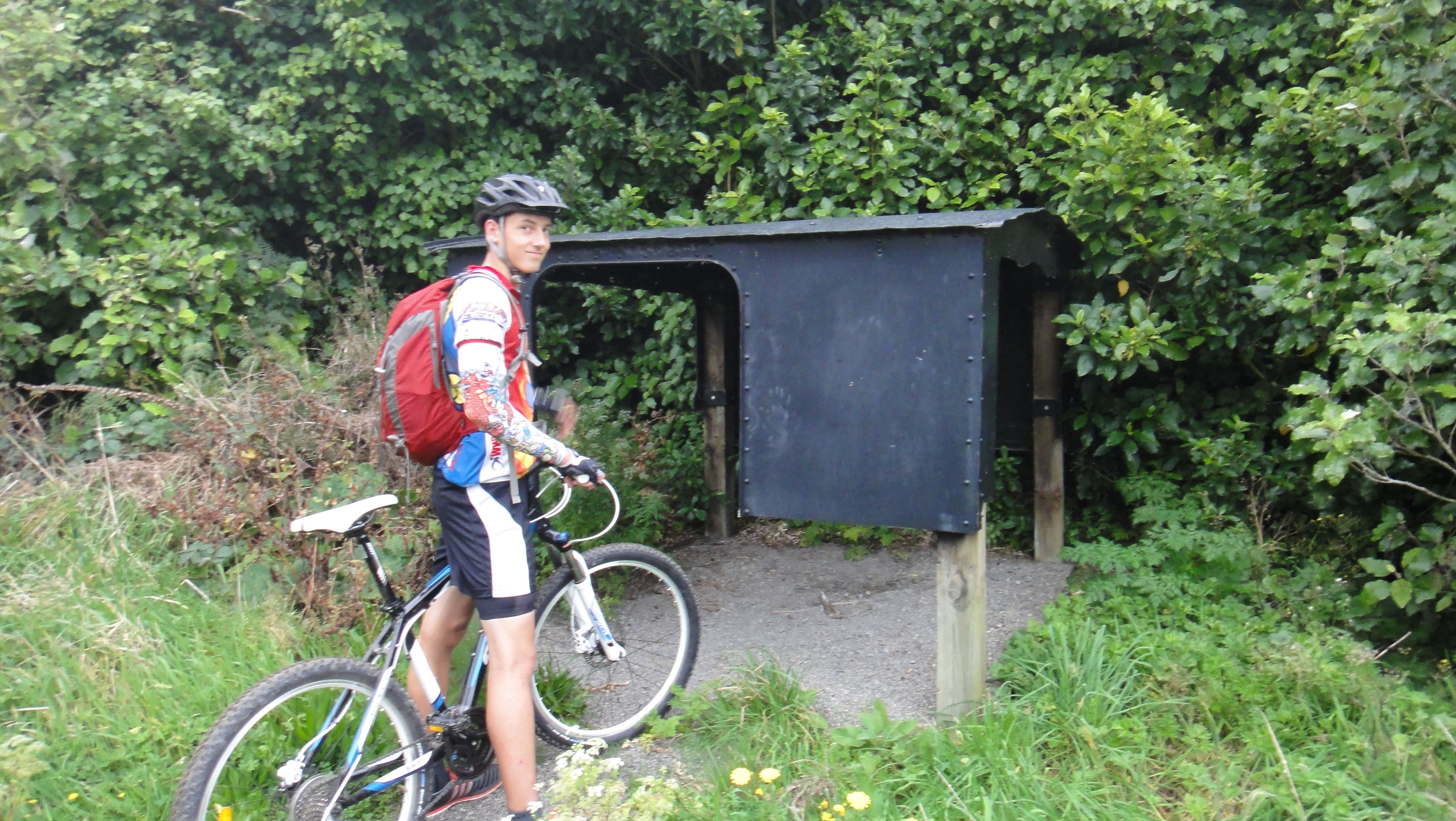 Nowadays the summit station has a wonderful feel about it; by the time we arrived the sun was out and we were above the mist so the place seemed peaceful and quite appealing.  We spent a good half an hour wandering around looking at the rusting hulks of engines that remain, imagining the corroded pipes and fireboxes red hot with burning coal and generating steam to drive them along the railway. The hills encircle the plateau and in the late summer sun it we thought it would have been a fantastic place to live but then we looked again and thought about how it must be when the cold southerly wind is blowing, the sun is not shining and the sky is grey.  In the days of the railway the once heavily vegetated hillsides were devastated by the ash and half burnt coals that the engines spewed out.  Fires were frequent and the forests burned down.  Pictures of the landscape in the late 1800s and early 1900s show bleak, empty hillsides, denuded of the natural flora that had existed hitherto.  Over the last 70 yrs the vegetation has regenerated somewhat and scrub and low lying shrubs have invaded so it is difficult to imagine what it would have looked like when the summit station was busy with traffic and the daily comings and goings of its inhabitants.

Eventually, and maybe a little reluctantly as I think we were all rather unsure about going back into the tunnel, we set off on our return journey.  The tunnel actually didn’t seem so bad on the way back although Aonghas did manage to cycle into the wall, and then the fun began. The benefit of climbing a hill is the return journey and this was a good one – 6 or 7 km of downhill which we did more or less non-stop!  It was a bit rattly on the old arms and I had to keep shifting my feet and alternating which foot was at the front and which was behind as my muscles started to burn (standing on the pedals is advised unless you want a very sore bum!) but it was exhilarating and far easier than going up!  Lachlan made it all the way down in about 10 minutes and we were not far behind!  We were back down into the mist and the temperature had certainly dropped but that didn’t stop us exploring a little bit at Cross Creek before the final leg back to the car park.

What a great afternoon, definitely fun for all the family and I didn’t even have sore legs the next day!